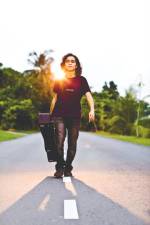 THE song Lori Hantu (Ghost Truck) is – as Azmyl Yunor puts it – a track about illegal sand mining, overdevelopment and the impact of construction on the environment in the area south of Kuala Lumpur, as seen from his neighbourhood in Bangi.

Although the title and subject matter may sound like a parody, this is an example of the genre known as folk-rock, which is synonymous with the works of music legends like Bob Dylan and Neil Young.

Lori Hantu is the first single off John Bangi Blues, an upcoming album by Azmyl, a multilingual singer-songwriter, multi-instrumentalist, academic, and writer.

The song, along with its lo-fi music video, which was directed and conceptualised by Sabahan film student Graeme Tan, is the embodiment of Malaysian folk-rock. It uses simple language and melodies to express and address an issue currently facing the people.

“I’ve always been interested in using everyday language – colloquial language – as opposed to formal and maybe classical forms of the Malay and English language,” said Azmyl.

“In terms of Malay language, I grew up in the 1980s and ‘90s where Bahasa Baku was promoted in school, and it just seemed very strange because you would see it being used in songs, television dramas and films, and this did not reflect the reality of how Malaysians spoke in real life.

“And also growing up in the 1980s, Bahasa Melayu was ours as a nation – it wasn’t just [for] songs sung by Malays.”

Azmyl’s use of everyday language in music is apparent in a series of seven songs he released on May 9 as part of the PKP EP. The album includes tracks with titles such as Sosial Distancing, D.U.D.U.K. and Lagu Tak Mandi.

Like Lori Hantu, the subject matter of these songs may sound humorous, but the sincerity of the language used and the nature of folk-rock turns them into something catchy and relatable.

“The approach to writing songs in English and Malay is very different to me – this is probably because of [the] different nature and forms [of the languages],” said Azmyl.

“People often find my Malay songs more intriguing because I don’t sing in Bahasa Baku – its reflective of the places I grew up, which are Kuala Lumpur and Selangor – and also the use of words that you often don’t find used in lyrics by [ordinary] pop singers”.

He added that the number of Malay songs in John Bangi Blues outnumbers the English ones, compared to his previous albums.

“Language is beautiful, we should be more playful with it,” said Azmyl.

His use of everyday language in songs is also an echo of a bygone era in Malaysian music.

“The pop bands and singers who sang in Malay were multiracial up to the 1980s. I think this trend ended when the great Sudirman passed away,” said Azmyl. “He really united the country, not only as a pop icon but as a national figure.

“To me he was also a folk singer. He wrote Balik Kampung and Aku Penganggur; although his hits were often written by other composers, you can’t beat Balik Kampung – if children can sing your song, then you’ve entered the popular lexicon”.

We have all been taught that music brings us together. However, the reality is different, especially in a multicultural and multilingual modern society like ours. And independent musicians like Azmyl see this disparity clearly.

“The current music industry is very divisive, as major labels try to focus on specific language-based markets. I think we need to reclaim the language as ours, collectively, not just as a language only associated with a particular race or ethnicity.

“I don’t see any mainstream singers or composers making language exciting again, everyone is just being safe and formulaic.”

As the saying goes, you can’t love what you don’t know, and as a multilingual and multi-instrument musician, Azmyl knows how to play the acoustic guitar, electric guitar, harmonica, piano, keyboard, mandolin, banjo, and lap steel guitar.

“So far I can speak three languages: Malay, English and Iban; my wife is an indigenous Iban from Sarawak,” said Azmyl. “Of course being Malaysian, I can curse and swear in at least three languages – more if you consider the different Chinese dialects.

“[In real life] we combine languages – like Manglish, as they call it – plus add in local dialects and expressions. To me, this is the real Malaysian language of Malaysian folks.”