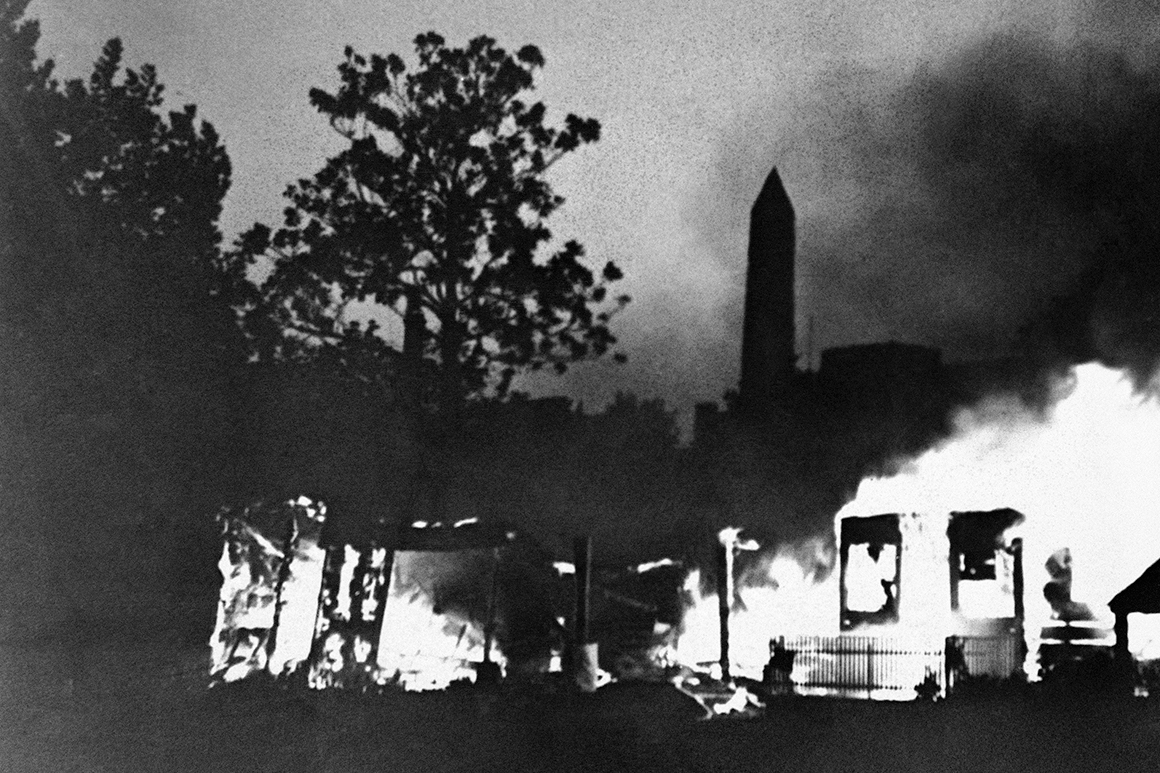 So were a slew of retired senior military officials and uniformed officers, among them former Secretary of Defense James Mattis, former Chairman of the Joint Chiefs of Staff Mike Mullen, and former director of the National Security Agency Michael Hayden, all of whom expressed their outrage at Trump’s militaristic response to the peaceful assembly in Lafayette Park.

There are also lessons from the original Battle of Washington for the current commander-in-chief, and anyone else curious about President Donald Trump’s 2020 prospects—including the effect that Hoover’s militarized response to the disorder on his front yard had on his re-election campaign. As Trump meditates further escalating his own Battle of Washington, he would do well to recall what happened the last time a president ordered troops to clear Pennsylvania Avenue.

Herbert Clark Hoover, who took office at the onset of the Great Depression, was one of the unluckiest men to occupy the Oval Office. Intelligent, competent, self-effacing to a fault, he had a stellar record of public service behind him when he was elected in 1928, most notably his acclaimed work as head of the life-giving U.S. Food Administration during World War I, and the American Relief Administration afterwards when he strove to provide food for the starving masses of Central and Eastern Europe. But unfortunately, the good will that Hoover had accrued quickly dissipated after the stock market crashed in October 1929. Matters were not helped by the former engineer’s stubborn opposition to involving the federal government in alleviating the human toll of the historic depression that followed. By 1931 unemployment had reached 15 percent, breadlines filled the country’s streets and hordes of miserable Americans were encamped in decrepit shantytowns, or “Hoovervilles” as they were called. Hoover’s name had become a synonym for indifference.

By 1932, the third year of the economic catastrophe, this national tableau of misery had set the stage for a dramatic confrontation.

In 1924, when the economy had been strong, Congress had passed the World War Adjusted Compensation Act, awarding bonuses to surviving veterans of the Allied Expeditionary Force, as the American servicemen who sailed to France to fight against the Central Powers during World War I were called, as a gesture of gratitude for their service. There was a catch, however: The “bonus” certificates, which would have been worth approximately $ 500 plus compounded interest, were not redeemable until 1945.

One former sergeant and combat veteran from the Great War, Walter Waters of Portland, Oregon, decided that wasn’t good enough. Like many, if not most of the surviving veterans, by 1932 Waters was unemployed. He wanted his money now. At a Portland veterans’ meeting in March, Waters raised the idea of descending on Washington en masse to pressure Congress to paying the bonus immediately.

Thus the so-called Bonus Expeditionary Force—also known as the Bonus Marchers or the Bonus Army—was formed. In the late spring of 1932, the ragtag “army” of 17,000 veterans and their families, led by the charismatic Waters, descended on Washington by foot, truck and train to demand their pay.