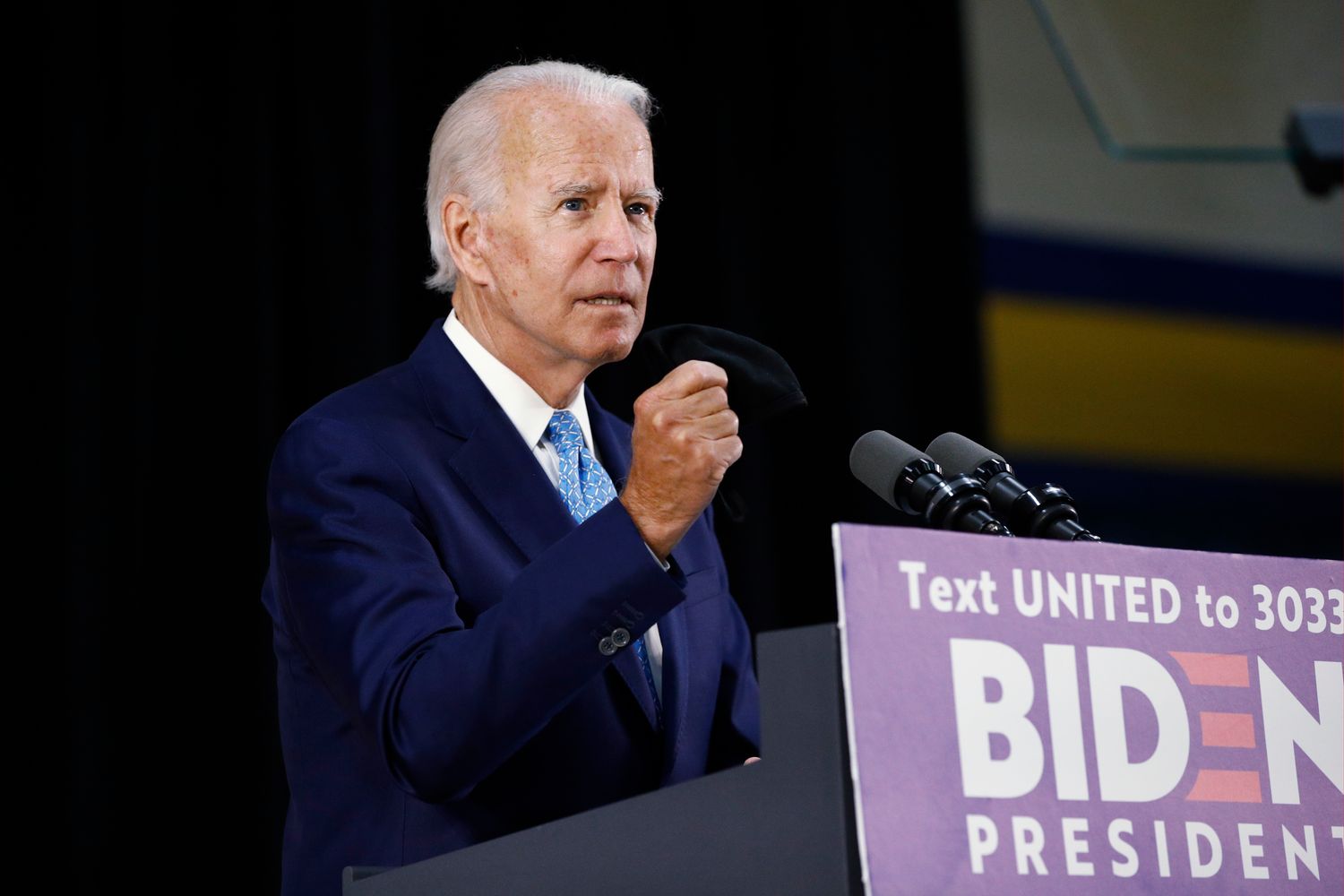 Another flashpoint over marijuana ended similarly: Sanders’ team argued in private meetings that they should legalize cannabis, but that idea was rejected. One task force member described the disagreements over qualified immunity and pot as “huge battles,” and multiple people involved said the criminal justice panel presented some of the biggest challenges for compromise.

“The vice president needs to figure out how he can step up and also catch up, frankly, to where the American people are headed in terms of wanting to have a real significant shift in how we think about things like policing and criminalization of marijuana and other drugs,” said Scott Roberts, senior director of criminal justice campaigns for the civil rights organization Color of Change. “He still seems to embrace kind of a law-and-order lite.” Roberts, who was not on the task force, added that Biden is fortunate that he’s running against President Donald Trump, whom he called a “white supremacist and vocal opponent of the Black Lives Matter movement.”

On several other task forces created by Biden and Sanders, progressives celebrated Wednesday that they won concessions, nudging allies and aides to the presumptive Democratic nominee to the left on climate change, immigration and economic policy. But they struggled to persuade Biden’s team on criminal justice policy beyond what he has already embraced.

The challenges suggest that Biden’s beliefs on policies such as marijuana are strongly held. He supports decriminalization and medical pot, but his aides have said he needs to see more evidence that weed doesn’t endanger people’s health before he backs legalization. Progressives also believe it demonstrates that the Biden campaign is wary of alienating police unions, which oppose changes to qualified immunity, and the larger labor movement of which they are a part.

At the same time, the task force’s criminal justice recommendations suggest that Biden supporters are confident that the Sanders wing will back him in the end despite his refusal to budge, given the alternative.

Liberals are all the more frustrated by their inability to make more gains on criminal justice in the task forces because voters have been moving leftward on the issue. Polls show two-thirds of Americans support legalizing marijuana, and majorities among all racial and ethnic groups say they back the Black Lives Matter movement.

“There will never be a safer time to be bold on these issues and push for change, and Joe Biden is missing the mark,” said a Sanders ally who requested anonymity to speak frankly. “I think people are going to rightly feel as if we didn’t meet the moment. I think a lot of people are going to feel let down. Every progressive, when they read the sentence ‘rein in qualified immunity,’ are going to find it laughable.”

Analilia Mejia, Sanders’ political director who oversaw the task forces, said their overall recommendations are a victory for progressives, and represent an even larger achievement than the left-wing proposals adopted in the Democratic Party’s platform in 2016.

Liberals were especially glad to see the panels embrace transitioning to zero-emission new buildings by 2030, moving to clean electricity in 15 years, and creating “jobs programs like those effectively used during the New Deal.”

“You have the Biden campaign very publicly accepting a list of very progressive recommendations from quote-unquote both sides of the party and kind of making a tacit agreement that, if victorious, he’s going to work to achieve these things,” said Mejia. “Irrespective of not being able to transform Joe Biden into Bernie Sanders, I honestly believe that this would be the framework for a progressive policy agenda across six vital issues. So I do think it’s a win.”

On criminal justice, Sanders appointees pointed to some wins, such as the task force’s goals of financing a “civilian corps of unarmed first responders,” removing a “budget rider blocking [Washington] D.C. from taxing and regulating legal marijuana,” and holding back money from states that use cash bail. Biden has also previously come out in favor of progressive criminal justice policies such as ending cash bail, expunging prior marijuana use convictions and banning chokeholds by police.

“Police spend so much of their time on nonviolent ‘order maintenance’ situations and health crises — circumstances that definitely do not call for someone with a gun,” said Chiraag Bains, co-chair of the criminal justice task force, who was selected by Sanders. “A 24/7 nonpolice responder corps aimed at supporting people, not arresting them, could have saved the lives of Rayshard Brooks, George Floyd and so many others.”

“They really pushed them,” added Sara Nelson, the Flight Attendants Association union leader who was chosen by Sanders to co-chair the economic task force. “Using the federal purse strings to push state and local governments to end cash bail is extraordinary.”

Still, she added, “It was always recognized that [the criminal justice panel] was going to be one of the toughest groups to make improvements.”

Stacey Walker, a Sanders appointee on the criminal justice task force, said, “Obviously, we did not get everything we wanted, but this work represents an encouraging start to the important conversations around much-needed reforms.”

Republicans said the panels’ advice show that Biden is a tool of the far left. Steve Guest, rapid response director for the Republican National Committee, said the recommendations “crib straight from Bernie Sanders’ radical agenda,” including Sanders’ primary proposal of establishing a group of first responders without guns.

The unity task forces focused on six areas — health care, the economy, criminal justice, climate change, education and immigration — and submitted policy recommendations to Biden and the Democratic National Committee. For each panel, Biden tapped five members and Sanders three, who met each week via Zoom and on calls. Their input is not binding.

Some Biden members on the criminal justice task force personally support legalizing marijuana, and even debated putting the policy in their recommendations to the former vice president and the Democratic National Committee, two people familiar with the deliberations said.

Pressed on the decision not to recommend ending the practice in the task force, Gupta said that six weeks ago “very few people were even talking about qualified immunity and recognizing the ways in which it’s been a major impediment to accountability.”

“This isn’t a framework that just seeks to reinstate the status quo that existed at the end of the Obama administration,” Gupta said in an interview Wednesday. “There is an effort to really recognize the importance of moving even beyond what was accomplished given what we know now and where the American public is on so many of these issues.”

She also cited the expansion of the Justice Department’s jurisdiction to prosecute police misconduct as a key step.

Last month, Biden announced that he supports reforming qualified immunity, but a spokesperson declined to provide more details on what that means. Multiple task force members said the proposal’s language leaves flexibility for advocates to push Biden in the future to end the practice, though some progressives worry it is too vague.

“It’s hard to really put your finger on what exactly they mean,” said a Sanders ally familiar with the task force, referring to the recommendation to rein in qualified immunity.

One area of criminal justice reform that applies to immigrants was strongly praised by progressives. The task force proposed reversing the use of Section 287 under the Immigration and Nationality Act, which allows the Homeland Security Department to enter agreements with local police and delegate selected enforcement officers to perform the functions of federal agents.

Sanders appointees view their work as far from over, said Marisa Franco, a member of the immigration task force and co-founder of the Latino mobilization group Mijente.

“I saw it as our job to go in there and push the things to the finish line that were really close,” said Franco, adding that they expect the proposals to “be implemented to the fullest extent.”

Franco added that Sanders members hope to have “open lines of communication” with a Biden administration if he wins. Abdul El-Sayed, a former Michigan gubernatorial candidate tapped by Sanders to serve on the health care task force, said progressives plan to press Biden if he wins.

“They did make [progress] across the board, though it’s not going to be as much movement as I or other progressive leaders would have liked,” said El-Sayed. “My hope here is that we recognize politics isn’t something that we pull out of the cupboard come election time and then put it back in the cupboard for another four years — if we do that, then I worry.”

According to Andrew Morton’s ‘Diana – Her True Story: In her own words’, the Princess of Wales would describe her childhood at her father’s...
Read more