The Masked Singer results: THIS is who Queen Bee, Octopus and Hedgehog are – poll reveals 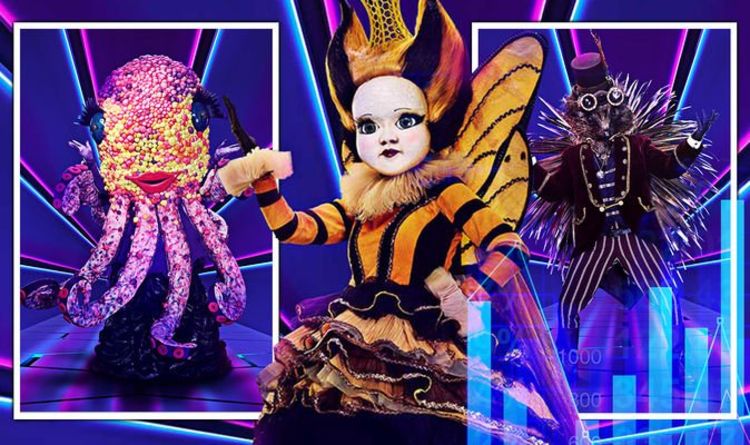 According to the Express.co.uk poll, Queen Bee can only be one person – Nicola Roberts.

Of the 734 people who voted, 348 people believed the Girls Aloud star is behind the stripy mask.

This chimes with the odds, which say the Liverpool lass is 6/5 to be the Queen Bee with Ladbrokes.

And it seems the judges and fans agree. Ever since Queen Bee walked on stage in week one to sing Alive by Sia, fans have been convinced it was Girls Aloud star Nicola.

READ MORE: The Masked Singer UK spoilers: Who has been revealed so far?

Plus her series of clues over the recent weeks send many into a meltdown as they insisted Nicola was behind the mask.

So far, Queen Bee has revealed: she is a wildcard, a lawmaker, the joke of the pack, a rule breaker, no longer a princess now she has grown up, as well as being a celebrity who can do different accents from American to Geordie to Scouse.

EXPRESS VERDICT: Queen Bee is 90 percent Nicola Roberts… Though I wouldn’t be surprised if it was a Saturday or a Little Mix.

Hedgehog has been an enigma from the get go – but who is behind that spiky exterior?

Express readers say they know exactly who it is – Jason Manford.

Ladbrokes agree, with Manford being the new favourite at 6/4 – ahead of Rhydian Roberts at 2/1, Alfie Boe at 4/1 and Michael Ball at 5/1.

Michael Ball took 246 votes, with Alfie Bee in second place with 117 followed by Rhydian Roberts in 109.

So far, the hedgehog has revealed he: is a bit posh, is mostly ‘active at night’, is more introverted than you might expect, is most happy on stage, had a job where they ‘died at 8.30 every night’, had a connection with stage shows such as Phantom of the Opera and Hairspray.

EXPRESS VERDICT: I’m sticking with Manford for Hedgehog… Though Bradley Walsh is a shout…

Katherine Jenkins is the overwhelming Express favourite to be the diva behind the Octopus mask.

She’s also the favourite with the bookies, with a staggering 11/10 with Ladbrokes.

Coming in second place in the Express.co.uk poll was Sheree Murphy, with 119 votes, followed by Ashley Roberts with 111.

Speaking during last week’s episode, Octopus said in a very obvious welsh accent: “I’m so thrilled to be in the semi-final and I honestly didn’t expect to get this far . I tried my best I hope it was enough.”

Other clues are the revelation the contestant has experience on the runway, and Katherine had reportedly worked as a fashion model – being crowned the Face of Wales 2000 – before getting her big break in the music industry.

The Octopus also said she wanted to be a “role model” to younger generations, perhaps this is a reference to Katherine’s own children – Aaliyah and Xander.

EXPRESS VERDICT: Octopus is Charlotte Church, definitely. It’s not Katherine Jenkins, because she doesn’t need to do it.