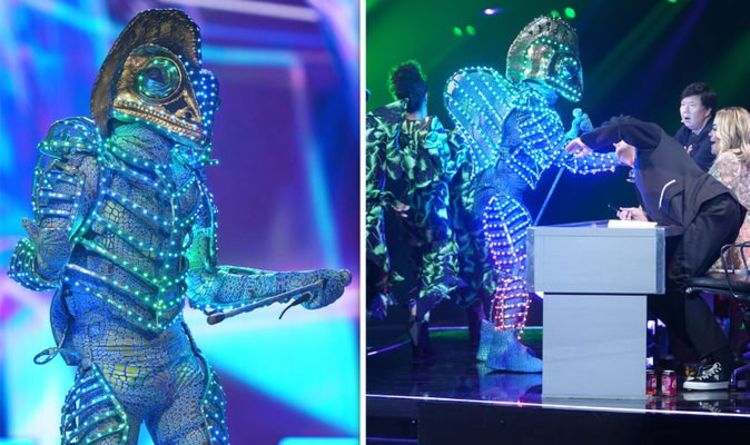 ITV series The Masked singer burst onto the scene on January 4 with perhaps the most bizarre reality TV singing competition ever in the UK. The Masked Singer sees well-known celebrities performing on the show but underneath an elaborated costume which disgusts their identity. A panel of celebrity judges – consisting of Ken Jeong, Jonathan Ross, Rita Ora and Davina McCall – will be trying to guess who each of the stars are.

Who was the celebrity on the Masked Singer? Who is Justin Hawkins?

Chameleon was revealed to be the Justin Hawkins. on The Masked Singer this evening (Saturday, January 11).

Justin, 44, is best known as the lead singer on The Darkness who has the hit singles I Believe in a Thing Called Love and Christmas Time (Don’t Let the Bells End).

Speaking about why he took part, the star said: “I wanted to take part in something that would be slightly surreal, and the secrecy made it very exciting. Like having an extra-musical affair.

“I was reluctant to commit to the recordings because I was supposed to be best man at a wedding in Australia, but it was too good to turn down. Haha!”

The star, who had caught the eye of Rita, admitted he was single to presenter Joel after being unmasked.

On the challenges of taking part, he said: “The toughest part of the process was learning relatively modern songs.

“I’m not fond of new music, so I had to force myself to assimilate inferior compositions… Plus it was difficult to sing from within a helmet!”

The Masked Singer will be running for eight weeks with one star leaving each time.

The other five stars will be performing on the show, which means Tree, Octopus, Daisy, Fox and Monster will be taking to the stage.

Unlike Britain’s Got Talent and The X Factor, The Masked Singer was pre-recorded.

Understandably, ITV has taken the show’s secrecy incredibly seriously with the 500-strong audience sent out of the studio for the big reveal.

Only 30 audience members were allowed to stay for the star to be unmasked.

According to reports, only a small group of producers know the identity of all the celebrities on The Masked Singer.

Even host Joel even admitted he didn’t know who were the stars were until the show wrapped up.

The show has been performing well with the debut episode pulling in 5.5 million people after it went up against BBC’s The Greatest Dancer which only had 3.2 million.