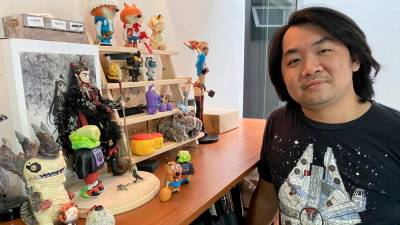 IN AN open corner of his modest home sits a desk where Gan Chuen Guan can draw characters, sculpt figurines and paint them, all while watching videos on the computer. Organised and meticulous, all of his tools are within arm’s reach. So, it is odd that he uses the moniker Messy Desk Studios online.

Gan, better known to his friends as Ah Guan, is an enabler in the Malaysian designer toy and art figure scene. Thanks to his help, fine arts visual artists and illustrators – including several whom we have previously featured in the pages of theSun – were able to turn their 2D art into 3D objects.

By trade, Ah Guan is an illustrator. He did the background scenes of several animated TV series and features, such as Bola Kampung.

Ah Guan added that resin is one of the more affordable and easiest methods to create a figure, but it requires skill, and some easy to find, yet specialised equipment.

One of these pieces of equipment is a pressure pot, a simple contraption connected to a compressor that is used to pressurise liquid such as paint for spraying.

For casting purposes, the pot has been repurposed to remove air bubbles from resin during casting by putting it in a high-pressure environment.

“I studied as a graphics designer, but for some reason, a part of our course included sculpting ceramics. So my friends and I just joined the class anyway, because we needed the credit to pass,” said Guan.

“There was also an animation class at college. As a part of the character creation process for making animation, the character art is sent to sculptors who turn them into 3D objects that in turn could be used as a reference during the rest of the animation process”.

From there Ah Guan tried his hands at making his own figures, first by using materials like paper clay. At the time he was also inspired by stop-motion movies such as Coraline.

“I challenge myself every time I do a piece. My first pieces were fragile and looked rough, but they taught me a lot,” said Ah Guan.

Everything that he learned about sculpting was through trial and error. It took him a few tries before he learned that some materials can be sanded smooth, some paint works better than others, and some techniques yielded better results.

“At first I started with my own original characters and art, then I tried to do sculptures based on other people’s art. I challenge myself every step of the way,” said Ah Guan.

Because of his knowledge, skills, and the equipment that he has, Ah Guan takes on clients, helping them turn their art into figures.

His clients often come to him with expectations and a fixed idea in mind. He sees it as his obligation to advise them on how to turn their ideas into reality. Some designs and ideas can be unrealistic, and nearly impossible to pull off using materials like resin.

Ah Guan gave some common examples, such as a character having tiny spindly limbs, and awkward character poses and dimensions.

Ah Guan has previously produced a few of his own art figures and designer toys for sale. He said that the experience taught him a lot about how the market, people’s perceptions, and the industry have matured.

“You can’t always make it about what you want to make, you have to know what the public wants as well,” said Ah Guan, explaining how cute and rounded figures attract a larger crowd compared to figures with harsh shapes and sharp edges.

Ah Guan is currently making and producing a set of four figures based on the protagonists of Journey To The West. This, he said, is another challenge that he took upon himself.