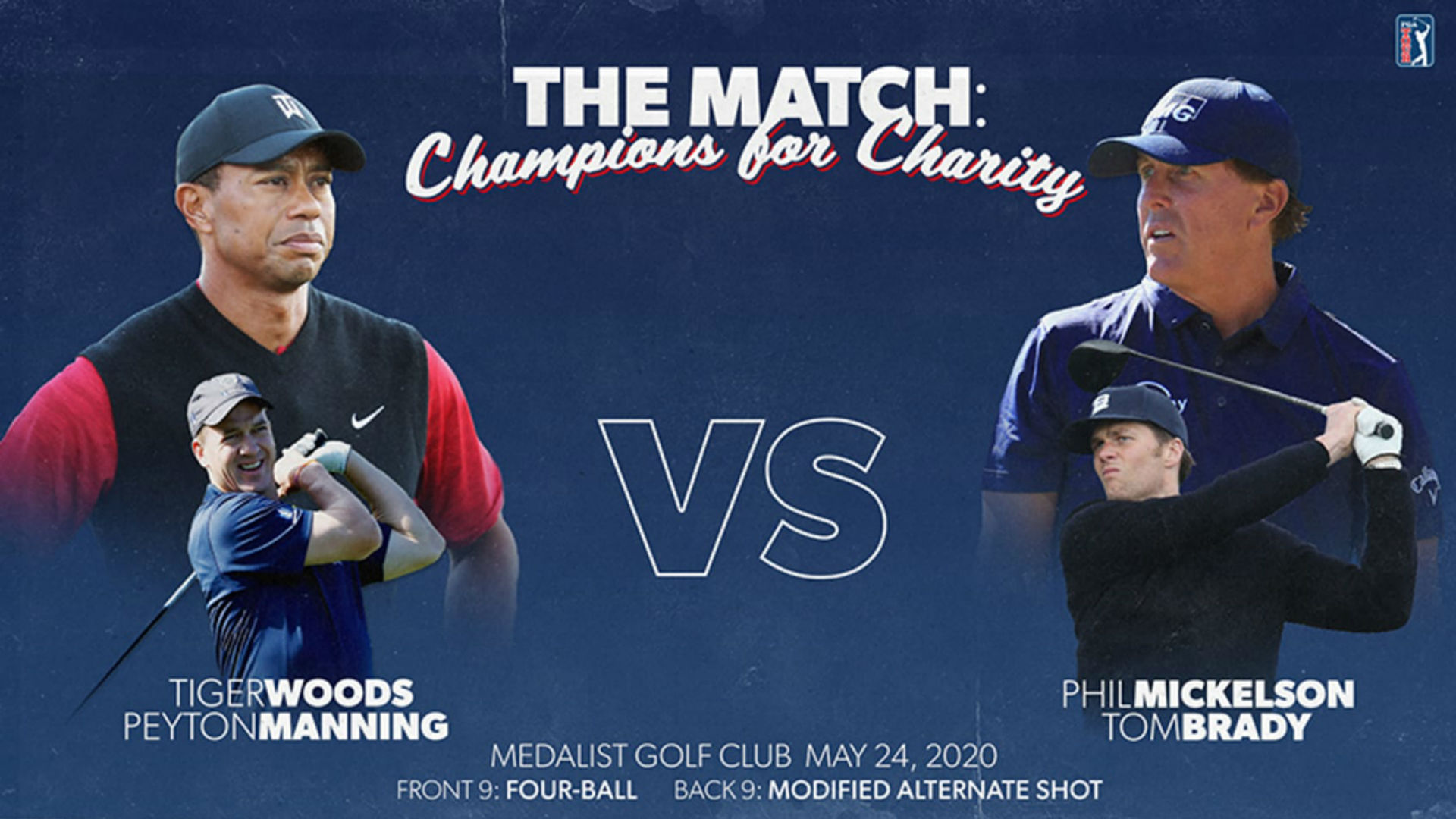 Tiger Woods and Phil Mickelson will play their much-anticipated sequel to the “The Match” nearly two years after the first one. This time, the money on the line isn’t for themselves and they won’t be playing alone.

“Tiger vs. Phil II” has become “The Match: Champions for Charity,” a pro-am special PGA event that has Woods paired with Peyton Manning and Mickelson paired with Tom Brady. The Super Bowl champion QBs will be joining the major champion golfers to raise funds for COVID-19 relief.

When Woods and Manning tee off against Mickelson and Brady on Sunday, the format will be match play with a twist. For the front nine of the 18-hole tournament, scoring will be based on four ball (also known as “best ball) with the lowest individual scorer winning the hole for his team. On the fifth hole, there will be a one-club challenge. For the back nine, the match turns into an modified alternative format, in which both players from each team tee off and alternate shots from the preferred drive.

Last time, when it was only Woods vs. Mickelson in November 2018 at Las Vegas’ Shadow Creek Golf Course, Mickelson pulled off thrilling upset as a +160 underdog by winning on the fourth playoff hole, and with it, $ 9 million. This time, the foursome will be donating a combined $ 10 million to charity.

Here’s a complete betting guide to The Match: Champions for Charity, including odds and a prediction for Tiger Woods-Peyton Manning vs. Phil Mickelson-Tom Brady.

MORE: Is Peyton Manning or Tom Brady a better golfer?

Betting odds for The Match: Champions for Charity

Woods and Manning have been the favorites since “The Match” became official a month ahead of the May 24 event. They started at -200, while Mickelson and Brady were at a familiar +160.

However you slice it, Woods and Manning are expected to beat the heavy underdogs of Mickelson and Brady.

Prop bets for The Match: Champions for Charity

Here are the best prop bets for The Match: Champions for Charity:

First consider Woods has 14-1 odds to win the 2020 Masters, which was pushed back from April to November, while Mickelson is 50-1 for the same major tournament. Second consider that Woods resides in Jupiter Island, Fla, or fewer than six miles away from Medalist, which gives him a strong home-course advantage.

Woods, 44, has one win during the current 2019-20 PGA Tour season, winning the ZOZO Championship in Japan last October. He also finished 9th in the Farmers Insurance Open at San Diego’s Torrey Pines in January.

Mickelson, 49, is no stranger to this position vs. Woods and overcame that in the first edition of “The Match”. His most recent PGA tour victory came in February 2019 at the AT&T Pebble Beach Pro-Am.

Woods is the clear-cut reason his team has the considerable edge for “The Match,” but he also has a pretty good amateur partner.

Manning does get the slight nod as the better golfer, however. He carries an impressive 6.4 handicap, a little lower than Brady’s 8.1.

Manning is older at 44 and has been retired from the league for five years, also giving him a lot more time to golf of late than Brady. For example, Manning did play in this year’s AT&T Pebble Beach Pro-Am, finishing 9th with his partner, Luke Donald, while Brady, 42, ahead of his free-agent move, didn’t participate.

Manning made an eagle at Pebble Beach this year, something Brady also experienced when paired with Ricky Barnes — in the same foursome with his now former coach Bill Belichick — in 2014. But Manning also has experience with Woods that Brady doesn’t have with Mickelson. Manning played well with Woods during the past two pro-ams at The Memorial in 2018 and 2019.

When taking account all notable recently retired and active QBs, Tony Romo, Ben Roethlisbeger, Drew Brees and Matt Ryan are all better golfers than both. Coming down to only Manning vs Brady, one can easily place Peyton first.

Prediction for The Match: Champions for Charity

There’s a temptation to think Mickelson can pull it off again with help from Brady, the new Floridian. They have been confident in dishing it out to their respective rivals with nice shots off the course.

But when you consider Woods and Manning can boast both the better professional and amateur player in this event, plus Woods’ experience of playing at his neighborhood club, the order is tall for Mickelson and Brady. With Woods losing to Mickelson in 2018, there’s no doubt revenge will provide great extra motivation, while Manning could use some kind of win over Brady.