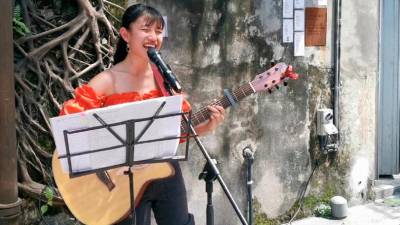 TILLA HANNA started playing the piano at age seven, and bought her very first guitar when she was just 12. She then began singing in front of a live audience, and today, she describes herself as an avid open mic performer.

The now 21-year-old lass somehow always knew that she wanted to do music, though perhaps that could be attributed to her musically-inclined family having an influence on her. It’s in her genes, as they say.

She shares: “I found myself picking up tunes at a young age, and I was actually pretty picky about the music I liked to play when I was young. I told my piano teacher to specifically give me contemporary pieces to learn, instead of classic pieces.”

Tilla walks on an emotionally vulnerable path of songwriting with a sense of heavy-heartedness. She prefers to pen down her feelings and what she thinks needs to be said in a lyrical and poetic manner, rather than expressing them in heart-to-heart conversations.

How would you describe your sound today?

“Well, I would say my sound today is ‘fresh’. When I first started songwriting as a profession, I was so compelled by the idea that Malay pop songs should sound a certain way, which made me sound super old. It took me some time to grasp the idea that the industry is revolutionising, and sounding more trendy and international.

“I used to hate the sound of my voice because it was too distinct. I wanted to sound like those singer-songwriters on Vine so badly, but I learnt that the tone of my voice is capable of doing much more.”

Do you see songwriting as a way to vent your emotions?

“Songwriting for me is relieving. I think I’ve been through quite a bit in terms of family as well as love life, and my only outlet where I can dump those emotions is through song. When I write, it’s almost therapeutic for me to get everything off my chest.

“This is probably going to sound cliche, but I’m not the greatest at sharing my emotions through conversations, somehow I’d beat around the bush but I can be more precise through my music.

“Hence whenever I go through a breakup, I’d write a song stating how I feel, and send it over to the guy, and consider that my closure.”

You’ve written songs for yourself and also for other artistes such as Maya Karin, Kaka Azraff, Natasha Sass and others. How different is it?

“They’re definitely different. There are certain rules of songwriting that should be [followed] when writing for the public in terms of melody, lyrics and structure. There has to be a hook and a general overarching idea, and I’ve learnt that writing for others is definitely a craft.”

Let us into your creative process.

“I notice that I write the most when I’m going through a tough time. That’s when the words in my head construct their own song. When that happens, I get in front of my computer and guitar, play a few chords that harmonise, and just let the natural melody and lyrics flow.

“I record everything on my phone and tweak the lyrics and melody if needed, before I compose with the production software.

“I get inspired through other artistes’ music, honestly. When I hear a sound or lyrics I’m drawn to, I work around that particular element and see what I can come up with.”