The moment Pope Francis took a stand against Venezuelan dictator... 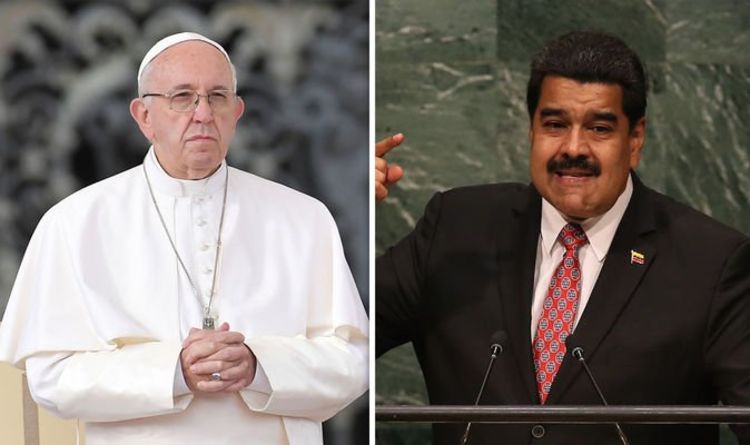 Pope Francis made a damning statement in a message to President Maduro in 2017, calling for democracy and respect for human rights in the country where both are in dire straits. In his August 2017 letter, he asked “all the political actors, and in particular the government, to ensure the full respect of human rights and fundamental freedoms, as well as of current Constitution.” He also claimed that Mr Maduro’s suspension of the Venezuelan legislature – the National Assembly – fostered “a climate of tensions and confrontations.”.

In the midst of the economic crisis in Venezuela, President Maduro suspended the National Assembly, and then formed a new one called the Constituent Assembly.

This was widely seen as an effort to subvert democracy in the country by eliminating opposition party influence, while also trying to rewrite the constitution.

But the Venezuelan dictator has remained defiant, with his government blaming the crisis on US sanctions and claiming it indicates a “coup d’etat led by the United States to topple Maduro and control the country’s oil reserves.”

Pope Francis has waded in on the complex crisis in the country on multiple occasions, challenging President Maduro regularly.

In February 2019, Pope Francis sent a letter addressed to “Most Excellent Mister Nicolas Maduro Moros”, refusing to refer to Mr Maduro as “President” in an apparent show of support for bishops opposing his regime.

One of these bishops in Venezuela had said a month earlier that “Maduro’s claim to start a new presidential mandate on Jan 10 is illegitimate at his roots, and paves the way for the unrecognition of the government, as democratic foundations on justice and right are lacking.”

Another combative message in the letter by Pope Francis was his demand that President Maduro liberate political prisoners, re-establish the National Assembly, open access for humanitarian aid and facilitate free political elections.

The US government has been persistently pressuring Maduro to stand down via tough sanctions and threats of military intervention.