The Moon Is Millions of Years Younger Than We Thought, Scientists Suggest

Looking back through several billion years of history isn’t easy, and new discoveries continually prompt us to rethink just how the Moon came to be. Now, a new study suggests Earth’s satellite is much younger than we tend to think – about 85 million years younger, in fact.

Researchers say that lunar rock samples collected on the Apollo missions aren’t old enough to verify the normally accepted 4.51 billion-year figure for the Moon’s age – but that it can be calculated by looking back to the very first moments of our nearest celestial neighbour.

According to the commonly accepted hypothesis, the Moon was formed from the debris of a collision between Earth and a smaller planet called Theia, spewing out molten rock that eventually solidified into one whole body that began orbiting Earth.

That means the rock that makes up the Moon came from Earth, and can be used to date it, with some sophisticated modelling. The new study suggests the Moon was created when Earth was almost fully formed.

“The results of our latest modelling suggest that the young Earth was hit by a protoplanet some 140 million years after the birth of the Solar System 4.567 billion years ago,” says geophysicist Maxime Maurice from the German Aerospace Centre.

“According to our calculations, this happened 4.425 billion years ago – with an uncertainty of 25 million years – and the Moon was born.”

The models run by Maurice and her colleagues looked at two timescales: how old the Earth was when Theia hit it, and how long the Moon’s massive magma ocean took to cool after it had begun to solidify.

That second process took around 200 million years from start to finish, the scientists’ models show. Simulations based on how the Moon’s silicate minerals may have evolved over time led the researchers to their final Moon age of 4.425 billion years.

The new analysis goes into serious levels of detail and shows just how many factors need to be taken into account – how holes punctured in the lunar surface may have affected the speed at which the Moon cooled down, for example, and how deep the original ocean of magma may have been. 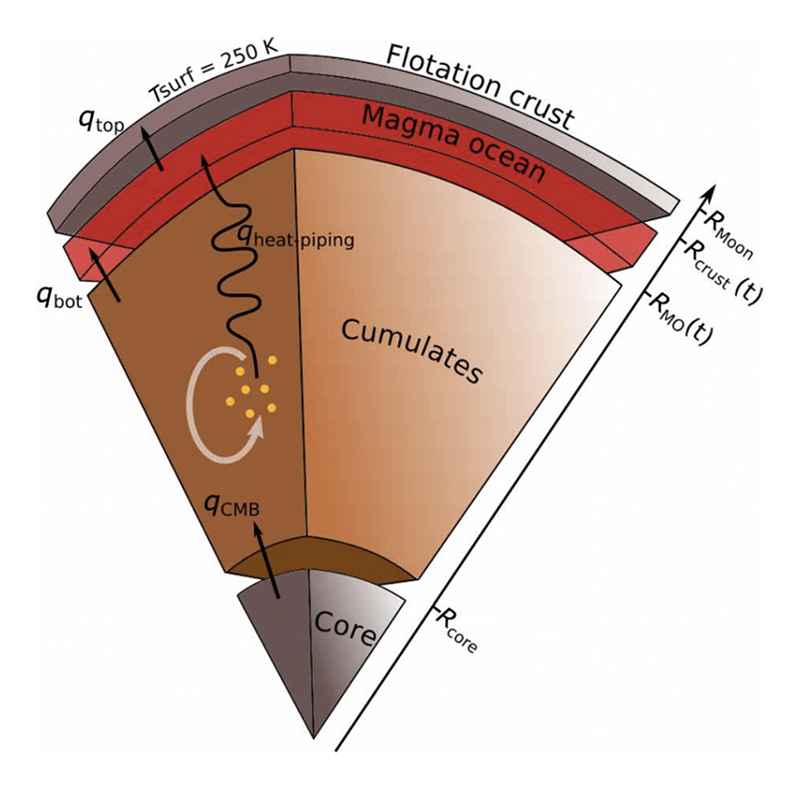 How the early Moon’s interior may have looked. (DLR/Maxime Maurice)

“By comparing the measured composition of the Moon’s rocks with the predicted composition of the magma ocean from our model, we were able to trace the evolution of the ocean back to its starting point, the time at which the Moon was formed,” says geophysicist Sabrina Schwinger from the German Aerospace Centre.

Dating the Moon takes a lot of smart guesswork, and that means we’re probably going to be hearing much more about the age of the Moon in the years ahead. Future crewed missions to the Moon will be able to collect more lunar rock samples, and could hopefully plug some of the remaining gaps in our knowledge.

This isn’t the only recent study exploring these mysterious unknowns. It was only three years ago that the age of the Moon was pushed back some 140 million years, while more recent research suggests the Moon is older still.

These corrections seem huge compared to the time we spend alive, but the adjustments are much smaller in the grand scheme of Solar System history, and we should expect more to come as our understanding evolves.

However, the new estimate matches up rather neatly with the period when it’s thought that Earth’s metallic core formed, late in the geological development of our own planet. It also fits in with the timeline of previous research into damage to asteroids – damage that may have been caused by the Earth-Theia collision.

“The convergence of these independent estimates not only provides a robust and precise age for the Moon-forming impact but also consistently links this event to the differentiation of Earth and the dynamical evolution of the inner Solar System,” the researchers write.