The new coronavirus funding battle over the November election 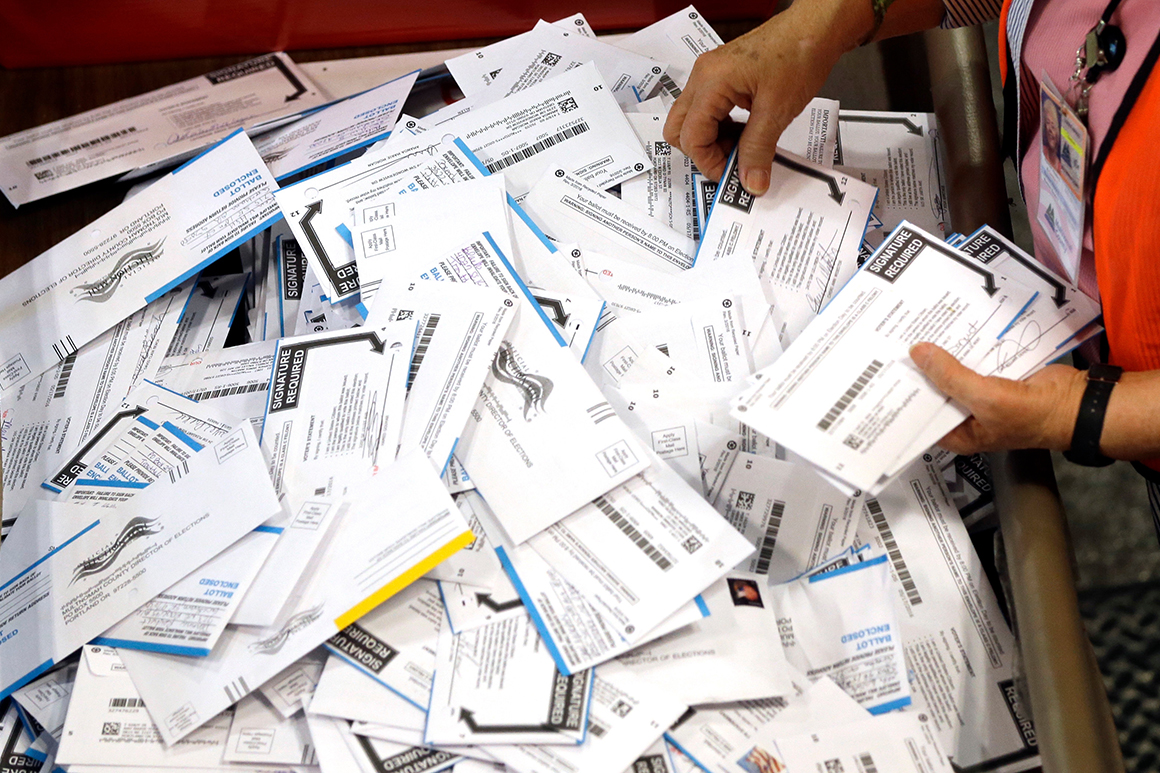 Consensus is growing that Democrats and Republicans will soon hash out a new coronavirus emergency package in the coming weeks. But a major obstacle is emerging: the November election.

Democrats are making a push to expand funding for vote-by-mail efforts in a fourth emergency rescue package, citing the need to help states prepare to hold elections during the coronavirus pandemic. It’s a public health issue, Democrats argue: That elections carried out as usual could spread the virus this fall.

But new vote-by-mail funding is facing stern resistance from Senate Republicans and the Trump administration, who argue against imposing federal guidelines on states. The issue may be a sticking point to any relief package as the U.S. faces mass unemployment and a plummeting economy.

“We are getting more and more bipartisan support from secretaries of states across the country,” said Sen. Amy Klobuchar (D-Minn.) in an interview, who is leading a bill with Sens. Ron Wyden (D-Ore.) and Chris Coons (D-Del.) to expand early voting as well as vote-by-mail.

“In a worst case scenario communities may be facing the choice of either voting by mail or not voting at all,” added Wyden. “We’re already going in this direction and now we’re in the middle of a pandemic and I think this is a very different time.”

But Democrats assert that money is not nearly enough for states to adjust to the risks associated with the pandemic and are pushing for far more. Citing the move by some Republicans to delay primaries amid coronavirus concerns, Klobuchar said that she is “looking at that next package to get the funding included” as well as some additional reforms, like removing state requirements that voters present an excuse to vote absentee.

That’s landing with a thud with the Republicans who control the Senate.

“That’s premature. Around the world we’ve had people in new democracies go to vote when their lives were at risk because the right to vote was so precious,” said Sen. Lamar Alexander (R-Tenn.). “Most Americans would be very skeptical of significant changes in our ability to go cast a ballot in person, certainly at this point.”

And while Colorado has moved to a vote by mail system, even that state’s GOP senator said it’s an issue the federal government should not interfere with.

“States should run state’s elections,” said Sen. Cory Gardner (R-Colo.). “Washington D.C. should not run the state’s elections. So if a state determines that’s the way it wants to go, a state should make that decision.”

Moreover, Senate Republicans say they’ve already allocated money in the last rescue package for elections. But based on estimates from non-profit institutions like the left-leaning Brennan Center for Justice, states will need about $ 2 billion to confront the pandemic, or $ 1.6 billion more than previously allocated.

And with no signs of any reprieve from the coronavirus, some lawmakers see a need to start preparing for the November election now, particularly because the third package did not include any language requiring that states have an election-related pandemic plan.

“I’m very concerned about it,” said Coons in an interview. “We have to begin planning for and [providing] funding for a vote-by-mail alternative if the general election is at-risk because of this pandemic.”

Both Speaker Nancy Pelosi (D-Calif.) and presidential primary frontrunner Joe Biden are making the case for an expansion of mail voting. Pelosi has suggested that as much as $ 4 billion in funding could be needed.

But President Donald Trump and his administration are not on board. During a press conference Friday, Trump said that “a lot of people cheat with mail-in voting” and that when people vote “you go to a booth and you proudly display yourself.” The Trump campaign is also mounting a multi-million dollar legal campaign to block Democrats from changing voting rules.

A senior White House official said the administration already rejected calls for vote-by-mail in the Phase 3 package and that nothing would be different in a fourth relief package. When asked about Klobuchar’s proposal, the official responded: “heck. no.”

“Our Democratic friends want the federal government to take over elections, but historically those have been handled at the state level,” said Sen. John Cornyn (R-Texas.).

If voters “can go to the grocery store they can go to the polls,” he added, noting that Texas has “very generous early voting” and “anybody who wants to vote has an opportunity to vote.”

Senate Rules Committee chairman Roy Blunt (R-Mo.), who works closely with Klobuchar and once served as secretary of state in Missouri, said election officials need “flexibility” and described the funding for elections in Phase 3 as “significant.”

But the issue can blur partisan lines. In a CNN op-ed, Kim Wyman, Washington state’s Republican secretary of state, and Katie Hobbs, Arizona’s Democratic secretary of state, wrote that states will need “billions” to guarantee secure elections. Both secretaries of state called for expanded vote-by-mail and that "all states have the flexibility to mail ballots to every eligible vote."

Five states currently have all mail elections — Colorado, Hawaii, Oregon, Washington and Utah. Sixteen states require that if voters want to vote by mail, they need to provide a reason.

In the wake of the pandemic, several states have already delayed their primaries or encouraged voters cast their ballots by mail. Paul Pate, Iowa’s Republican secretary of state, urged Iowans to vote by mail to combat the spread of the coronavirus, while Georgia Secretary of State Brad Raffensperger also said he will mail absentee ballot request forms to every voter ahead of the state’s May 19 primary, prompting Republican pushback.

According to Pew Research Center, 63 percent of registered voters have said they would be uncomfortable voting in person. Hispanic voters were the most likely to express discomfort.

Among the potential advantages of vote-by-mail, according to the National Conference of State Legislatures, is turnout, which some Republicans, including Trump, believe favor the Democratic Party. Wyden dismissed that, noting that the GOP supported the effort in his home state of Oregon

Zach Montellaro contributed to this report.