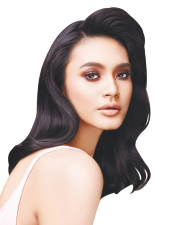 SUCCESSFUL 24-year-old Malaysian model Nia Atasha is taking her first steps into the acting world. She recently completed shooting her first role for the television series Inikan Dikatakan Cinta under the direction of Jurey Latiff Rosli.

The 13-episode TV series will likely be aired at the end of the year.

In the series, Nia plays a wild tomboy who undergoes a personal transformation and becomes a better person. As part of her role, Nia cropped her hair short for scenes set in her character’s past.

Unfortunately, her character’s new boyfriend is unable to accept her past and starts abusing her.

Nia will start shooting her second TV series Peluru Kalis, under the direction of Adilfitri Mohd Yunos, at the end of the year. She will play a cop who goes undercover to nab the bad guys.

To make her role more believable, she event learned to ride a superbike.

“I am slowly adjusting to the world of acting,” says Nia, who was born and raised in Kuala Lumpur.

She says her favourite actress is Cate Blanchett, citing the Oscar-winning actress’ persona both on- and off-screen.

“I want to be the Malaysian version of Cate Blanchett,” she adds.

In terms of Malaysian actresses, Nia is a big fan of Lisa Surihani, whom she has admired since her performance in Lagenda Budak Setan (2010).

Nia is also taking baby steps into the world of business. She plans to produce a line of pyjamas for women before the year ends.

“I have been working on the designs over the past few months,” she says.

She is extremely grateful for all the opportunities that came her way as a result of her modelling career. Interestingly, she never dreamt of becoming a model when she was young.

At school, Nia was a tomboy who was active in various sports, from basketball to taekwondo.

When she was 17, she became more feminine and started keeping her hair long in order to win the heart of a boy she had a crush on.

During this period, she caught the eye of a fashion writer who hired her to model for his magazine.

“My classmates were extremely surprised when I chose to be a model,” she says.

She uploaded pictures from her photoshoot on her social media, and started receiving more modelling assignments.

Ultimately, her relationship with her crush did not last, but her modelling career did.

“I have my ex to thank for my modelling career,” she says, laughing.

Now, she has developed a strong love for modelling. Some of the international models she admires include Canadian model Coco Rocha and British model Kate Moss.

She admits that the modelling world can be extremely judgemental.

“People are always reminding you to lose a few pounds,” she said.

This pressure to look slim caused her to develop an eating disorder.

“I wanted to become thinner,” she says.

“I was depriving myself of food. I was not leading a healthy lifestyle. I was depressed.”

Thankfully, she managed to overcome her eating disorder and gained the confidence to love the way she looks.

“I have friends who are still struggling with their eating disorders,” she says.

“When you are not healthy, it really shows on your face. Real beauty lies in being healthy.”

When she is not working, one can find her doing boxing, yoga and pilates. She also loves to paint and make pottery.

“When my friends get married, I do not have to buy china plates. I can make my own plates for them.”

She says her strength lies in her patience.

“Sometimes a model has to wait for hours on the set for their photoshoot,” she says.

“I occupy my time by sleeping and just drawing.”

Naturally, she is not perfect. Her weakness is that she has trouble saying ‘no’ to her family and friends.

“I will still do favours for my loved ones even if I am dead tired,” she says.