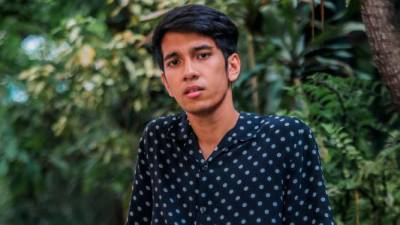 THE higher we are placed, the more humbly we should walk. This saying aptly describes 22-year-old singer-songwriter Naim Daniel, who recently saw success knock at his door.

He was declared the champion of the 34th edition of popular song competition Anugerah Juara Lagu, which took place at Axiata Arena, Bukit Jalil in February this year. He performed his award-winning song Sumpah to a standing ovation.

His win came as a surprise to all, as Naim was the definite dark horse of the competition.

But not everyone was impressed by his success. A veteran TV host and actor aggressively questioned the validity of his victory on social media.

Naim could have easily returned a venomous reply, and an ugly tweet war would have erupted between the two celebrities.

But the young man took the high road. He thanked the veteran celebrity for his advice, and promised to be a better performer.

Everyone was impressed by the young man’s maturity, and his ability to remain calm in the face of harsh criticism.

He pointed out that three years ago when he was a struggling singer, he posted some of his songs on social media, which also earned him plenty of criticism.

“The listeners on social media can be extremely blunt,” he says.

“A few even suggested that I should stop singing altogether. My family had a hard time reading those harsh comments. My mother even cried.”

Honestly, he admits that some comments were hurtful. But once again, he took the high road and refused to engage with his vicious social media critics.

“It costs zero ringgit to be kind,” he says. “I really love the phrase ‘Kill them with kindness’. Besides, I have chosen to be a singer, and as a singer, you are dealing with so many comments, every day. You cannot please everyone. Listening to criticism is a part of your job. You adapt to the situation. You have to suck it up, no matter how hard it gets. That is the life I have signed up for.”

His showmanship at the competition was admired and highly praised. He wore makeup to look like a 2D animated character to perform Sumpah.

Some have said he reminded them of the late legendary singer Sudirman, who always put extra effort in his showmanship.

Sudirman famously wore a costume made from the Malaysian flag, and even performed dressed as Charlie Chaplin.

Naim is extremely grateful for the comparison.

One wonders if his next Anugerah Juara Lagu performance will be just as grand.

“I have always believed that art is to express, not to impress,” he says.

“When you are impressing your audience, it is no longer art. My main aim is to make the audience [feel] connected to my song.”

His steady sense of maturity can be explained by the fact that he started out his career as a child artiste at the age of eight.

Naim, who has acted in more than 100 telefilms, feature films and commercials, says: “I got the chance to hang out with the senior actors on the set while waiting for my scene. I saw how they handled their careers. I learned from them.”

The story of how Naim started his entertainment career is pure serendipity. His parents worked as caterers on film sets, and he would often follow them to work.

At the time, film director Fairuz Loy was searching for a child actor for the telefilm Igauan Semalam, and he decided to hire Naim.

“I am an accidental actor,” he says.

But it is a totally different story when it comes to singing.

He explains: “From young, I dreamed of becoming a singer. I was always singing in front of the mirror with the comb as my mic. I was pretending I was entertaining a huge crowd.”

Naim has even earned a diploma in music. He plans on cutting his first album soon, with nine songs, and expresses a keen interest at starting a restaurant business that serves traditional Malay food.

One can expect these dishes to be fixtures on the menu at any restaurant he opens in the future.

When he is not working, he always spends his time with his family.

“I love staying at home and arguing with my mother,” jokes Naim, who has three other siblings.

“When I am not around, my mother feels bored. She said that she has no one to argue with.”

It can be seen that both mother and son have a charming, warm relationship.

“My mother still ‘suap’ (handfeeds) me,” he says with a huge laugh.