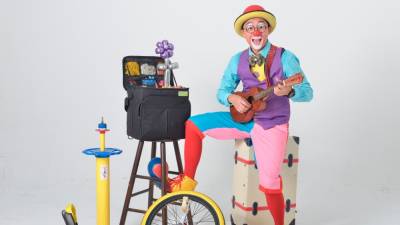 A UNICYCLE is a vehicle that touches the ground with only one wheel. To operate one is not easy. You could easily fall down and suffer a few injuries. You need to master the art of balancing yourself.

Isaac Tan has certainly mastered this art form. In fact, he has also trained himself to juggle whilst riding a unicycle.

Tan, who is married to a kindergarten headmistress, has been a performer for the past 11 years, under the name of Larkie De Clown.

His audience comprises children and adults. He has performed in China, Taiwan, Vietnam and even the Maldives.

In 2015, he participated in the Annual Internship Unicycle Championship held in Malaysia, where he won one gold and one silver.

“When I was young, I did not know what I wanted to do with my life,” says Tan.

“I thought I wanted to be a graphic designer.”

He joined a company where he worked on graphic design, but in less than nine months, he left the job.

“I did not like being a graphic designer,” says Tan, who was born and raised in Kuala Lumpur.\

While searching for another job, he learnt that Resorts World Genting was looking to hire part-time clowns, and he decided to give it a try.

“I love bringing joy to children. So, I decided I wanted to be a children’s entertainer.”

He fully understands that the competition in the clowning business is intense, and that he needs to stand out.

He says: “I cannot just make balloon animals. I need to take up other skills.”

He began to learn skills such as stilt walking, juggling, miming, magic tricks – and even learned how to ride a unicycle.

In the beginning, he would brace himself against a wall when balancing on his unicycle.

He says: “I was afraid I would fall. Later, I learnt that to ride a unicycle efficiently, you must have mental fortitude. If you keep telling your mind that you will not fall, you will not fall.”

It took him just 30 days to master the unicycle. To date, he owns at least 11 unicycles which he bought from Taiwan and China. His biggest unicycle is nearly six feet in diameter.

He explains that in Japan and China, there are universities and colleges that offer training to children’s entertainers, from clowns to unicyclists.

“I would like to see the same thing happening here,” he says. “We have to learn our art from our seniors and YouTube. I really believe these colleges and universities will benefit the new generation of children’s entertainers in Malaysia.”

What advice would he give to those who also want to be unicycle performers like him?

He says: “A lot of people have asked me to help them order unicycles from Taiwan and China. They want to ride the unicycle. But, I never hear back from some of them. I am sure they would have found the whole process of learning to ride a unicycle very difficult, and would have quit.

“They should not do that. They should not quit. You should keep on trying until you master it, even though it may take you up to six months to master. it”

Initially, his father disapproved of his career choice.

Tan says: “I was more busy on weekends. People love having parties and events on weekends. They require my services then. Sometimes I would not be able to go to church on Sundays, and my father was not happy about that.”

The disagreement between father and son got so intense that Tan decided to move out and stay on his own. But over the years, his father was finally able to understand and accept the nature of his son’s career.

Tan admits that the recent pandemic and restrictions have affected his income rather drastically.

To survive during the crisis, he is currently running a laksa business from his home, where he delivers the food to his clients.

“The laksa is from my father’s recipe,” he says.

“My father ran a popular laksa shop in the past. He retired from the business 13 years ago, and is now driving a cab. I decided to bring back his recipe again.”

He hopes the Covid-19 crisis will come to an end soon, so he can go back to doing what he loves best, which is bringing joy and laughter to both children and adults with his unicycle.