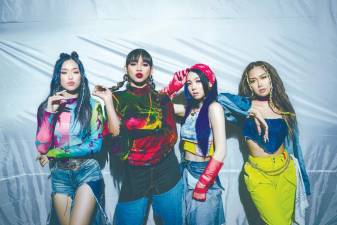 LOCAL girl group Dolla really rocked the Malaysian music scene when it made its debut in March with the single Dolla Make You Wanna.

Made up of Angelina Chai aka Angel, Sabrina Rusli aka Sabronzo, Norsyasya Afiqah Shahrizal aka Syasya, and Tabitha Ariel Lam aka Tabby,

Dolla was signed on to Universal Music after the quartet took part in an audition last year seeking to create a new Malaysian girl band.

These four talented ladies not only sing and dance with the same finesse as other international girl groups, but they have already amassed their own legion of diehard fans, who call themselves iDolla.

This September, Dolla was given the honour of collaborating with female artistes from all over Southeast Asia on the song Heal, which was part of the #StreamToDonate project.

This project, the first of its kind, was a fundraising campaign aimed at spreading love and unity throughout the region as we all faced the Covid-19 pandemic together.

Dolla then launched its second single Impikan, together with the English version of the song which is called Watch Me Glow.

This song is the work of renowned composers and producers from Sweden, Ludwig Lindell, Daniel Caesar and Karl Oscar Gummesson, who have written and produced songs for several K-Pop groups, such as LOONA, Red Velvet, Girls’ Generation and Boys Republic and Pentagon.

“Everything is going great. We are learning as we are going along. We are taking this as a tutorial period. We get to do things at our own pace.

“So far the response has been great. I don’t think we have any regrets,” added Sabronzo.

When asked about being a part of an ensemble of the biggest female artistes in Southeast Asia for Heal, Tabby said: “It was such a big deal for us because it just wasn’t any song. It was a song with a cause. Everyone, all the ladies on it, are so talented. They are so big in their respective countries.

“For us it is just a humbling process. We got to speak to them too, and they were all so lovely. It was a good experience overall.”

Getting the opportunity to record a song (Impikan/Watch Me Glow) written by a team that had also worked with several big K-Pop groups in the past was also exciting.

Tabby said: “When we received the demo and were listening to it, all of us thought it was mind blowing. We could hear the details of how the producer went about creating the song. We were just honoured and humbled by how well we were being treated. So yeah, we are very grateful, very blessed.”

Typically, performances by a pop group like Dolla are meant to be watched ‘live’, but right now the girls are making the most of digital media.

Sabronzo said: “I think it is the new norm now. I think this pandemic will go on for a while, and we will not have a chance to perform ‘live’ anytime soon.”

She also thinks that the ‘safety’ factor might play a big part in keeping people at home, and sticking to social media for their entertainment needs.

Tabby even coined a nickname for their group – the PKP Princesses – based upon the Malay acronym for the movement control order (MCO).

She also does not think the new normal is all that bad.

“If you look at K-Pop, BTS – one of the world’s most famous groups – developed this method to reach out across the world digitally. Maybe this is a good way to reach out to people we normally would not get to reach.”

As proven by the global popularity of K-Pop, language differences are no longer a huge problem when it comes to appreciating this type of music.

Sabronzo said: “I think for Dolla, although we did two versions of our single Impikan, our main market is the local Malaysian market.

“At the same time, we reached out to quite a few international listeners. So we thought, why not do an English version to connect with the international audience as well?”

In fact, the girls got feedback that some of their international listeners actually like Impikan better than the English version.

The ladies of Dolla plan to continue showcasing Malaysian talent, while making a name for themselves not only in Malaysia, but across the world.

Sabronzo said that everything will happen in its own time, but for now the girls will continue to work hard and make great music.

“Talent doesn’t lie. If it is good, it will be recognised,” said Sabronzo.

So far they are busy promoting Impikan and Watch Me Glow. They are also trying to figure out what their next song concept will be. They want to make sure each time they put something out, it will be better than their last release.

They also have exciting new plans for their YouTube channel. “We are planning to map up our content right now,” said Sabronzo.

Syasya who is the quiet one of the group, concluded the interview by saying: “To all iDolla, thank you so much for supporting us and listening to our songs. Please follow us on social media and keep up with our activities. I hope everyone stays safe and take care of your health. We love you!”