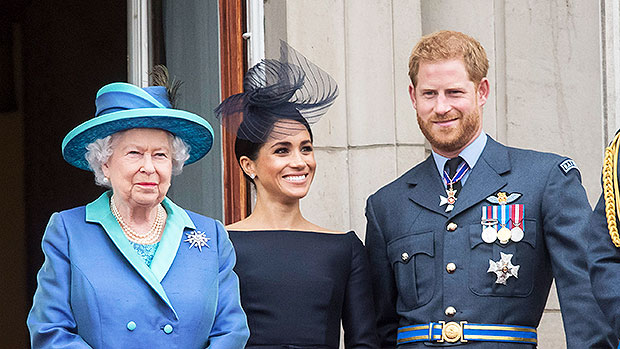 According to royal biographer Robert Lacey, Queen Elizabeth II was sending a message to Prince Harry and Meghan Markle when she left their family photo out of her 2019 Christmas broadcast.

Queen Elizabeth II, 92, always displays family photos on her desk during her annual Christmas broadcast, but in 2019 there were three very obvious omissions from the collection: Prince Harry, 36, Meghan Markle, 39, and their son Archie, 1. Fans freaked out last year when they noticed the obvious shade and now a new book sheds light on the reason behind the “deliberate” snub.

In his new book, Battle Of Brothers: William and Harry – The Inside Story Of A Family In Turmoil, royal biographer Robert Lacey, 76, claims, “the absence of a single Sussex from the 2019 assemblage of significant royal faces reflected a deliberate decision on the part of Queen Elizabeth II. She would be providing no brand endorsement opportunities this year for Sussex Royal.”

Only six months prior, the couple had filed to trademark over 100 products of the Sussex Royal brand, and according to Lacey, they neglected to inform the Queen, who was “hopping mad” when she found out. Ultimately The Duke and Duchess shut down their Sussex Royal brand after they were barred from using “royal” in any of their branding.

In Battle Of Brothers, Lacey — who is the official consultant for Netflix’s The Crown — claims, “Who does and who does not feature on the royal Christmas desk has always been like the changing panorama of faces on the historic balcony of Moscow’s Kremlin. It showed who was in favor and who was not —and at Windsor in December 2019 this even extended to babies.”

The glaring absence of the Sussex family in the Queen’s Christmas photo display was made even more significant because they had just welcomed the monarch’s newest great-grandchild, Archie, earlier that year. Lacey writes: “It was unheard of for the royal Christmas desk not to feature a cozy image of the latest royal grandchild or great grandchild. But in 2019 there was no sight of Archie. A brief video clip flashed on screen during the broadcast showing the queen and Doria cluck-clucking over the little boy, but there was no name check. The queen simply acknowledge the arrival of her great grand child in passing, without mentioning his name or his parents.”

Making the Sussex family “anonymous” wasn’t the only “message” the Royal family sent to Harry and Meghan in the weeks before they announced they were stepping down as senior working members of the British Royal Family. In Battle Of Brothers Lacey claims that Prince William, 38, hoped that the the four-generational photo of himself, with the Queen, Prince Charles, 71, and Prince George, 7, that was taken in December 2019, was a reminder to Harry about his place in the line of succession.

“According to insiders this formal photograph taken in the Buckingham Palace throne room a week before Christmas 2019 was the idea of Prince Charles, anxious to promote his cause of the ‘slimmed down Monarchy’. Palace sources have also let it be known that the plan of depicting the direct line of royal succession was enthusiastically supported by prince William, who was not saying anything for the record — but who wanted to send his younger brother a message.”

The message was received and it was taken to heart, writes Lacey. “‘For Harry and Meghan,’ wrote [Finding Freedom] Sussex scribes [Omid] Scobie and [Caroline] Durand, the Queen’s Christmas choice of pictures had been ‘yet another sign that they needed to consider their own path.’”

Prince Harry and Meghan have forged their own path since then and now live in a $ 14.7 million mansion in Montecito, CA. They are producing projects for Netflix and working on social causes close to their hearts.

Battle Of Brothers: William and Harry – The Inside Story Of A Family In Turmoil, by Robert Lacey, is in bookstores now.