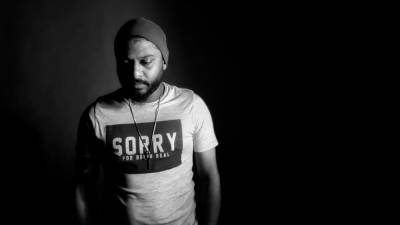 RAPPER and recording artiste Samson Thomas grew up in the now demolished Pekeliling Flats that were once located in Jalan Tun Razak, and later spent most of his life in Sentul. Coming from hardship, Samson would (almost naturally) move towards music, working and collaborating with other artistes as his career progressed.

“I started my career as a rapper in Psychomantra’s maiden album Oru Kirukkanin Kaaviyam. I got my big break when I was featured on a collaborative track composed by Saran Z called Ennavaley together with Psychomantra, Dhilip Varman and Thila Laxman,” said Samson, who uses the stage name Saint TFC.

“Until today I have up to 36 songs playing on local and international radio stations. I was also the first Malaysian rapper to be featured on the soundtrack of the Indian Malayalam-language movie Ranam starring top actors like Prithiviraj and Rahman.”

theSun spoke to Samson about his latest music project, which has caused quite a stir.

He explained: “It all started during the Black Lives Matter movement protesting the unjust murder of George Floyd. I was with my wife, and we were reflecting upon racism, and how it has impacted the world.

“I started asking myself how many times I have experienced it and how it has changed or moulded me.

This led to Samson writing the track I’ll Never Forget, with lyrics highlighting the problems faced by ethnic Indians in Malaysia, and using Samson’s own experiences. He released the music video for the song in July.

“Before writing I’ll Never Forget, I had to understand how sensitive the issue was, and I had to wrap my head around exactly what I wanted to convey through that song. I had to take a walk down memory lane and relive all the moments I was racially discriminated. Trust me, it was not a good walk. As soon as I had the inspiration from my own life experience to write the song, I had to figure out its direction.”

As Samson did not want to just record himself accusing others of being racist on the track, he opted for the pacifist route by sharing his story instead.

“I wanted to pen down the times in my life where I felt less of a Malaysian and more like an outcast, although at home I was raised believing differently,” he bluntly explained.

Beyond its pointed lyricism, the song was sung or rapped in three languages; Malay, Tamil and English.

Each language was employed for specific reasons, such as the Malay verse being Samson’s way of breaking the language barrier and to reach out, Tamil for highlighting the casteism within the Indian community, and English to bring all the verses together.

Three months after releasing the song, Samson claimed that his intention of wanting to have people share their own stories has worked.

“A lot of people came out and shared their story, and I was glad that they found the courage to do so. From fellow Malaysians that are still here, to those who migrated because they couldn’t stand the discrimination.”

However, he was still unsure of the track’s long term effects, and added: “I believe I sparked something and I hope it only churns out positive outcomes. The ball is still rolling, so I can’t tell.”

Samson added that despite being happy over how many people the song has reached, he was also confronted by some of the pitfalls of of being a celebrity promoting a social issue.

He said: “Some people started opening up to me and started telling their stories, and a few others said I did the song just for [attention], and that I just wanted to be famous. I am someone who respects other people’s opinions, hence I didn’t respond to any of those remarks.

“I was taken aback by the stories that were shared with me. Some [people] were very young and I also had stories from 60-year-olds. I also received a lot positive comments on the YouTube video from people of other races. A lot of Malaysian Indians reached out to me and thanked me for song, and the steps that I took to raise this issue.”

Samson is currently working on other songs for his future releases through his Audiofreaks studio.