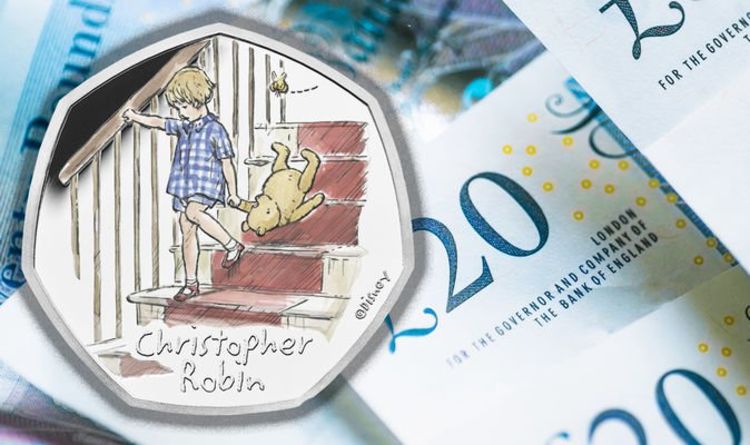 Christopher was the son of A.A. Milne and the inspiration behind the characters in his father’s book series, Winnie the Pooh.

As well as being a much-loved children’s book series, many will know Winnie the Pooh from its film depictions by Disney.

The Royal Mint has celebrated the occasion with the release of the second coin in the Winnie the Pooh series.

It will depict the character of Christopher Robin from the Disney movies.

The coin will show illustrations of Christopher walking down the stairs with a teddy bear in hand.

The 50 pence piece, which will be available in colour, is in the same watercolour style as previous coins in the series.

It will join illustrations in the series that feature the characters Winnie the Pooh and Piglet.

Fans will be able to get their hands on the coin from 9am today, October 22.

It will be available to buy as a brilliant uncirculated coin for £10 or in the colour version for £20.

Coins enthusiasts will also be able to pick up the silver proof version for £67.50 and the gold proof edition will go on sale for £1,125.

Royal Mint’s product designer Daniel Thorne stated: “Taking an original illustration from a full page of a storybook and condensing it down to the perimeter of a 50p, yet not taking away the essence of the story is a difficult feat but working with the original illustrations has been an amazing opportunity to bring those stories to life in a brand new way.

“The popularity of our childhood character coins is no surprise.

“They allow us a great opportunity to introduce a sense of nostalgia coupled with a splash of colour to make these coins real collector’s items.”

Divisional director for commemorative coin and The Royal Mint Experience Clare MacLennan added: “As a business, we have seen the success of our childhood character coins grow year on year and with endearing and appealing themes including The Gruffalo, Peter Rabbit and now Winnie the Pooh and Friends, that’s no surprise.

“One hundred years after the birth of Christopher Robin, AA Milne’s son and inspiration for the character, we are delighted to capture this on our latest coin.

“We’ve received overwhelmingly positive feedback to the design of our initial Winnie the Pooh coin and as we launch our Christopher Robin coin, the second coin in our new collection, we look forward to even more people taking up coin collecting as a hobby.”