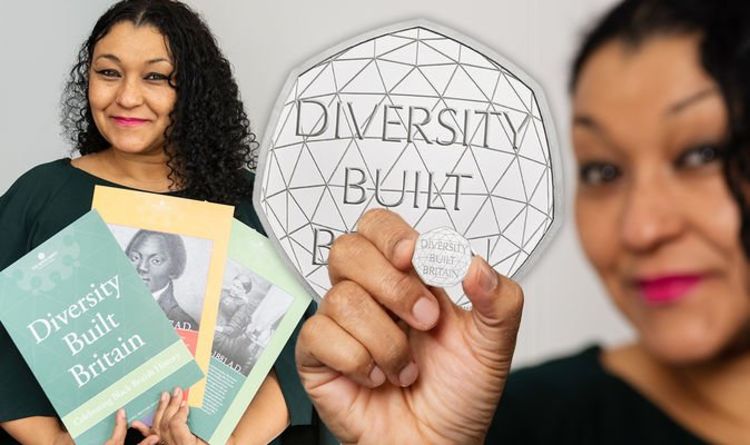 To mark the release of the new coin, The Royal Mint has also produced a new 50p coin collection.

They will be available in Brilliant Uncirculated, Silver proof and Gold proof editions.

Dominique Evans, Designer at The Royal Mint, said: “When designing this coin, I began by thinking about the people who inspire me and what diversity has meant in my life.

“I believe that no matter where you are born, we all belong under the same sky and this was the starting point of the design.

Anne Jessopp, CEO of The Royal Mint, said: “Britain’s history is rich and diverse. For more than 1,100 years, the nation’s story has been told through coins struck by The Royal Mint, a narrative carried in the pockets and purses of all its people.

“The contribution of ethnic minority communities has been such an important part of that story but has often gone unrecognised. This coin has been created to celebrate all the people who have made Britain what it is today.

“This is a very exciting development for us and the launch of this important coin coincides with Black History Month, signalling a change in UK coinage, one that I am personally delighted to pioneer.”

On the new release of the coin, the Prime Minister, Boris Johnson said: “Congratulations to Dominique Evans the designer of The Royal Mint’s new 50 pence coin – ‘Diversity Built Britain’. Her design is the first in a series of coins The Mint will be producing, celebrating those who have helped shape our national history and culture.

“I had the great pleasure of welcoming Dominque to a Cabinet meeting, along with Anne Jessopp, the first female Deputy Master of the Mint and Blondel Cluff CEO of the West India Committee and Advisor to The Royal Mint. This new coin echoes the government’s commitment to building a fairer society for all.”

This month, The Royal Mint released their first henna-inspired collection in celebration with Diwali.