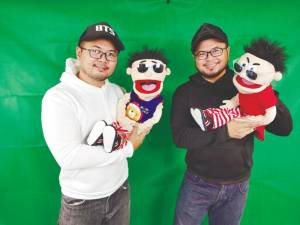 Mohd Syazrul and Mohd Syazwan Nizam Mastusin are twins who have a special talent for making puppets talk and sing their hearts out. Based in Beaufort, Sabah, they have been full-time ventriloquists for the past 11 years.

“We started doing ventriloquism professionally from the age of 20,” says 31-year-old Syazwan.

Their interest in ventriloquism began at age 15, when they caught a television show where renowned British comedian and ventriloquist Paul Zerdin was performing with his many puppets.

“We were so curious to know how he managed to speak through his puppets without moving his lips,” says Syazrul.

“We are self-taught ventriloquists,” says Syazwan.

They have performed all over Malaysia, including at the royal palace in 2014. They believe what sets them apart from other ventriloquists is the fact that they are possibly the only twins in Malaysia practising this art form.

Their shows are usually broken into two segments. In the first segment, they imitate the voices of famous singers such as Jamal Abdillah, P. Ramlee, Ramli Sarip, Zamani and many others, through their puppets.

“Once we had a chance to perform in front of the rock singer Awie, for a television show,” says Syazrul.

“He was amazed that we could imitate his voice and the voices of his other singing buddies.”

The second segment of their show is where they crack jokes. When they perform for adults, they make fun of everything under the sun, including politicians.

They have set up their own YouTube channel and Facebook page to highlight some of their acts. Their long-term goal is to expand their horizons and gain an international audience.

“We want to imitate the voices of some American singers and sing their famous numbers with our puppets,” says Syazwan.

In the past, they declined several invitations to appear on the reality show Asia’s Got Talent.

“We need to come up with a repertoire that will appeal to an international audience first before entering any international TV reality show,” Syazrul explains.

They admit that these days, more youngsters prefer to be a clown or a magician compared to a ventriloquist.

“Speaking without moving the lips is not an easy art to master,” Syazwan says.

“At the same time, a ventriloquist also needs to have a wicked sense of humour to create a joyous atmosphere. Not everyone can be funny.”

To date they have 11 puppets. All of their puppets were bought from America, with prices ranging from RM300 to RM4,000. They say their favourite puppets among their collection are Buntak and Buntik.

“We have an extra close connection to them.”

One of their future plans is to custom make puppets that resemble late singers such as P. Ramlee and S. M. Salim, which they hope to use during performances.

“I am sure the act will be an instant hit among audiences,” says Syazwan.

The twins admit that they sometimes do not see eye-to-eye where their repertoire is concerned.

“We will have fierce arguments, till one of us gives in,” says Syazrul.

But the twins are adamant that they never take their arguments to heart.

“Differences in opinion are normal between two people,” says Syazrul.

They cite the first known ventriloquist in Malaysia, the late Sheikh Mahadi Ahmad Baladram, better known as Pakcik Jalud, as their main inspiration. Their other inspiration is well-known American ventriloquist Terry Fator.

“He also sings with his puppet, just like us,” Syazwan says.

One of their biggest career achievements is winning the grand prize on the television talent show Mimpi Ke Bintang Anjuran RTM in 2012.

They won a RM5,000 cash prize, along with a trophy. The twins and their puppets sang P. Ramlee’s Getaran Jiwa, followed by Sudirman’s Milik Siapa Gadis Ini and Search’s Isabella.

It was their late father, who worked as a technician in Radio Television Malaysia (RTM), who influenced them to go into the entertainment industry.

“Our father used to be a part-time theatre performer and a magician,” says Syazwan.

Watching their father perform helped to instil a love for the arts in their souls.

“We wanted to be showmen, just like our father,” says Syazwan.