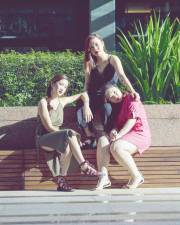 THOUGH hard to believe, the band Jiwang is made up entirely of three sisters, with the two oldest being full-time musicians, while the youngest is also involved in the theatre scene.

“Jiwang consists of Jo, the eldest, Jermaine, the middle child and myself,” said Jovian, the youngest of the trio.

“We started our group two years back, after Jo came back from her studies in the United States. We thought of what we could do together in music, even though we’re all in different fields, and we decided to create this group together as a tribute to our mum.

‘Mama Jiwang’ has been our main supporter and investor in our music education and careers since we were little, and this is our token of appreciation for her.”

Jermaine explained to theSun that the band’s early endeavours involved nostalgic covers in three languages – English, Mandarin and Malay – including Disney tributes, and tracks by Wang Leehom, Faizal Tahir and Matt Corby, among others.

“Our sound is definitely pop, with an indie/acoustic/’Jiwang’-twist. For now. We might change it up in the near future!” explained Jermaine.

“We believe in original, Malaysian music. Our first show was at Sofar Sounds Singapore in 2018, and we wrote three originals for that showcase. So we’re definitely looking forward to performing and writing more originals,” Jo pointed out.

The lead singer of Jiwang, and an established artiste in her own right, Jo elaborated that they are currently in the midst of writing more original compositions, and planning a few showcases for 2021.

“We’re also planning to shoot a music documentary that involves us travelling to different Orang Asli villages and sampling their music instruments for our original songs. It will be a beautiful mix of different cultures, highlighting the amount of talent and richness that we have here in Malaysia, and also a learning experience for all of us”.

Though the country has begun to recoup its losses by opening up certain sectors following the recent Movement Control Order which stemmed from the Covid-19 pandemic, the live music scene is still struggling, while musicians at every level, particularly those of the indie variant, remain affected.

It is no different for the ladies of Jiwang.

“Financially? (We’ve been affected) pretty hard. We perform as well as teach music, all three of us, so the pandemic really did hit us hard monetarily. But it also gave us more quality time together at home, since we started online live performances,” said Jovian.

“Although performing online lacks the interaction with the audience and the energy we get from people, we managed to get through it together and still create more original music for our listeners. In a way, the pandemic did boost our creativity.”