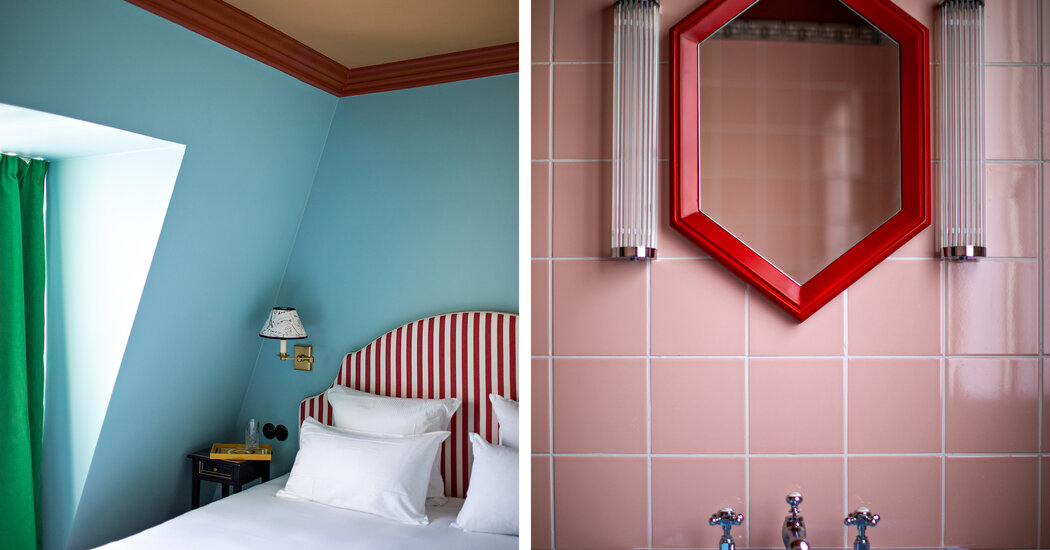 Welcome to the T List, a newsletter from the editors of T Magazine. Each week, we’re sharing things we’re eating, wearing, listening to or coveting now. Sign up here to find us in your inbox every Wednesday. You can always reach us at tlist@nytimes.com.

The new Hotel Les Deux Gares in Paris’s 10th Arrondissement is a riotous collision of French and British style. The 40-room property, set in a 19th-century Haussmann building between Gare du Nord and Gare de l’Est, is the fourth offering from the Touriste hospitality group — and by far the boldest. The bedrooms are breezy and colorful: There are striped headboards with mismatched curtains; the walls are painted in olive greens and pale pinks with contrasting ceilings and trims; the bathrooms feature bright primary-toned tiles. “I love the fantasy of hotels,” says the English artist Luke Edward Hall, whom Touriste’s founder, Adrien Gloaguen, enlisted to design the interiors. “In the back of my head, the space was the home of a bohemian Paris collector that’s been opened up to guests.” Finding inspiration in Wes Anderson’s 2014 film, “The Grand Budapest Hotel,” he dialed up the theater, fearlessly playing with both prints (leopard and toile) and periods. In the hotel’s Art Deco-inspired corners, antique French Empire tables are topped with lights and lampshades displaying Hall’s sketches. His eclectic vision of French hospitality continues across the street at Café Les Deux Gares, a traditional bistro that includes a cherry-red bar and a trompe l’oeil tortoiseshell ceiling by the artist Pauline Leyravaud. Rooms start at $ 152 per night, 2, rue des Deux Gares, Paris, France, hoteldeuxgares.com.

The Healing Properties of Moringa Powder

Growing up on the Kekaha Sugar plantation on Kauai, Hawaii, Misa Maruyama Jones always enjoyed tasting the moringa leaves in her cup of tinola, a soothing chicken-and-green-papaya soup that her Filipino neighbors would make. “Eating neighbors’ home cooking at weekend parties was a part of life,” she says, noting how the delicate leaves were usually harvested from a backyard tree. The moringa tree — also known as malangguy — is native to South Asia but arrived in Hawaii thanks to Filipino immigrants who went to work the sugarcane and pineapple fields throughout the first half of the 20th century. Despite its longstanding reputation in Hawaii for possessing healing benefits, though, moringa has only recently become the object of a health-food craze on the mainland. Now, its leaves are crushed into powder and taken as supplements. These products, says Maruyama Jones, were initially unrecognizable to many locals as the same plant. However, some chefs have embraced the powdered form, sprinkling it over scallop crudo, miso ramen or furikake salmon. And Maruyama Jones believes that moringa seeds and capsules helped save her father’s life when he was battling cancer four years ago. This inspired her and her husband, Geoff, to start their own moringa farm in 2016 on the Big Island, in Kailua-Kona — Maruyama Jones Farm, where products including moringa-seed oil and moringa-leaf matcha tea are sold. From $ 15, maruyamajonesfarm.com.

The most disturbing part of Julia Phillips’s work is what she leaves out. The German sculptor, who divides her time between Chicago and Berlin, molds ceramics into devices that conform to the curves of the human body. Though mounted so as to suggest interaction, these are not inviting objects. “New Album,” an exhibition of Phillips’s work now on view at Matthew Marks, features, for example, what appears to be a pair of black binoculars, angled downward and mounted on a stainless-steel stand. Its ends are glazed in a blotchy salami pink, the rims of the eye holes left ruptured and bumpy. At the back of the gallery, two clay plates, each shaped to cover the back of someone’s head, ears, neck and shoulders, stand on poles. One is angled as if to push the head forward, forcing the unseen wearer to look to the floor; the other would crank the head back, exposing the tender dip of the throat. Phillips’s use of negative space implies a subtle sort of violence. “I’m not interested in designing torturous elements or actual functional elements,” the artist said in Berlin in 2018. “I’m interested in making sculptures that are kind of a mind game.” Inspired by Black feminist thought and the power relations embedded in colonialism, Phillips hopes viewers will “finish” these empty devices with their imagination — and ask themselves whether they would be the doer, or the done-to. “New Album” is on view at Matthew Marks through Oct. 17, 2020, at 523 West 24th Street, New York City. Reservations are recommended, matthewmarks.com.

Out this week is the highly anticipated JW Anderson collection from Moncler’s Genius, an ongoing collaborative series between the Italian-based brand and various designers, such as Simone Rocha, Richard Quinn and Matthew M. Williams of 1017 ALYX 9SM. “I’m from Northern Ireland,” Anderson explained of his interest in Moncler over Zoom, “so I’m very used to the cold.” Many of the collection’s 31 looks (around 180 pieces in total) were references to Anderson’s own prolific archive as a designer for his namesake brand (he is also the creative director of Loewe) — details such as floppy, wide-brimmed hats and oversize chains for the handle of a bag might look a little familiar — but all are rendered in Moncler’s signature nylon material to keep out the frost. “I’ve always loved puffers,” he added. “I love the shape they create. I’ve always wanted to play with it in my own collections. There’s nothing better than volume. It boosts the theatrics, and you can build character out of it and create a kind of abstraction.” Not one to shy away from bold colors, Anderson chose to work with canary yellow, silky pink, red and a bright sky blue for many of the items. A long vest printed with mallards and other pond fauna, with matching boots and bag, also stands out. Anderson acknowledged it was his way of exploring nostalgia: “I was thinking of summer camp, and a kid’s sleeping bag.” Both playful and dramatic, Anderson’s cerebral collection promises to not just keep you warm but make you think. moncler.com.

“In perfume, when you work for the home, you want reassurance, comfort, cleanliness and luxury,” said the fragrance impresario Frédéric Malle as we commiserated over our mutual fidgetiness with life under quarantine. Malle’s recently resurrected room spray Perfume Gun, a hefty objet of smooth ceramic — cheekily made to emulate a bottle of Windex — is just the indulgence now that many of us are spending our working hours at home. It comes in two scents, both taken from Malle’s popular line of candles: Cafe Society and Jurassic Flower. The former is an earthy tribute to the 1950s Paris of Malle’s childhood, reconstructed from his fond memories of evenings at his parent’s Rive Gauche apartment, the air tinged with a Guerlain home fragrance that is no longer manufactured. The latter is extracted from the white flowers of the magnolia tree, offering a summery citrus scent graced by notes of peach and apricot. Before the pandemic, I would spray Malle’s perfumes on myself as a form of armor before stepping out into the world. Now, spritzing my living room with Cafe Society each morning is a private ritual, like invoking an invisible talisman that promises to ward off the restlessness of this seemingly endless stretch of indoor confinement. $ 195, fredericmalle.com.