The Trump MAGA-verse consumes the RNC 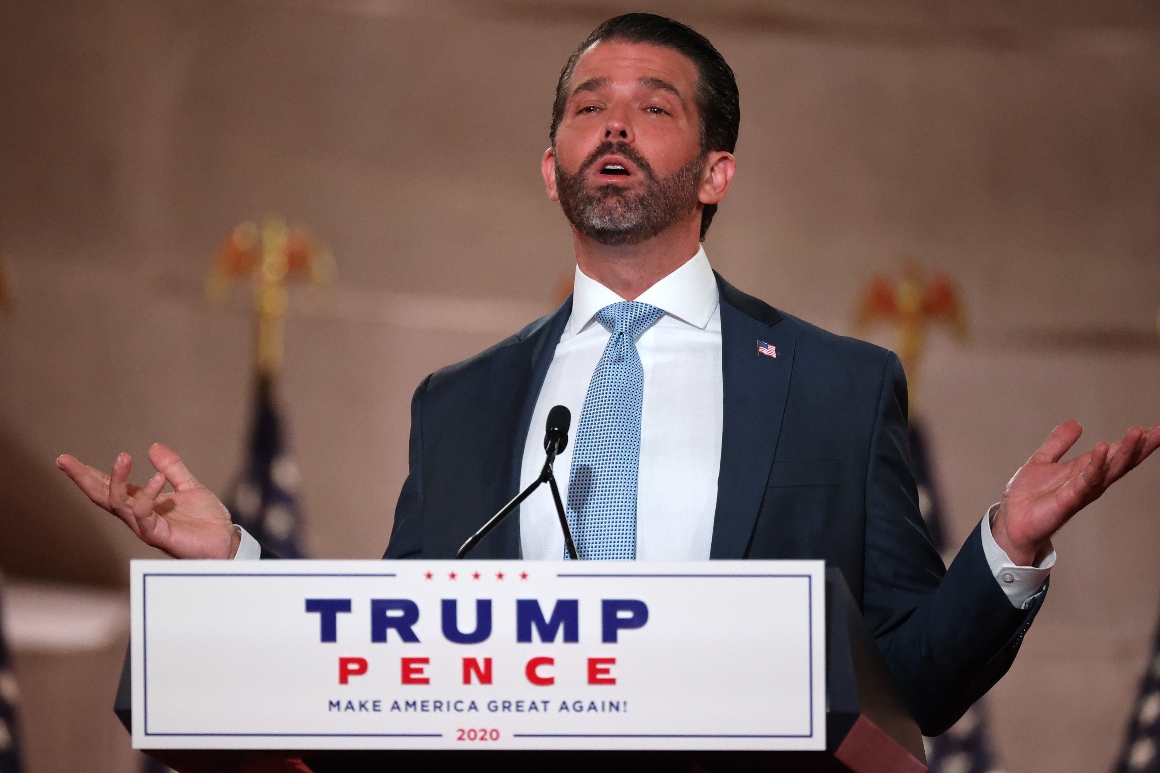 It was a theme that echoed throughout the night. Several people directly addressed “Mr. President” as they talked. One sign on the speaker podium had “Trump 2020” in large red letters above a much smaller “The GOP Convention” — another was just a Trump campaign sign.

“Trump is the bodyguard of western civilization,” proclaimed Charlie Kirk, the 26-year-old who built a nationwide conservative student organization, Turning Point USA, on the power of pro-Trump social media savvy.

It was a defining moment for a party that had once expressed wariness of Trump’s heretical approach to Republican politics — trashing free trade and globalization, running up the deficit, pledging to pull troops out of any overseas location and arguing for immigration restrictions that went too far for many conservatives.

Now, Trump’s grievances are the party’s grievances. MAGA memes are the party’s official image. And Trump’s family members are the Republican stars — at least one Trump will speak every night this week. On Monday, Trump Jr. and his girlfriend, Kimberly Guilfoyle, gave the evening’s two most fiery speeches. The message: Trump is protecting all that was good — and the Democrats are on the verge of plunging America into darkness.

“You’re not allowed to go to church, but mass chaos in the streets gets a pass,” Trump Jr. said, standing at the dais in the Andrew W. Mellon Auditorium, the ad hoc venue for the Republican convention speeches. “It’s almost like this election is shaping up to be church, work and school versus rioting, looting and vandalism. Or, in the words of Biden and the Democrats, ‘peaceful protesting.’”

The tactic is a gamble that fanning the flames of Trump’s culture wars is the best way to turn out Republican voters in November.

“The Trump folks seem to have leaned more on a base activation strategy than a ‘converting undecided voters’ strategy,” said Seth Masket, a political science professor at the University of Denver. “And they’re trying to get Republicans who are already Republican fired up about their ticket and make sure that they’re still enthusiastic and that they’re going to show up in November.”

Leading the charge Monday night was Trump Jr., who has proven the most natural at traversing the space between the Oval Office and the Gen-X-to-Zoomer internet culture that reinforces the president’s messaging to his base.

Trump Jr. has won the loyalty of MAGA internet influencers as an adept internet troll himself, with specialties in outraging liberals and mainstream journalists, depending on the social media trends of the day. And though he walked a finer line than usual — saying at one point that the death of George Floyd was a disgrace, for instance — he remained focused on making the election a referendum on “cancel culture”.

“If they get their way, it will no longer be the silent majority. It will be the silenced majority,” Trump Jr. warned. “This has to stop. Freedom of expression used to be a liberal value, at least before the radical left took over.”

The ability to shift between clash-of-civilizations rhetoric on television and MAGA internet-ese on social media has helped Trump Jr. maintain his status as a high-powered fundraiser for his father and the Republican Party. Meanwhile, his frequent hunting sojourns has also given him a connection to rural Trump supporters.

Trump Jr. implored his father’s supporters to believe the president can deliver everything they want — “the life you want to have,” “a perfect family,” “a world where the evils of communism and radical Islamic terrorism are not given a chance to spread.”

“You can have it,” he said four times in his closing passage.

Yet to this point, team Trump’s anger-and-fear messaging hasn’t helped the president’s standing in the polls. He trails Joe Biden, his Democratic rival, by significant margins in nationwide polls, as well as in polls across key swing states.

But a recent Brookings analysis found that millions of white, working-class Americans without four-year college degrees — a demographic that trump has a 60 percent hold on, according to a recent Wall Street Journal/NBC News poll — accounted for the vast majority of nonvoters in 2016. That finding is particularly strong in swing states Pennsylvania, Wisconsin and Michigan, where roughly 62 to 67 percent of nonvoters who sat out 2016 were white voters without college degrees.

“Trump’s entire convention, just like his entire presidency, is targeted toward that very specific group of voters,” said Dan Schnur, the national communications director for John McCain’s 2000 presidential campaign, and now a political independent who teaches communications at the University of Southern California. “The more excited they are, and the greater numbers in which they turn out, the better his chances for reelection become.”

The pandemic-upended convention was mainly split between two locations in Washington, D.C. — the Mellon auditorium, a venue close to Trump’s D.C. hotel, and the White House itself, where Trump gathered groups of Americans to speak about his accomplishments. Between segments, the convention offered sweeping shots of D.C. monuments — a reminder that Trump has taken over Washington, as well.

And for every speaker with a compelling life story — former pro football player Herschel Walker using personal anecdotes to defend Trump from accusations of racism, or Maximo Alvarez, the Florida businessman who drew from his background as a Cuban refugee to denounce socialism — there were people who’d been invited because they’d become viral stars in the pro-Trump internet.

There was Mark and Patricia McCloskey, a couple that had gone viral after a video surfaced of them waving guns at Black Lives Matter protesters outside their house.

“You’ve seen us on your TV screens and Twitter feeds,” Mark said, nodding to their viral celebrity. “You know we’re not the kind of people who back down. Thankfully, neither is Donald Trump.”

The couple cast themselves as bulwarks against a chaos encircling the suburbs, incited by a “Marxist liberal activist” and “radicals” that comprise “Joe Biden’s party.”

“They are not satisfied with spreading the chaos and violence into our communities, they want to abolish the suburbs altogether,” Patricia said.

“At this moment in history, if you stand up for yourself and for the values our country was founded on, the mob — spurred on by their allies in the media — will try to destroy you,” Mark added. “President Trump will defend the God-given right of every American to protect their homes and their families.”

“This election is a decision between preserving America as we know it, and eliminating everything that we love,” he said. “As the guardian of America, Donald Trump is shielding the innocent from the selfish ambition of the selfish elites.”

Lara Brown, director of the Graduate School of Political Management at the George Washington University, contrasted the RNC lineup with speakers at previous conventions, which she has written about.

“When you look at the Democratic convention, many of their speakers, who were talking about some of the sufferings that they had endured, had policy solutions,” said Brown.

On Monday, several of the “everyday” Americans who spoke Monday night were there to tout specific Trump policies, but the policy prescriptions from the viral figures were less clear.

“When I look at the St. Louis couple,” she added, “I’m not really sure what policy issue they’re there to advocate.”