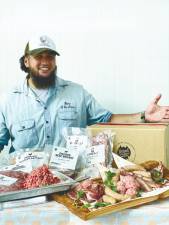 WHEN he studied culinary, Nazri Jameson did not think that making the perfect brisket was a big deal. But, as someone who doesn’t shy away from a challenge, he took it upon himself to produce a perfectly barbecued halal version of the dish.

It took him almost five months to perfect it, and the result is Beard Brothers BBQ which he opened with his fellow pitmaster, Afif Ter.

“It started back in 2013. I was a trained fine dining chef. I thought to myself that barbecue is easy. You can get barbecue at a birthday party. How hard can it be? I had a snobbish attitude about it,” said Nazri.

“But when I tried to do the brisket, I kept failing. That turned into an obsession to get it right.

“When you are obsessed about something, you dedicate a lot of yourself to it, always trying to improve it. In turn, you also want to share that passion with the people. That’s how it began,” he added.

He explained that it was about getting the brisket to a point where it is not dry, and has the perfect doneness with proper seasoning all around.

Many variables play a factor in making the perfect barbeque.

“For me, it’s about cooking this large piece of meat to a point where anyone who bites into it is absolutely happy. There is a science to it, and when you want to make it perfect, there is an art to it as well,” said Nazri.

Its menu includes beef, lamb, and chicken, all prepared with the same passion and obsession for perfection that Nazri had when he made his initial brisket.

“Brisket is still the king on our menu, but we have something for everyone” he said. “In the years that I’ve opened this establishment, I have seen people who come here for different reasons.

He added that he feels blessed to have a team that shares his passion. Together, they prepare everything in-house, from the imported halal meats to the sauces, and sides such as the mashed potatoes, coleslaw, and chips.

Over the years, the establishment grew. From the Barbecue eatery sprouted Beard Brothers’ kitchen, where they prepare their ingredients and sell meats, Beard Brothers’ Deli that specialises in sandwiches made with the same passion, and Umami Boru for ramen fans.

“None of the foods that we prepare here are easy to make. They all take time to prepar. But all that we serve is driven by our goal to serve the best, and we put a lot of thought into each item that we offer,” said Nazri.

This is apparent even in the drinks that they offer at Beard Brothers, one of which being sparkling lemonade on tap. The idea is that all the meats are fatty, and naturally we want something with some acidity to cut through the fat.

“Once we even served our dishes with wooden cutlery, to show folks that our meats are so tender that you can even cut it with wooden utensils,” said Nazri.

“However, I encourage people to eat with their hands. That’s the way to go.”

Understanding that some customers prefer to prepare their meals at home during the CMCO, Nazri and his team at Beard Brothers have introduced the BB Meatbox.

In it are more than 2.5kg of beef and chicken, in the form of minced meat, sausages, patties, and strips all ready to cook at home on the stove or in the oven. There’s even some ready-to-eat smoked beef brisket in the box.

In addition to food, Nazri said that his team has ventured into drinks as well. Some, like the butterbeer, is proving to be challenging, especially in recent times. However, they have developed their own cold brew coffee.

“Le Creme, the cold brew coffee, is actually a drink the Beard Brothers team and I have been developing and enjoying for the past couple of years. It did not occur to us to sell it to our customers until we began expanding our offerings,” said Nazri.