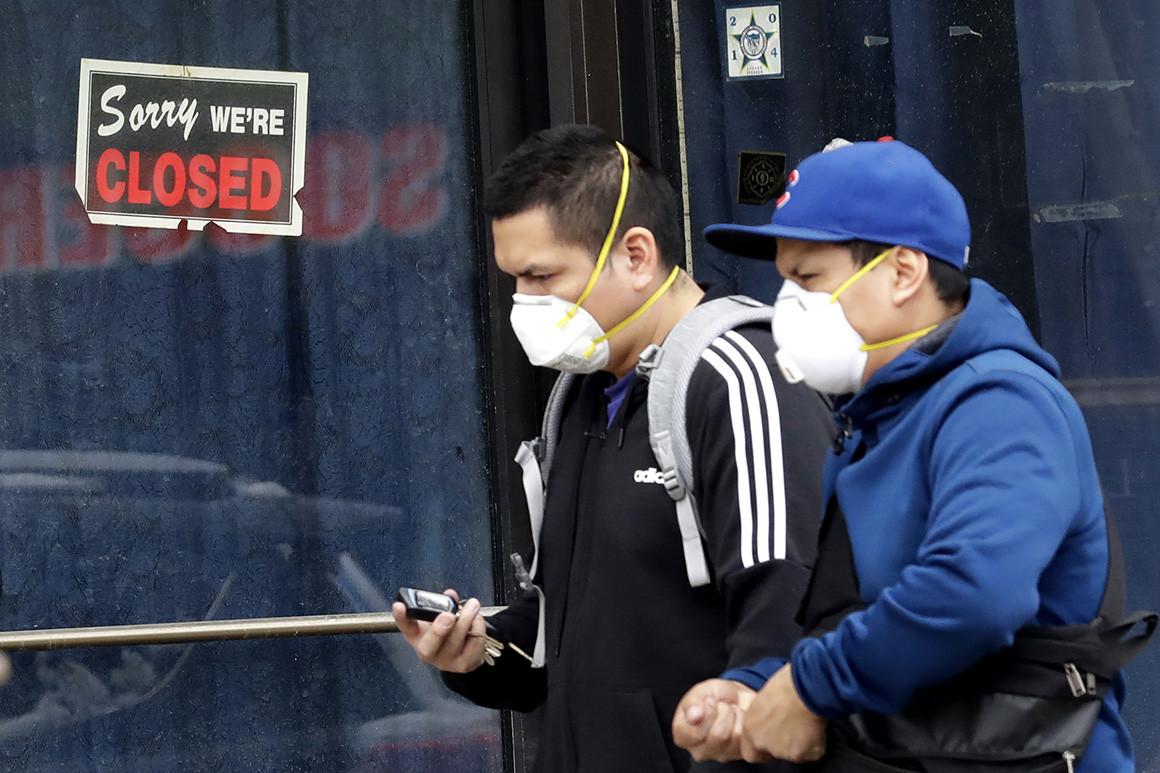 “Not only would health insurance corporations make massive profits off the plan—profits that come at the cost of the American taxpayers—but it would still leave tens of millions uninsured or underinsured,” the former Democratic presidential candidate wrote. “And during this pandemic, a lack of insurance means more Covid-19 transmissions and more deaths.”

America’s health care system since World War II has relied on the increasingly costly employer insurance market. But with 26 million people rapidly losing their jobs amid a massive health crisis, the idea of tying coverage to the workplace is facing its biggest stress test yet.

Employers, health care groups and unions badly want the employer system to emerge from the health crisis unscathed, believing it would ward off any new expansion of government health care. Joe Biden’s rise to becoming the presumptive Democratic nominee was a relief to the health care industry, which has spent the past two years attacking Medicare for All. Health care groups also oppose other more incremental government expansions, like a public option Biden and other moderate Democrats support.

“This crisis will be over — not soon enough, but it will be over — and we need to fundamentally keep that highway back to jobs and job-provided health care open,” said Ilyse Schuman, senior vice president of health policy for the American Benefits Council, which represents major employers. “That’s what Congress needs to do now, and employer-sponsored insurance plays a big role in that.”

Experts estimate the job-based insurance market has likely already lost millions of customers as unemployment skyrockets, and a growing number of insurers hoping to retain business are offering grace periods on premium payments. Few people losing their jobs sign up for temporary workplace insurance, known as COBRA plans, unless they desperately need the coverage. And it’s both complicated and extremely costly, since it comes without employer subsidies that typically cover the lion’s share of monthly premiums.

Newly unemployed people losing health insurance can often find cheaper or even free coverage through the Obamacare insurance markets or Medicaid. However, President Donald Trump’s refusal to broadly reopen the Obamacare markets or make enrollment easier for those eligible may limit the safety net’s reach. Many of the poor won’t be eligible for Medicaid in the remaining 14 states that have not expanded the programs under Obamacare.

While the health industry and Democrats still want to bolster Obamacare, an unusual bloc is pressuring Congress to fully subsidize workplace premiums for the uninsured. Corporations would benefit because the employer-based system supplies a big tax break for benefits they can use as a recruiting tool. Unions would keep the generous coverage they have negotiated with corporations. And hospitals and doctors could maintain the big payouts from private insurance, which are far higher than the Medicare and Medicaid rates paid by government.

Such an idea could hit the political sweet spot on Capitol Hill. Workplace plans, which covered an estimated 160 million Americans before the pandemic, remain popular. Democratic leaders in Congress know Republicans have little appetite for broadly expanding government coverage, and Biden has endorsed temporarily subsidizing workplace plans. Republicans, despite railing against insurer “bailouts” in Obamacare for years, are friendlier to employer-based insurance and may be more receptive to a deal that could prevent millions of people joining the Medicaid rolls.

The health care industry is spooked by a widely circulated projection that between 12 million and 35 million people could lose their employer health plan in the economic fallout from coronavirus. The same analysis from consulting group Health Management Associates predicts the uninsured ranks could swell from 28 million to 40 million people, while Medicaid rolls in expansion states would also grow. That prospect worries the hospital industry, which endorsed COBRA aid on Tuesday, since the safety net program typically pays much less than Medicare.

Meanwhile, the health care industry is also trying to win back Americans’ trust about the affordability of the system, just months after hospitals and physician groups helped derail an effort to ban exorbitant “surprise” medical bills. Big insurance companies are waiving deductibles and copays for their commercial plans and the Trump administration is offering Medicare payments to hospitals so they don’t charge uninsured coronavirus patients.

Industry experts downplay the idea the pandemic poses an existential threat to employer insurance, noting that once the economy rebounds the same dynamics that have made the market attractive will remain unchanged.

Still, the market has already taken a hit. Additionally the yearslong trend of small businesses dropping employee coverage will likely accelerate, either because they will have shuttered or need to cut costs.

Ultimately, the future of employer-based insurance will be steered by large corporations that are the backbone of the market, said Linda Blumberg of the Urban Institute. The uncertain prospects for recovery from this crisis, however, remain a wild card.

“I think a lot remains to be seen with regard to how strongly the labor market bounces back and how long it takes,” she said.

Unions, major insurers, hospitals and the consumer advocacy group Families USA have banded together through a group called the Alliance to Fight for Health Care, and are lobbying Congress to subsidize COBRA through the next stimulus package.

Supporters said COBRA aid would provide a backstop to hospitals and physicians, whose finances have been hurt by the cancellation of elective procedures during the crisis. Congress has already approved $ 175 billion to health care providers with few strings attached.

“Hospitals and providers are seeing tremendous expense and increase in uncompensated care and uninsured individuals coming in, while also seeing drops in elective procedures, so I think it’s money well spent in protecting employees in a time of crisis,” said Katie Mahoney, vice president of health policy for the U.S. Chamber of Commerce.

Support from unions puts pressure on progressive Democrats, the driving force behind Medicare for All, to back the policy.

“The health care crisis of a lifetime requires full emergency health care coverage for those millions of hardworking Americans who, through no fault of their own, have become unemployed,” Taylor said.

But the effort has raised eyebrows among some liberal policy experts, who say Democrats are overlooking the health care law they’ve spent the past 10 years defending. They said Democrats should be trying to expand that safety net at a time when health coverage independent from a workplace is more important than ever.

The law’s individual market plans are expensive but are still ultimately cheaper for the government to subsidize than employer coverage. Medicaid plans, which offer full coverage for lower-income adults in expansion states, are cheaper still. And analysts question whether the subsidies would be money well spent when they only buy temporary certainty for workers and their families, who may ultimately have to turn to the Affordable Care Act if the economy is slow to recover.

“At a time when you don’t know if people are going back to work, or where they’ll go back to work, getting them better ACA coverage would be more expedient,” said Arielle Kane, director of health policy at the Progressive Policy Institute.

“Almost no matter the employment outlook or time horizon, COBRA subsidies are unlikely to be the most cost-effective way of expanding coverage or relieving financial hardship,” said Matt Fiedler, former chief economist of the Council of Economic Advisers under the Obama administration. “They’re just not targeted on the right people.”

Congress subsidized COBRA in the last recession, before Obamacare was passed. The aid had limited reach — only about one-third of those eligible for subsidies signed up for coverage, according to a 2015 Labor Department review. Congress at the time agreed to a 65 percent premium subsidy. This time, groups are pushing to cover the entire amount.

Tom Leibfried, a health care lobbyist for AFL-CIO, acknowledged some progressives would rather expand government coverage through the crisis, but he stressed that it would be easier to work within the existing system to deliver faster relief.

“So as happened in 2009, during the Great Recession, it’s just more practical to turn to existing institutions and use those to make sure people get the care they need and don’t face financial hardship,” he said.