The Very Right-Now Allure of Going to Extremes 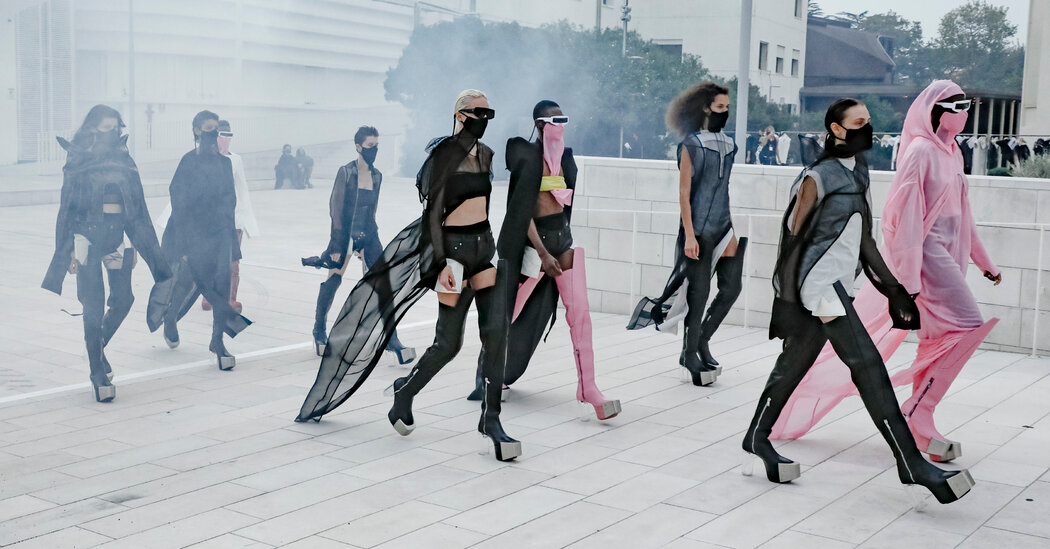 A monumental Brutalist casino on the Lido. An empty piazza in front of an even emptier beach, spotted with abandoned cabanas. Billowing smoke and hard core disco strains.

Also a stream of masked women in thigh-high boots and trigger-finger hot pants, black shadows of capes at their backs and jackets with shoulders like flying buttresses on top, Pepto-Bismol pink wisps of chiffon bandaging their torsos and sequined swathes of something knotted around the hips.

This was “Death in Venice,” the Rick Owens way: Take some Thomas Mann, mix it up with a dash of Dante (specifically Phlegethon, one of the five rivers of the Greek Underworld, featured in “The Inferno”), throw in some Donna Summer and stir into a fashion show. The references are enough to make your head spin, and the clothes looked more “Mad Max” than Penguin Classics, but the clash of cultures was enough to jolt anyone out of the fugue of digital viewing, or the Slough of Despond.

“At this point, I feel we have to sit up and present something a little extra,” Mr. Owens said on a FaceTime call. “There’s a danger in feeling sorry for yourself.”

He’s onto something. It would be easy — faced with the dispiriting mix of rising Covid cases, the chaos of the American presidential race, the quarantined White House and the fact it’s hard to feel, in the wake of such news, that any of this really matters — for a designer to retreat into “wearability.” But it’s also increasingly clear that to do so is a mistake.

You could see it at Chloé, where Natacha Ramsay-Levi staged a show before the show, capturing her models as they stood around outside poking at their phones, chatting and otherwise passing the pre-runway time in lacy little dresses, prairie florals and bright, slogan-bedecked separates chirping “Hope.” It was perfectly pretty and awfully easy to wear (half the public didn’t seem sure who was a model and who was not, except the models didn’t wear masks) but also so soft-focus it slipped away before it ever really came into view.

Balmain, shockingly, did too, despite the occasional fluoro, millions of crystals and bit of red latex, as Olivier Rousteing toned down his usual ’80s and ’90s bombast (“toned down” being a relative term) in favor of a universal uniform of gray or archival logo print suiting for everyone, from older models to children, men and women.

It was all about the shoulder — mega-pagoda for women, way out there for men — matched with bike shorts or stretchy flared jersey trousers/bodysuits. (Mr. Rousteing, on a — yes! — call, likened them to sweats.) They were wide enough to carry the weight of the world but firmly rooted in the idea of the Zoom meeting, when what matters most happens above the waist. The problem is that’s a look of last summer, not the future.

And shouldn’t the future be where we are all heading?

It’s fine to go digging around in the past, but only if you use it to build something new. Glenn Martens did, at Y/Project, with the fashion equivalent of Transformers: a swish crimson evening skirt with a waist bustle that can be unknotted and reworked as a top; a trench that unbuttons down one side to expose a new layer (and attitude) beneath.

So did Dries Van Noten, transmuting the work of Len Lye, a New Zealand artist of the 1920s and ’30s who played in the fields of light, nature and movement; burning planets seen in the night sky and rainbow shades. They became selective prints on shift dresses, shorts, even bathing suits — less decoration than affirmation, with a refreshing clarity of purpose.

As Mr. Van Noten said on yet another call (it is the pandemic equivalent of the backstage interview): “I think we need beauty, but not beauty that is nostalgic, that says the past was a better place. Beauty that gives you energy.” That makes you want to get out of bed in the morning and do something.

At Loewe, Jonathan Anderson didn’t give anyone a choice; he sent a box. A very big artist’s portfolio box. That required opening.

Then he one-upped his own previous show-in-a-box experience of cut-’n’-keep paper dolls, created for his JW Anderson line (then reinvented as a portable photo gallery for his Moncler collaboration), and sent out a show-on-a-wall: a giant cardboard container holding wallpaper, 16 bus station-sized posters, glue, a brush, scissors, sheet music and even a beetroot scented ceramic, so that recipients could paste ’n’ mount their own shadow play, in the order and position they wanted.

“It was extreme,” Mr. Anderson said (also on a call, framed by his wallpaper in the background). “If you’re in this deep, you’ve just got to go for it.”

He was right: It was forced engagement of the most roll-your-eyes kind. But also fabulous.

It was a trench with romantic poet’s sleeves and a dropped balloon skirt and a doily of a hand-embroidered broderie anglaise prom dress with boned petals at the neck so stiff they looked like place mats, or wings. It was a crimped corset and ballroom pouf with a sheer scrim of a overskirt draped on top, and a bias siren slink shaped from knotted knit embedded with thousands of glinting micro-sequins. A tuxedo with minutely pleated curving clown pants and a T-shirt dress finished in a mille-feuille of flounces. “A volume collection,” as Mr. Anderson said, in all meanings of the word.

It was the puzzles that became the past-times of choice during of the pandemic reinvented as a home renovation game, and a tour through the totems of couture design subverted with a wink and a flourish. After all, if you don’t learn from history — well, you know. Never has that axiom looked so good.

Excuse me while I go get the glue.

ByDina GachmanIf there’s one thing we could all use in 2020, it’s something to look forward to. Which could be why holiday decorating has...
Read more
Fashion

BySporting News The Philadelphia Eagles will take on Daniel Jones with what feels like half of their regular roster out with injury.The injury bug has...
Read more