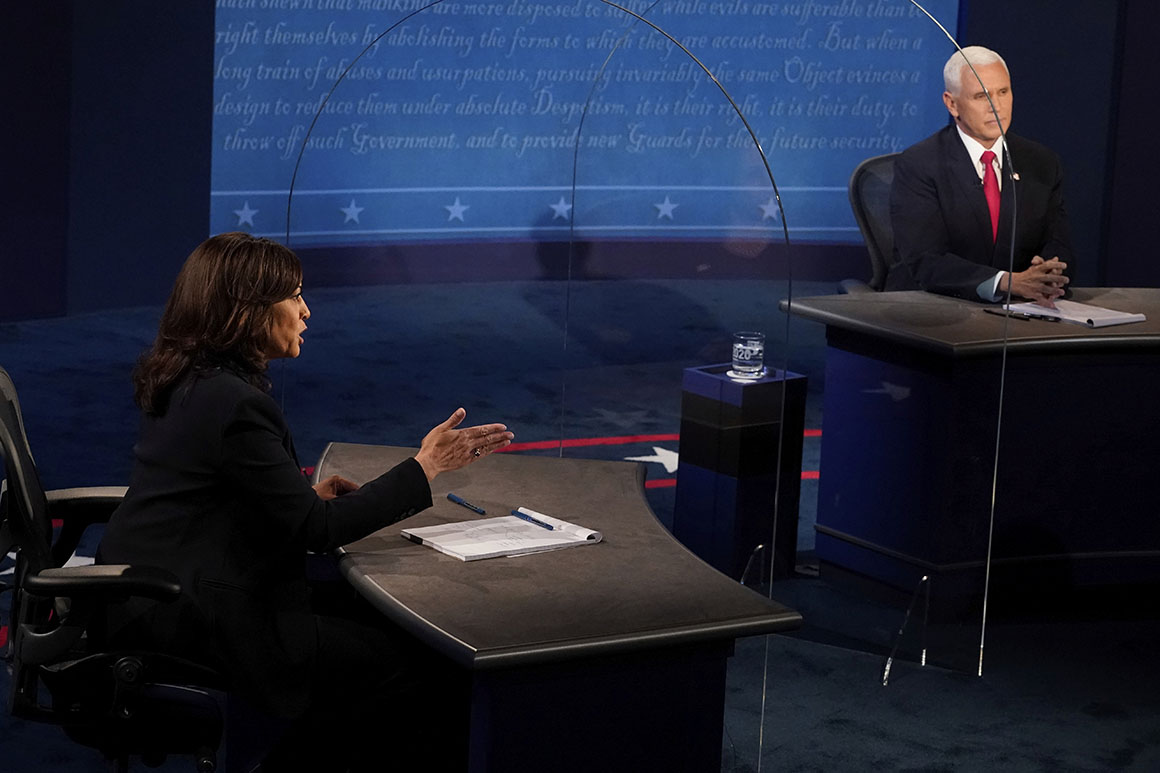 That was before Trump came along and turned the first debate into a spectacle, as he did on Sept. 29 by interrupting Joe Biden for 90 minutes. So maybe the way to see the Harris-Pence snooze-fest is as a peek into the future of American politics once this Trump-dominated era is over.

Harris and Pence are both younger, more well-spoken, and closer to the beating hearts of their respective parties. Considering the challenges anyone would have defending the Trump record on the pandemic, Pence’s ability to leave the stage after 90 minutes without being gutted by Harris was a bar cleared.

The fly that nested in Pence’s hair for more than two minutes was more embarrassing to him — and memorable to viewers — than any of Harris’s jabs. That also has to be seen as a kind of accomplishment.

The two plexiglass screens that separated the candidates were visual reminders of the Trump administration’s response to the coronavirus. There has never been a debate where one candidate requested that special safety equipment be installed because there was a not-unreasonable concern that their opponent might infect them with the deadly disease they were charged with getting under control. Like the fly, the physical barriers were more memorable and more embarrassing to Pence than anything Harris said.

Harris was well-prepared but restrained. She did not, as previous vice-presidential candidates have — including Joe Biden in 2008 and 2012 — play the role of vicious aggressor. In previous presidential campaigns that role has sometimes diminished the running mate.

Whether by design or happenstance, Harris seemed more interested in coming across as civil and presidential rather than as an attack dog. Considering the dynamics of the campaign that may have been a politically astute decision. She and Biden are well ahead in the polls and defining Harris as someone ready to be president, rather than as a political assassin, may be a more important use of her limited time in the spotlight.

But the vice presidential debate did nothing to alter the course of the race. Debates are generally won and lost not on stage in real time but in their aftermath, when the media, abetted and prodded by campaigns, define the key moments. But there wasn’t a “You’re no Jack Kennedy” soundbite that will be remembered decades from now.

Instead, there was a lot of very familiar prosecution of the Trump record on the economy, health care, and the pandemic from Harris. And there were a lot of scattered attacks on Harris and Biden as too left wing from Pence.

This was the kind of debate that will be seen as a victory for Pence by Republicans and a victory for Harris by Democrats. For the tiny sliver of undecided or wavering voters there was little new information to help them make up their minds.

Of course, Kamala Harris and Mike Pence never had a chance to break through. Few politicians do in the age of Trump.

The last week has been about one big thing: Trump’s mismanagement of the pandemic. Trump has ensured that instead of a quiet isolation while he recovers, he will remain front and center. A vice presidential debate can’t top reports of the infected president roaming the halls of the West Wing shedding virus as he exhales while aides scramble around him in goggles and gowns and gloves.

Pence’s robotic drone and Harris’s practiced jabs won’t get the media to avert its eyes as Trump tweets conspiracy theories in all caps and praises criminal acts against protesters while we all speculate as to whether the president is always this erratic or whether his behavior is the result of the dexamethasone coursing through his veins.

But if Harris and Pence didn’t offer any material that will be remembered in the future, perhaps their debate gave us a glimpse of the future. Consider the contrast between Trump’s actions in the last debate and the relative normalcy of Harris and Pence sparring Wednesday night.

Pence and Harris are good avatars for what the two parties might look like in a post-Trump and post-Biden world: a more conventionally conservative and much less theatrical Republican, and a younger, more diverse, and more progressive Democrat. As Trump likes to remind us, it will be a lot more boring.