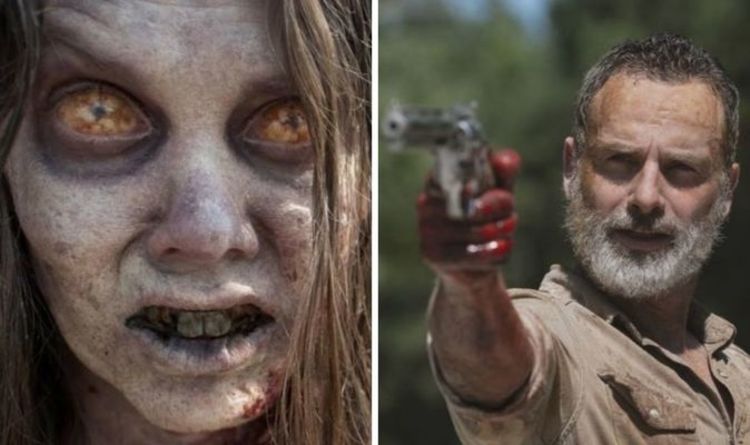 Rick Grimes’ (played by Andrew Lincoln) story on The Walking Dead seemed to come to an end following his mysterious departure at the end of season nine.

After miraculously surviving a deadly explosion, Rick is found by former leader of the Scavengers Anne (Pollyanna McIntosh) and whisked away to an unknown location in a CRM helicopter.

Since then, Daryl Dixon (Norman Reedus) has taken leadership over the team of survivors, while theories have continued to circulate around the fate of Rick Grimes.

Following Andrew’s departure from the television series, it was announced the fan favourite character would continue life in a series of three feature-length films, with other characters expected to make appearances.

While most plot details are being kept under wraps, some gruesome insight regarding the premise of the upcoming trilogy has been revealed.

In a synopsis hitting a little too close to home for some during the ongoing pandemic, sources revealed one of the throughlines for the series will be Rick’s involvement in finding a cure for the ‘zombie problem’.

WGTC said: “The upcoming Walking Dead movies will see longtime protagonist Rick Grimes alive and well, having been taken to a human encampment focused on finding a cure for the zombie problem.”

However, despite the optimistic motive behind putting an end to the zombie apocalypse, audiences should expect the trilogy to embody the bleak tone of the series, as sources suggested Rick’s series could have the feel of a twisted prison movie.

They continued: “All is not well with the survivors Rick meets, stoking the flames for more of the interpersonal conflict that the comic book and show are known for.

“Apparently, these scientists will have a mad side that includes experimenting on unwilling human subjects and being a little bit twisted, as the series’ antagonists tend to be.”

As the search for Rick continues in the background of the series, popular characters such as Shane (Jon Bernthal) and Michonne (Danai Gurira) have also been tipped to make appearances in the upcoming films.

WGTC added: “Furthermore, it’s said that something will happen in season 11 that leads to a number of characters heading out to go rescue Rick and help him escape from where he’s being held.”

Much like the popular Marvel Cinematic Universe, fans can expect the story of the Walking Dead to crossover between multiple formats as the mainline series is teased to set up major events in the Rick Grimes film trilogy.

Moreover, while filming for both the television and film series has been put on hold amid the coronavirus lockdown, director and producer Greg Nicotero confirmed work on the films’ scripts are already underway.