There's a Surprising Connection Between Dangerous Algal Blooms And The...

A loss of snow and ice on Earth’s highest mountain peaks could be driving dangerous changes in the food chains of distant coastal water, according to new research.

Like a gardener turning over soil, cold winter winds blowing down from the Himalayan mountains are known to fertilise the Arabian sea by chilling the surface and causing the dense waters to sink, only to be replaced with fresh currents rich in nutrients.

Due to climate change, however, winter monsoons are rapidly becoming warmer and moister, leaving marine habitats with less oxygen and nutrients, and allowing microbes that thrive in an oxygen-depleted wasteland to bloom instead.

Recently, it’s gotten so bad, the thick green swirls of algal blooms can actually be seen from space. 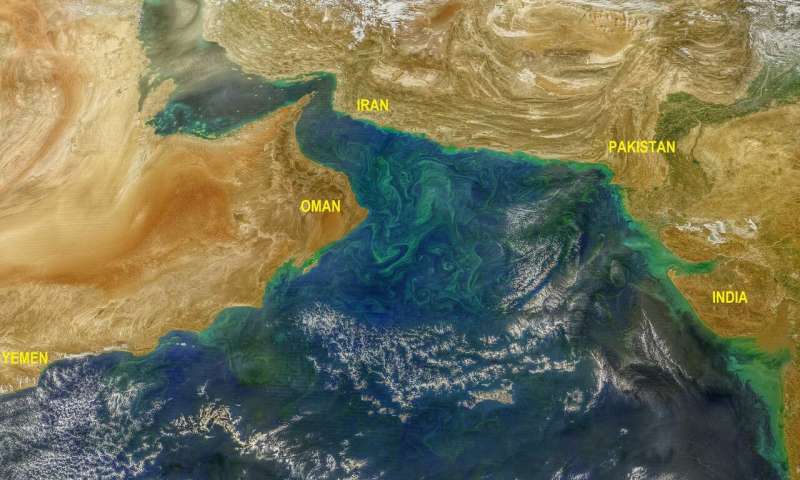 Noctiluca blooms in the Arabian Sea, as seen from space. (Norman Kuring/NASA)

What you’re looking at is Noctiluca scintillans – also known as sea sparkle for its bioluminescent effects. This is a millimetre-long marine dinoflagellate that can survive and thrive without oxygen or sunlight. Before the turn of the century, however, its presence along the coasts of Somalia, Yemen, and Oman was practically unheard of.

Today, it regularly causes massive blooms with widespread effects on ecosystems and industries. Something has clearly changed quite rapidly, far more than seems natural, and researchers now think the rise of Noctiluca in the Arabian Sea has to do with the climate crisis.

“This is probably one of the most dramatic changes that we have seen that’s related to climate change,” says Joaquim I. Goes from Columbia University, who has been studying the rapid rise of this organism for more than 18 years.

“We are seeing Noctiluca in Southeast Asia, off the coasts of Thailand and Vietnam, and as far south as the Seychelles, and everywhere it blooms it is becoming a problem. It also harms water quality and causes a lot of fish mortality.”

Using field data and NASA satellite imagery, scientists have now connected the rise of these algae blooms to melting glaciers and a weakened winter monsoon.

Since 1980, the authors found mixing on the surface of the Arabian sea had decreased alongside warming winter monsoon winds that were less powerful but more humid.

For the tiny organisms that help make up a solid base to the ecosystem’s food web, such as diatoms, this implies a problem. But for the less appetising Noctiluca, the authors say this is a “tremendous competitive advantage”.

In the lab, researchers have previously shown Noctiluca cells photosynthesise more efficiently under conditions with low oxygen or when nutrients are depleted.

Diatoms, on the other hand, need nutrient-rich conditions on the surface of the ocean where sunlight is ample. And if monsoon winds aren’t stirring up that habitat on a yearly basis, there’s a serious problem.

This means Noctiluca is a fierce competitor to many of the essential organisms holding up our marine environments. When winter monsoons are lacklustre and less nutrient mixing occurs on the surface of the sea or ocean, diatoms struggle to survive.

On the other hand, Noctiluca can survive in harsher environments, sometimes even by eating other microorganisms. Additionally, ammonia easily builds up in their own bodies, making the algae a particularly nasty, even poisonous morsel.

“Most studies related to climate change and ocean biology are focused on the polar and temperate waters, and changes in the tropics are going largely unnoticed,” says Goes.

In light of their results, the authors suggest Noctiluca outbreaks are triggered each summer by the intrusion of hypoxic waters into the upper layers of the Arabian sea.

Here, the algae can rapidly photosynthesise, while other organisms are left “severely nutrient limited by a weaker convective mixing” due to a loss of snow cover in the Himalayas.

In countries like Somalia and Yemen, the authors fear this annual bloom, which is only getting bigger with the years, could harm local fisheries, leading to further unrest, poverty and deprivation as climate change strengthens its grip and the Himalayas continue to melt at an unprecedented rate.

“The inability of large zooplankton, except salps and jellyfish to feed on Noctiluca, is indicative of the capacity of Noctiluca blooms to short-circuit the trophic food chain,” the authors write.

“Thus, their annual reoccurrence and growing dominance in winter each year will require a revision of our fundamental understanding of the [Arabian Sea] food web.”

The study was published in Nature Scientific Reports.