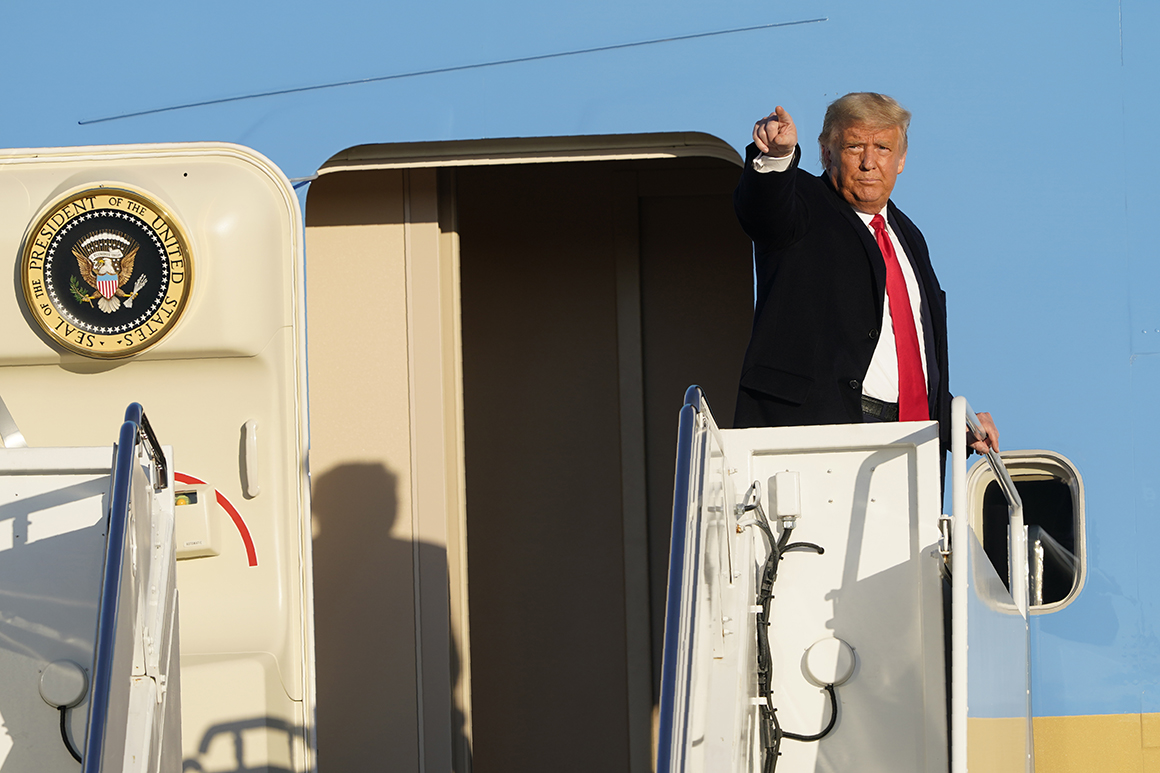 And as vulnerable Senate Republicans cast themselves as a firewall against the left’s ambitions — killing the filibuster, targeting the high court and making D.C. a state — Trump is attacking Stahl, Anthony Fauci and Hunter Biden. Rather than talking up Barrett nonstop, he’s celebrating the support of 50 cent, a rapper who peaked 15 years ago and dislikes Joe Biden’s tax policies.

While those issues may animate Trump and his base, it’s certainly not what Republicans in battleground states are talking about.

“There’s just not any discipline. I mean the president’s got a great record to run on. But we don’t hear too much about it. And I just think that’s a mistake,” said Sen. John Cornyn (R-Texas), who is the rare Republican running significantly ahead of Trump. “And Biden is happy to sit in his basement… and just let the president do his thing.”

Sen. John Thune (R-S.D.), the Republican whip, said “some of the tangents sometimes that candidates get off on are not necessarily the things that I think move voters.”

“If you’re trying to win the argument with undecided voters you want to talk about the issues that are important to them,” Thune said, listing the economy, national security and coronavirus. “That’s what our members are trying to do, and hopefully that’s a pivot the president can make as well.”

As Senate Republicans tried to hammer Democrats for stopping the GOP’s coronavirus package on Wednesday afternoon, Trump tweeted photos of himself being interviewed by Stahl for “60 Minutes” and said she has “no idea” about his health care work.

Thursday night’s debate between Trump and Biden could further undercut Republicans’ fight for their majority. Trump is already telegraphing an aggressive stance, complaining bitterly on Wednesday afternoon that the ability to mute microphones is “unfair” and calling debate moderator Kristen Welker a “very biased person.”

Jason Miller, a senior adviser to Trump’s campaign, took issue with the suggestion that the president is off message.

“The president is running well ahead of some of these senators,” he said. “So anyone who is taking issue with the president, might be better use of their time to work on their own campaigns.”

In 2016, Senate Republicans largely kept their distance from Trump — running what GOP officials called “sheriff’s races” that largely sidestepped Trump’s attacks on federal judges, rhetoric about a border wall and “lock her up” rally chants. That’s a far more difficult task in 2020 after four years of defending Trump, voting for his priorities and acquitting him in an impeachment trial.

Few Republicans can win reelection without Trump winning their states as well. Apart from Maine’s Susan Collins, the opportunities for ticket-splitting GOP senators to win reelection are looking dim at best.

“There’s going to be a universe of voters that will vote for the president [and] not me … and there’s a universe where they vote for me and not him,” said Sen. Thom Tillis (R-N.C.), who’s in one of the hottest races in the country. But overall, he said, “we’re substantially tied together in terms of the outcome of the election.”

Worse for the GOP is that in some critical races, including Kansas, Montana and Arizona, Republican senators or candidates are running several points behind Trump, who is trailing his own 2016 margins in states he won.

Alex Conant, who worked on Sen. Marco Rubio’s presidential campaign, put it bluntly: “The president’s lack of a message is a drag on the entire ticket.”

White House officials are trying to smooth over divergent strategies and an internal Republican firefight over coronavirus spending. Chief of staff Mark Meadows visited Senate Republicans during their Wednesday lunch to update them on negotiations and was complimentary of McConnell, who opposes the White House talks with Pelosi.

During Wednesday’s meeting with Meadows, one senator raised the question of why Trump wasn’t mentioning the Senate GOP’s $ 500 billion proposal and instead trying to spend more than Pelosi, according to an attendee. Meadows replied that it was a good point.

“There’s a general feeling that bidding up and up is not going to be well received,” said Sen. Shelley Moore Capito (W.Va.) of the GOP’s reaction to the ever-growing $ 2 trillion negotiations.

If the Trump administration and Pelosi are ultimately able to reach a deal, it may come too late to help Senate Republicans at the polls. It may even come too late to pass the Senate before Nov. 3, if it can pass at all.

Thune also said there was no way to get 13 or more votes the GOP will need to pass a bill of that size and said McConnell prefers to have strong Republican support for whatever he puts on the floor. Many Republicans up for reelection would likely support a big relief package, but others have warned it could hurt the GOP politically.

Whether Trump is hurting endangered senators is a debate playing out in real time.

While many Senate Republicans are stuck in Washington working on Barrett’s nomination or other matters, Trump’s campaign schedule has taken him through the heart of the Senate map. GOP Sens. David Perdue of Georgia and Martha McSally of Arizona joined him at recent rallies, while Sens. Joni Ernst and Tillis missed events while in Washington.

Both Trump and McSally criticized her opponent, Mark Kelly, while on stage in Arizona Monday, but Trump told reporters he doesn’t view the races as being “tied together.” Trump, notably, is running ahead of McSally in Arizona. Last week, Perdue mocked Sen. Kamala Harris’ name on stage during his warm-up speech for Trump — and ended up raising millions for his rival Jon Ossoff.

But outside of campaigning alongside the president, Republicans have struggled to break through in media coverage and will likely do so the rest of the week. Barrett’s nomination is set to be approved by the Judiciary Committee Thursday, but that’s sure to be overshadowed by Trump’s debate with Biden on Thursday. Trump’s poll numbers dipped significantly following his first debate performance, and Senate Republicans saw a slide as well. Since then, there’s been little effort to defend his messaging.

“Are they looking to pick a fight with the president? No, they’re not,” said TJ Petrizzo, a GOP lobbyist. “But they’re certainly not trying to defend what he’s been talking about for the past few weeks.”

The 2014 class of GOP senators were six months into their term when Trump launched his presidential bid and the pressure to answer for him has been essentially nonstop since. And while the party has spent four years dealing with Trump’s controversies, they are more salient right before an election.

“Nobody has more experience answering questions about Trump than this group of Republican senators,” said one GOP strategist involved in Senate races, who requested anonymity to speak candidly. “They’ve been doing nothing but that in every interaction with reporters since Trump came down the escalator.”

Even so, few in the GOP are exulting about the divergent electoral tactics in the heat of a brutal Senate battle. A senior administration official said that “in a vacuum, everyone would like to get on the same page, but the reality is, people have to do what people have to do.”

Senate Republicans wouldn’t disagree. But such an approach may not do much to help a party facing the prospects of a potential blow-out in 13 days.

“What he’s thinking about that day, he says it. And that changes moment to moment. And that’s who he is,” said Sen. James Lankford (R-Okla.). “The president’s on the ballot, the House and the Senate’s on the ballot — and you can send individual messages if you want.”