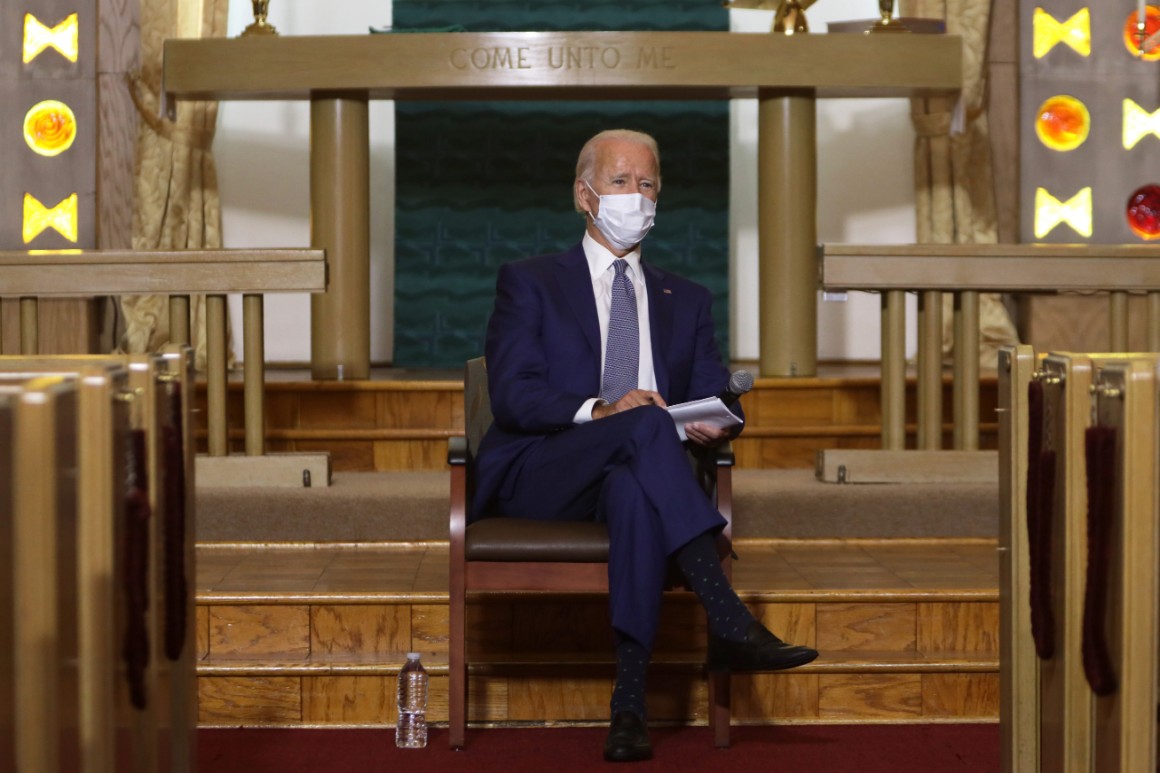 “There’s a lot of folks who thought that, well, the president’s made great strides with his law and order (message) … that, boy, after his convention he really made inroads,” Biden said, lowering his voice to a whisper as if he were sharing a secret. “He hasn’t. Not at all.”

Biden’s visit came two days after Trump toured the wreckage of the city in an upper Midwestern battleground that has become a microcosm of the country’s deep divisions. State and local officials had discouraged Trump from making the trip, fearing it would sow further rifts. Trump did not meet with the Blake family, saying he didn’t want to sit through a meeting with the family’s lawyers present.

Biden recounted how he had met with Blake’s family earlier in the day and was struck by their resilience following the police shooting that left Blake paralyzed below the waist. Blake was shot several times in the back in front of his young children. The unrest erupted amid a summer of uprisings against anti-Black police violence and racism.

“What I came away with was the overwhelming sense of resilience and optimism about the kind of response they’re getting,” Biden said. Blake’s mother “said I’m praying for Jacob, but I’m praying for the policeman as well. I’m praying that things change.”

Biden added that Blake was fighting to overcome the shooting and that he said “nothing was going to defeat him.”

After the meeting, Biden joined several members of the Kenosha community — from a fire fighter to a small business owner to an alderman — at the church to hear about their experiences through the unrest. The speakers also touched on racial disparity that has existed in Kenosha long before the shooting, painting a picture of a community in pain.

Biden spent the majority of the community meeting listening and jotting down notes on his various policies that he believes would address some of their questions. But in his responses, he called himself a “congenital optimist” and pushed a message of hope.

One of the community members who spoke was Porsche Bennett, an organizer for Black Lives Activists Kenosha. Bennett expressed dismay at the lack of progress she’d seen in the city, in spite of positive rhetoric, and urged Biden to see a distinction between rioters and protesters.

“In a protest, our voice is heard,” she said. She expressed dismay at hearing empty promises and hoped there would be substantive action to improve conditions for her children.

Biden expressed empathy for the frustration that could lead people to more disruptive forms of unrest. He said he could never understand the feeling of wondering if his child would come home simply because of the color of his skin.

“I can intellectually understand. But I can’t feel it,” Biden said.

The Kenosha trips followed a spate of polls showing Biden with a solid lead nationally despite a barrage of attacks from Trump calling his opponent as weak and beholden to leftist radicals. On Monday, Biden gave a speech in Pittsburgh decrying the violence, looting and arson as the antithesis of peaceful protesting. He also challenged Trump to condemn all violence, including the deadly shootings by a supporter who faces murder charges after killing two protesters in Kenosha.

The week has brought a slew of new polls assessing the impact.

Biden leads Trump by 8 percentage points — 52 percent to 44 percent — among likely voters in Pennsylvania, according to a Thursday survey conducted by Quinnipiac University. That same poll shows Biden ahead by 3 points — 48 percent to 45 percent — in Florida, a lead that falls within the survey’s margin of error. On Wednesday, new national surveys conducted by live interviewers showed fairly consistent results: Biden, hovering around 50 percent, held leads of 7 to 10 percentage points in all four polls, while Trump was in the low 40s.

Speaking at the church Thursday, Biden said the killing of George Floyd in Minneapolis was a “wake-up call” not only for the country, but the world. It brought home the reality of anti-Black violence in America and spurned a new drive throughout the country to fight for racial justice, he said.

Biden cited the high support for the Black Lives Matter movement and the mobilizations in cities around the world. “The public is ready to do these things,” Biden said, referring to policy items intended to combat racial disparities. “I promise you.”

“The country is ready, and if they’re not, it doesn’t matter,” he added, turning attention to ending centuries of racism and injustice. “There are certain things worth losing over—and this is something worth losing over. But we’re not going to lose.”

The former Delaware senator and vice president also spoke about his own experiences amid the unrest that gripped Wilmington, Del., in the wake of Robert Kennedy and Martin Luther King Jr.’s assassinations. He described the military personnel stationed on street corners and the hopelessness looming over the racial clashes of the era.

He also contrasted that image with his vice presidency several decades later, serving with the country’s first Black president. Biden used the story to assert that progress toward racial justice was possible. Biden listed a number of policy initiatives he would launch to address racial disparity, from criminal justice to education reform.

“I can’t guarantee everything will be solved in four years,” Biden said. “But I can tell you one thing: It’ll be a whole heck of a lot better.”