‘They made a really big mistake’: Biden confronts a regret of the Obama years 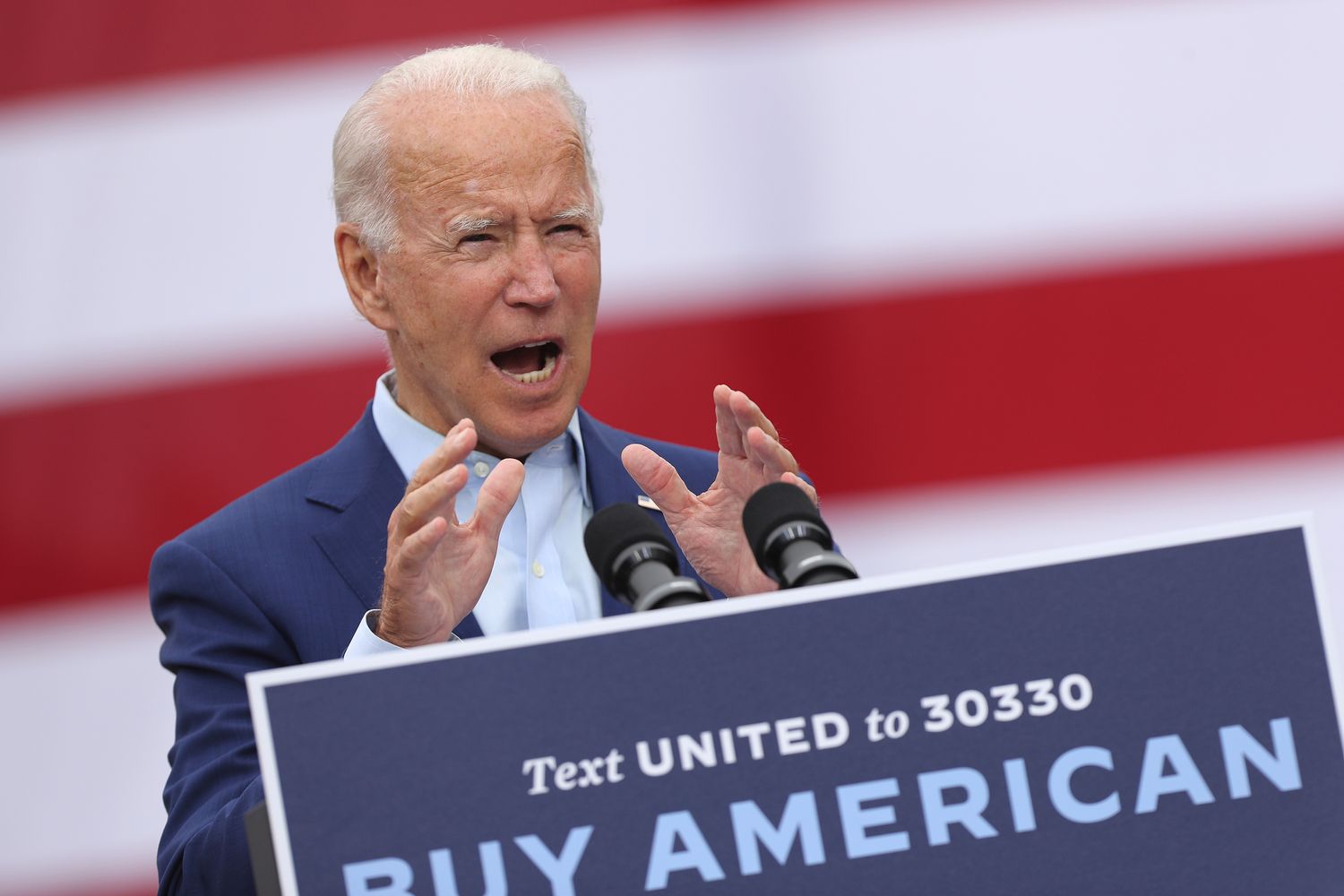 Should Biden take the White House and get a Democratic Senate, it will likely all translate into an immediate push to roll back President Donald Trump’s corporate tax cuts, slap significantly higher taxes on wealthy Americans and push through a multitrillion-dollar stimulus spending package aimed at fighting the Covid-19 virus, sending cash directly into people’s pockets, renewing enhanced unemployment benefits, rescuing struggling state budgets and investing in new infrastructure projects.

Joe Biden is putting together a plan for getting the economy out of a pandemic-sized ditch ahead of the November election — and it’s shaping up to include a whole lotta spending.

“The magnitude of the crisis in 2008 was enormous, but this time we’ve got multiple overlapping crises,” said Jake Sullivan, the Biden campaign’s senior policy adviser who served in a similar role for Hillary Clinton’s campaign in 2016. “As a result, the sense of possibility in both policy terms and political terms is big both in the scope of the agenda and the size of the investments the vice president wants to make.”

In Obama’s early years in the White House, liberals complained about the influence of some of his more center-left advisers including former Treasury Secretaries Larry Summers and Timothy Geithner.

Some progressives spent years criticizing Obama for decisions they saw as too friendly to Wall Street. They also saw Obama’s roughly $ 800 billion stimulus package as too small to address the scope of the Great Recession, a mistake they say helped lead to years of slow growth — for which Obama and Biden are still getting hammered politically — and increasing income inequality.

Defenders of the stimulus say it largely worked to end the recession and that the White House faced constraints on size forced on them by the Senate. But they acknowledge that state and local job losses and other budget cuts were among the problems that sapped the recovery for years — a point House Democrats have maintained as a top-of-mind concern this year.

The broad economic advisory group is not totally dominated by hardcore liberals. Gene Sperling, who served in both the Obama and Bill Clinton administrations, is also an important voice in Biden’s ear as is Jeff Zients, who served as Obama’s National Economic Council director and is now a co-chair of the Democratic nominee’s transition team. Zients is a wealthy investor with deep ties to the finance industry, giving the campaign the ability to reassure corporate America that their concerns won’t go entirely unaddressed. Ben Harris, who also served as Biden’s top economic adviser in the Obama White House, is also said to be a somewhat more moderate voice with experience in the financial industry. But even people like Sperling have trended left in recent years — though they may stop short of pushing Medicare for All.

Biden also talks to Summers, who has moved decidedly to the left since serving in the White House. The former Clinton Treasury secretary and Obama NEC director has become less concerned with deficits, given structural problems in an economy that has tilted most of its gains toward the upper end of the income spectrum in recent years. Covid-19 has only worsened that problem for blue-collar workers who don’t have the luxury of working from home like many high-earning, white-collar workers.

Biden and his advisers have avoided putting a dollar figure on the size of the stimulus the former vice president would seek if he wins. Some of it depends on whether Congress approves any further spending this year on top of the nearly $ 4 trillion already approved to fight the economic devastation wrought by Covid-19, which led to the biggest quarterly economic decline on record and has left nearly 30 million people still receiving some type of unemployment assistance.

Biden told POLITICO earlier this year that he wanted a package “a hell of a lot bigger” than the initial $ 2 trillion CARES Act. He is said by close advisers to be deeply concerned with economic “scarring” from the Covid-19 crisis, meaning lasting impacts on younger workers if they can’t quickly return to the labor force and begin forming households. Many of these lessons stem from the grinding nature of the recovery from the Great Recession.

In a recent interview, Bernstein suggested that if he wins, Biden is anticipating an economy still operating well below potential — the so-called “output gap” — and in desperate need of massive federal intervention.

“Every forecast I’ve seen, including my own, suggests that the output gap and the unemployment rate will be very high at the beginning of next year,” he said. “I’m not going to give a number in terms of trillions, but it would need to be definitely very significant in the spirit of the magnitudes of the bills we’ve seen so far.”

And Biden will come under immediate pressure from the left, if he wins and Democrats take the Senate, to go as big as possible on stimulus spending, tax hikes on the wealthiest and new regulations on Wall Street. Progressives are already concerned about some of Biden’s comments suggesting a concern about long-term deficits and paying for spending bills.

“The idea that the U.S. faces any major risk from our debt burden is simply wrong,” said Dean Baker, senior economist at the Center for Economic Policy and Research and a frequent critic of the size of Obama’s 2009 stimulus bill. “If for some reason private investors became more reluctant to hold U.S. debt, the Fed could simply step in and buy it. If the U.S. is struggling to recover from this recession, there is no reason to be concerned about running large deficits.”

Baker added that he was pleased for the most part with the makeup of Biden’s economic advisory team and suggested that any stimulus bill should be around 4 to 5 percent of annual GDP or around $ 1 trillion per year.

“As a group these people are pretty progressive and at the very least they will have his ear. Whether they carry the day in arguments or not who knows,” Baker said. “But Biden was there under Obama and I think he recognizes what is universally recognized among Democrats that they made a really big mistake in not getting more.”

Biden last week also said that boosting the corporate tax rate would be among his first acts as president. “I’d make the changes on the corporate taxes on day one. The reason I’d make the change on corporate taxes is it could raise $ 1.3 trillion if they just start paying at 28 percent instead of 21 percent,” he said on CNN. “What are they doing? They’re not hiring more people. What are they doing? They are buying back their own stock.”

In addition to a large stimulus and an increase in the corporate tax rate, Biden has pledged to dismantle the Trump tax cut that took effect in 2018, instituting higher marginal rates on individuals with incomes over $ 400,000. “I’m going to get rid of the bulk of Trump’s $ 2 trillion tax cut,” Biden told wealthy donors in June. “And a lot of you may not like that but I’m going to close loopholes like capital gains and stepped-up basis.”

He’s also essentially erased Trump’s advantage on the economy as an issue in the last several months. Several polls show the two candidates tied on an issue where Trump enjoyed double-digit advantages in the spring. Biden is also trying to cut into Trump’s 2016 numbers among Midwestern blue-collar workers with a plan to impose higher taxes on companies’ foreign profits and offer tax breaks for domestic manufacturers.

And the Democratic nominee does not plan to shy away from hammering a message of boosting taxes on high earners and big companies, despite Trump’s constant attacks that Biden’s approach would tank the stock market and kill the economy.

The Biden campaign is well aware of polling data suggesting Americans overwhelmingly support such higher taxes and the numbers have only risen since Covid-19 slammed blue-collar workers especially hard.

Of course, all of Biden’s big plans for taxes and spending depend on Democrats controlling all of Congress and perhaps jettisoning the legislative filibuster, a dramatic move that would mean needing only 51 votes in the Senate to move major spending bills beyond tax legislation.

“People recognize that we are going to need a significant magnitude of investment,” said Sullivan, Biden’s policy adviser. “That’s not to say the GOP wouldn’t try and resist, and all of a sudden put on their green eyeshades again on spending. But the realities today, in terms of what can be invested to get back to full employment, are just different than they were back in 2009.”

Interrupting, name-calling, rule-breaking. These educators have no time for that kind of mischief - especially when it's coming from presidential candidates. A kindergarten and preschool...
Read more
US

Apple's iPhone 12 remains a mystery with the US firm continuing to stay tight-lipped about an official release date. However, with many expecting a...
Read more

Grace Huckins Conversations on the final day of this year’s WIRED25 event revolved around the existential mess that has characterized 2020: Covid-19, election integrity, California...
Read more

High blood pressure: The best and worst cheese for reducing your hypertension risk

When it comes to one’s diet, careful scrutiny is advised, and for cheese lovers this means even more careful planning. High...
Read more