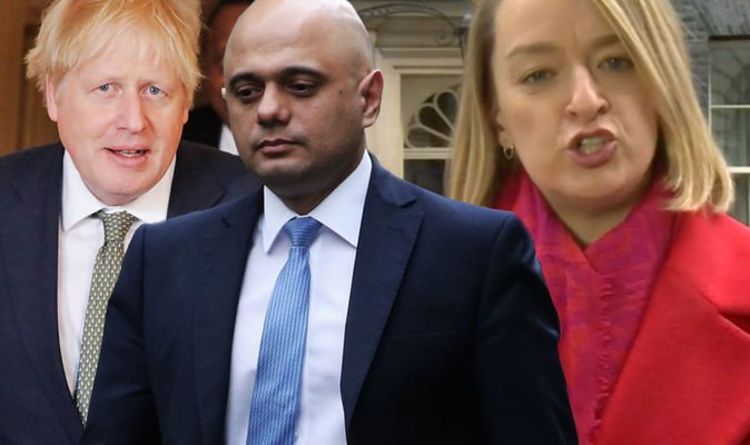 Laura Kuenssberg told BBC News viewers a Tory insider had described the now former Chancellor’s decision to resign “insane” as she discussed Sajid Javid’s move. The BBC editor warned the Tory MP who will now sit on the backbenches of Westminster could become a “thorn in the Prime Minister’s side” going forward. She said: “This turn of events will really be quite shocking to some people. One Tory insider just texted me a couple of moments ago saying ‘this is insane’.

“Sajid Javid was stability in the Government and we’ll only know in the weeks and months to come whether Rishi Sunak is able to step up to the plate.

“He’s somebody that is very respected in Westminster but it’s a huge step up for him.

“And also, what kind of role will Sajid Javid play on the backbenches?

“Will he become, as people often do, a thorn in the Prime Minister’s side? Of course, with a parliamentary majority the size of Boris Johnson’s it’s not really the case that he’s in any way under threat.

READ MORE: Could Dominic Cummings follow pro-Brexit MPs out in wake of reshuffle?

“But he could do without critics. Let’s wait and see what Sajid Javid decides to do on the backbenches.

“Remember he wanted to be Prime Minister and ran for the leadership as well? So this is really setting the cat among the pigeons.

“It may well be the start of something rather than the end.”

The Prime Minister had been expected to keep Mr Javid in post and news of his resignation shocked Westminster.

Allies of the former chancellor said the Prime Minister had ordered him to fire all of his senior aides if he wanted to remain at the Treasury – something Mr Javid refused to do.

The bombshell came after long-standing rumours of tensions between the ex-chancellor and Mr Johnson’s closest aide Dominic Cummings.

In August he had fired Mr Javid’s aide Sonia Khan and it appears Number 10 wanted to go further in keeping a closer eye on the chancellor.

Mr Javid said that “no self-respecting minister” could accept the condition being imposed.

“He has turned down the job of Chancellor of the Exchequer,” a source close to Mr Javid said.