‘This is weird’: The Senate returns amid the pandemic 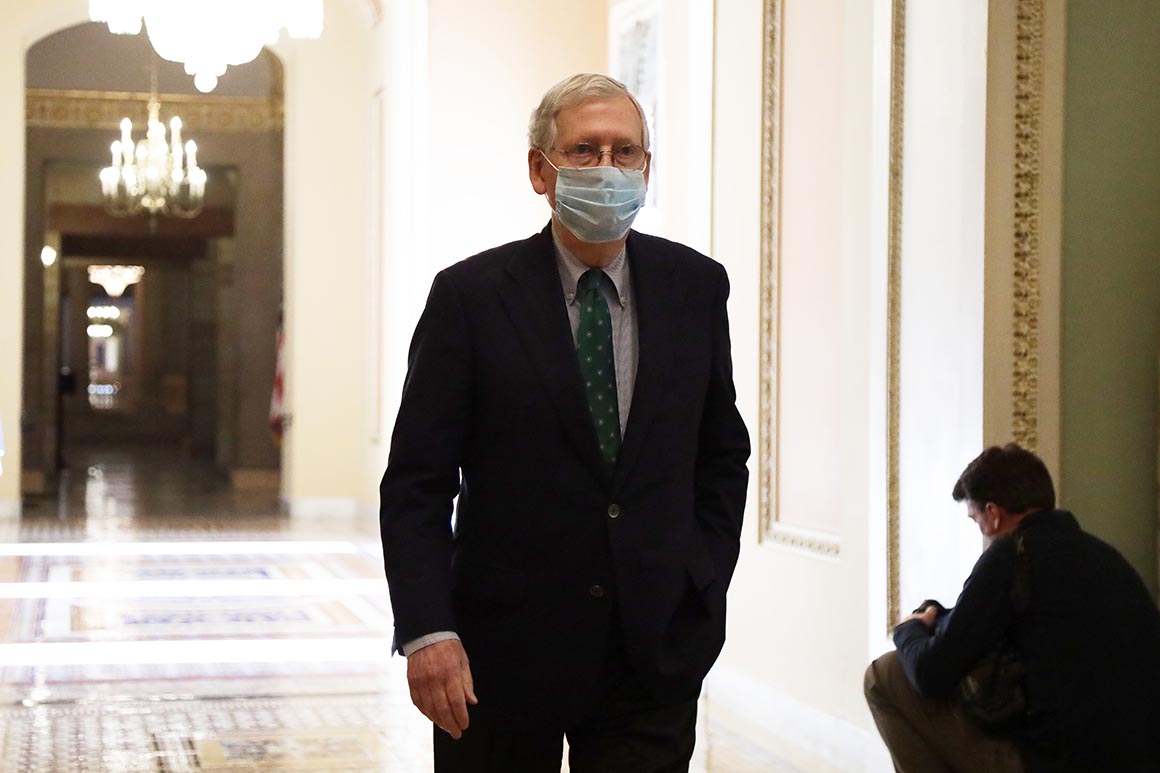 The Capitol is stirring to life after being hobbled for weeks by the coronavirus pandemic. But the halls are mostly empty, and the anxiety pulsing through the United States is reflected in the altered rhythms of Congress. Everyone is adjusting to a new normal.

On Monday evening, the Senate held its first roll-call vote since March 25. Thirteen senators didn’t even show up in an institution in which roughly half the members are 65 or older and are at heightened risk of the virus.

Sen. Chuck Grassley (R-Iowa), the second-oldest member of the Senate at 86, said through a navy mask that he’ll feel safe "as long as we follow [the doctor’s orders]." He drove in from Iowa for the week’s proceedings.

Senate Minority Whip Dick Durbin (D-Ill.), 75, said he contemplated not coming and then weighed whether to drive. After speaking to the Capitol’s physician, he decided to fly: The doctor said that was safer than a two-day drive from Illinois.

Still, Durbin is frustrated that one of the marquee events of Senate business this week is a nomination hearing for Senate Majority Leader Mitch McConnell’s judicial protege Justin Walker. Action on the next coronavirus relief measure is uncertain.

“I don’t think we should have come back. If we had something serious to do, Covid-19 4 or whatever, I’m here, that’s what I was elected to do,” Durbin said. “Coming back for Mitch McConnell’s former intern to be promoted to the second-highest court in the land doesn’t fit the description of a national emergency.”

After speaking to a trio of reporters wearing masks and practicing social distancing, Durbin said what everyone was thinking: “This is weird, isn’t it?”

The Senate is a social institution by nature, a group of 100 members who spend hours each month milling around on the Senate floor during votes. Monday evenings are known as a “bed check” vote when leaders in both parties can take the temperature of their members on the pressing issues of the day during a noncontroversial roll call.

But the coronavirus changed all that. Sure, the vote to confirm a new inspector general of the Nuclear Regulatory Commission was 87-0. But most senators voted with speed on Monday evening, casting their vote and then quickly walking off the floor without the usual back-patting and breeze-shooting.

“How ‘bout these Zooms?” Manchin said, referring to how politicians meet their constituents these days. “Isn’t that something?”

"I wear a mask when I go into grocery stores, that type of thing. I think around here, we probably won’t have to," Johnson said. "They’re not pleasant to wear, are they?"

But most senators, from McConnell on down, were wearing them anyway. Nearly every reporter and staffer did, too. Their muffled words ping-ponged around the empty Capitol eerily every few minutes. Mostly, the building was silent.

There were new plexiglass shields installed around the building, too, to try and prevent the spread of the virus and accommodate some business as usual. Boxes of masks were readily available as was hand sanitizer. And just like a Target or grocery store, there were visual cues reminding people where to stand to practice social distancing.

“It’s a different experience, for sure. But hopefully we’ll get used to it,” said Senate Majority Whip John Thune (R-S.D.).

And even in this new, strange world on Capitol Hill there were some echoes of the past. As soon as the Senate came in after its six-week hiatus, McConnell came to the floor to castigate Democratic “obstruction” of President Donald Trump’s nominees; Senate Minority Leader Chuck Schumer (D-N.Y.) hit back that if the Senate is going to be in session it should be to focus on fighting the coronavirus.

It was a partisan exchange that would have felt normal before anyone knew about the coronavirus. But after it ended, Schumer put on his mask and spoke to a handful of reporters who kept their distance as photographers loudly clicked their cameras at the chatty minority leader.

Asked how he was feeling, Schumer paused for a moment: “I’m doing my best. I’ve got to go about my job.”

“It’s important for the Senate to demonstrate that we can function. And we’re going to be guided by good advice,” said Sen. John Cornyn (R-Texas), who said he’d been tested for the virus twice when visiting the White House. “I’ve been under house arrest in my own home for six weeks, I was glad to get out.”

Sen. Tammy Duckworth (D-Ill.) retorted: “I don’t think it’s safe for anybody right now, and I think that we’re not setting a very good example.”

Hundreds of House members streamed into the Capitol last month to pass the latest coronavirus aid bill but they left town immediately after and dropped plans to return this week. The Senate forged ahead, even as the number of coronavirus cases rise in the region

Meanwhile, Speaker Nancy Pelosi and McConnell are refusing Trump’s offer for rapid coronavirus testing, a move seemingly intended to thwart criticism that the elite institution is receiving special treatment while much of the public lacks access to tests.

Schumer said he agreed with the decision. But not all of his members did.

“It’d be nice to have a test to find out if I’m going to infect my asthmatic son,” Sen. Jon Tester (D-Mont.) said. “That means we don’t have enough tests — regardless of what the president says.”

But there will be no rapid tests for now, so senators did their best to cope with the new conditions. Many rely on staffers to drive them to and from votes and other political events, though on Monday some drove themselves.

As they exited the building, they stopped for reporters while a balmy breeze drifted through the nation’s capital. They were back at work voting on nominees just like usual — except everything felt different.

"I think we’re all anxious," said Sen. Richard Shelby (R-Ala), who wore a University of Alabama-themed mask. “Just about everybody in the world has the same feeling we do. We want to survive.”

Andrew Desiderio contributed to this report.

amid, pandemic, returns, Senate, this, Weird