‘This is What I Want’: Why Trump Needs a Packed... 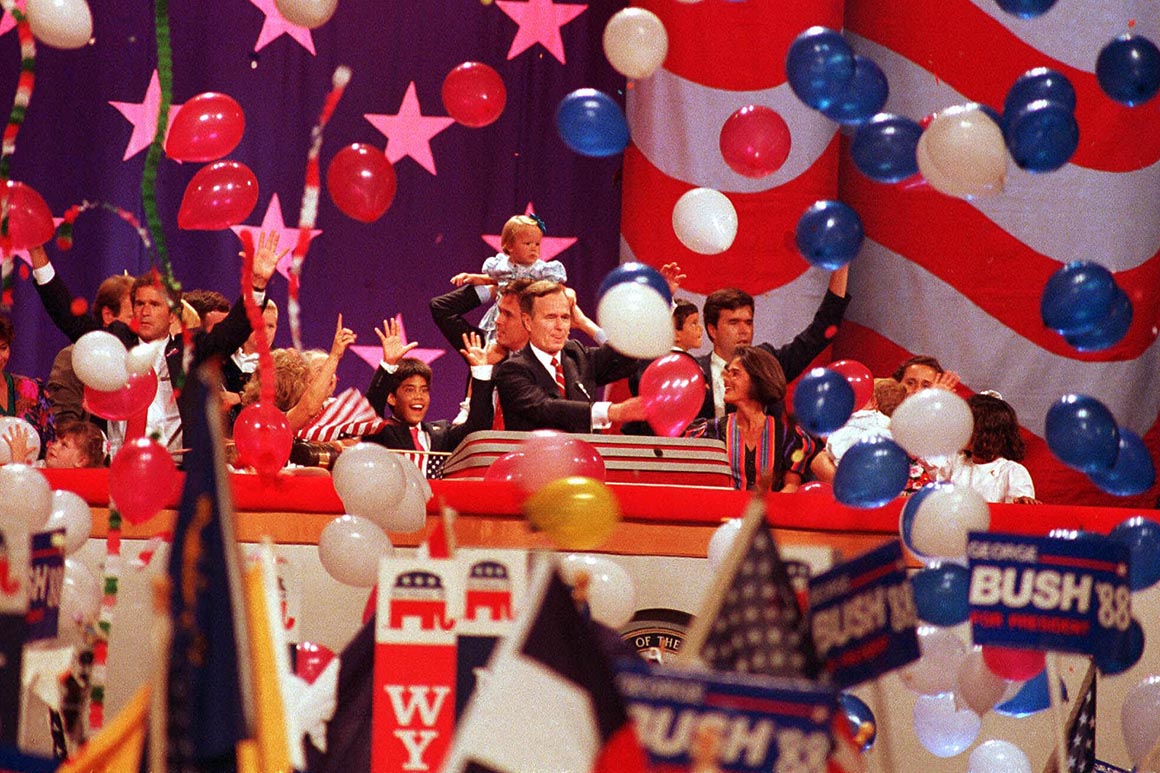 For all his norm-breaking, Trump adores old-fashioned pageantry. He has waxed enthusiastic about military parades and reveled in royal red-carpet treatment overseas. And little has captivated him as much as the lively quadrennial jamborees when a political party chooses its presidential candidate. Indeed, according to GOP operatives I spoke to who were with him 32 years ago at their party’s convention in New Orleans, the four-day crescendo of public affirmation is what piqued his interest in the presidency in the first place.

Roger Stone, Trump’s earliest and longest-running political adviser, had spearheaded that trip, ferrying the 42-year-old real estate developer and casino owner from event to event, setting up interviews with reporters, all in an attempt to stoke his interest in a prospective electoral bid. And on the last night of the extravaganza, August 18, 1988, Stone asked an associate to take Trump down to the floor of the Superdome to watch George H.W. Bush accept the nomination.

“My friend Laury—Laurance Gay—Laury got a call from Roger: ‘Hey, there’s a young business guy who wants to be on the floor,’” Republican strategist Alex Castellanos told me in 2018. “‘He wants to be there when the balloons drop, the confetti falls, the band strikes up. He wants to see all that.’”

“Roger was the lead on Trump,” said Gay, a lobbyist and longtime pal of Paul Manafort, referring to Trump’s relationship with the lobbying firm Black, Manafort & Stone, for which Gay was working. He had gotten to know Stone on Ronald Reagan’s campaign in 1980 in the Northeast before going on to work in the Department of Housing and Urban Development in the Reagan administration. This story has never been shared publicly.

“So we went down there, and the speeches were made,” Gay recalled, and Bush capped his remarks by placing his hand on his heart and reciting the Pledge of Allegiance, and then Barbara Bush joined him on the podium, and the rest of his family, and their families, and Dan Quayle, his pick for vice president, and his family, “and there’s 25 people out there, and with that, the band strikes up, the confetti starts to fall, the balloons are rising and falling,” 150,000 of them, red, white and blue, and there were 15-plus minutes of sustained, ecstatic sound.

And in the middle of this scene, Trump said something, not quite to Gay, who was immediately to his left, but loud enough for him to hear.

Trump’s history with political conventions is not long but it reveals a lot about the way he has used politics to get what he wants.

In 1980, along with Louise Sunshine, the Robin to his Batman in the nascent Trump Organization, Trump was a co-host of the Texas delegation during the Democratic National Convention in New York. Trump in that cycle gave money to Jimmy Carter, the incumbent Democrat, while also helping to raise money for Reagan, the challenging Republican. “Donald,” Sunshine once told me, “liked to be around all power.”

More than simply an affinity for proximity to power, he sought the power of a crowd to glean some for himself, from bringing big-time boxing matches and back-to-back WrestleManias to his casinos to staging his signature rallies starting in 2015—the roar of those crowds close, loud and directed at him. They weren’t just political events. They were personal celebrations.

In 2016 in Cleveland, of course, he became the Republican nominee, and that stage—his stage—featured the big bright white letters of his name bracketed by panels of gold and a backdrop of American flags, while his hour-and-15-minute-long remarks were defined by language that was dystopian and dark—“violence in our streets,” “chaos in our communities,” “damage and devastation.” But when he was finished, he was feted the way Bush had been feted; out came his wife and his family and the VP-to-be and his family, and up went the noise of the crowd, and down came the balloons, all that red, white and blue, and Trump pointed and made a face like an O. “That,” biographer Michael D’Antonio told me this week, “must have been an orgasmic moment for him.”

But it was 1988, in New Orleans, when he first felt the rush that big stage, national politics could give him.

Trump had given a speech the year before during primary season in New Hampshire, fueling speculation about his presidential ambition. He didn’t run, obviously, focusing mostly on hawking The Art of the Deal followed by a practically manic series of acquisitions. The Plaza Hotel. The Trump Shuttle. The 282-foot yacht with the solid gold sinks and the bulletproof sauna. He also, though, continued to up his political activity and profile.

In April of ’88, he hosted in the Plaza’s Grand Ballroom a fundraiser for then Vice President Bush. “BUSH,” said the dripping letters of a 3-foot-tall ice sculpture. “We’re here for a little talk from our next president,” Trump told the 500-strong throng. Privately, Trump proceeded to make an unsolicited suggestion to Bush’s staff that he could be a possible running mate. Campaign manager Lee Atwater was interested enough to call Trump back. He then floated the notion to Bush—who dismissed it as “strange and unbelievable.”

In May, Trump sent a letter to the man who had been his host for his visit to New Hampshire. “I just wanted to let you know that I have not forgotten your support or friendship,” Trump wrote, “and that shortly after the general election (or sooner if you think appropriate) which George Bush may unfortunately end up losing, I would like to meet with you to discuss some of your ideas.”

He was asked by a reporter from the Guardian a week and a half later if he wanted to run for president. “You could do it from where I am,” he responded.

In July, he traveled on his yacht down to Atlantic City. At his casino called the Castle, he was greeted by starstruck gawkers. “Be our president, Donald!” somebody shouted.

A month later, he flew to New Orleans.

Trump stayed at the Marriott, where Bush stayed, and was often spotted in the lobby. He situated himself in the restaurant, signing autographs, sipping sodas, meeting reporters.

“Me and Roger and Trump,” Bob McHugh, who covered New Jersey’s congressional delegation for The Associated Press at the time, said when we talked last month. “Unbeknownst to me, Roger had booked—I don’t know how many—but he had sort of booked a few people to come talk to Trump. So Trump was just going to sit there and reporters were going to come by, and the person that came when I was getting up to leave was Maureen Dowd.”

Was he ramping up to run for office?

“Everybody wants me to do it, everybody,” Trump told Dowd of the New York Times. “But I have no interest in doing it. My problem is that they always do polls and the polls are unbelievable. Everybody wants me. And the reason the polls come out this way is because they know if I were involved—which I don’t want to be and I won’t be—but if I were involved, we would not be ripped off. Nobody would rip this country off.”

“I’m looking at this as a vacation,” he told a different reporter from the AP. “I’m really here to watch.”

Over at the Superdome, though, he was the one being watched as well, doing an interview on CNN with Larry King. “I’m here because I’m a guest of Vice President Bush,” Trump said. “I won’t be running for president,” he added when King asked him about “the rumors” that he’d been thinking about it.

Others asked similar questions, and Trump’s answers weren’t always the same. “I think I’d have a very good chance,” he said to Chris Wallace of NBC News. “I mean, I like to win. When I do something, I like to win, I like to do well, and I think that I probably would have a pretty good chance.”

“Did you see the shows?” he eagerly asked a States News Service reporter. “Which was better?”

Stone was never far away.

“He was squiring Trump around the convention,” Michael Caputo said in the 2017 documentary “Get Me Roger Stone.” Caputo was an adviser to Trump in 2016 and as of late is a spokesman for the Department of Health and Human Services—but back then he was a Stone acolyte and an aspiring Republican consultant, and Stone asked him to help set up a room for an event. “And lo and behold, the guy who walked in was Donald Trump,” Caputo told me in 2018. “He wanted a closer look at the nominating process, and Roger’s job was to introduce him to as many influential Republicans as humanly possible in that crazy kind of an event and give him a pretty good primer on how these things roll.”

Anybody who knew Stone in the ’80s knew he saw great potential in Trump—“a prime piece of political horseflesh,” as he once put it—and this for Caputo came into vivid focus in New Orleans. “I got the definite impression,” he said, “that Roger Stone was preparing Donald Trump to run for president. I didn’t know when it would be—but it was very clear to me that he wasn’t there for the cocktails.”

The visceral climax of this effort happened that last night, in the hubbub of the bustling, sweaty Superdome.

“At that particular convention, in the very middle was a tower that was built, like two stories with black draping around it and the orchestra, the band, if you will, was on top and then there was some media on the first level that had a clear shot of the stage,” he continued. “And I had done a little advance the night before, and I thought that putting Mr. Trump right next to this tower just in front of it would give a clear vision of everything, using the tower as sort of a block for all the traffic going back and forth. It would probably be not a bad place to watch everything.”

Based on Trump’s reaction, he was right.

“Those were his exact words. I will never forget them. ‘This is what I want,’” Gay said. “And at that point, there was only one thing in mind that he could’ve wanted, which was to be president of the United States. I mean, he wanted to be up on that stage …”

“And since then,” said Castellanos, “this erratic, reckless, chaotic violator of every rule and norm has had the discipline to single-mindedly pursue this goal, wipe out two major political parties and become president of the United States. I think it’s a telling story.”

“I remember this like it was yesterday. He talked about the sheer immensity of it and how everybody seemed to come from the same belief system, and it had a very powerful impact on him,” an operative who was with Trump at the convention in ’88 told me this week. “Fast forward to 2020, and you can imagine where that might still linger.”