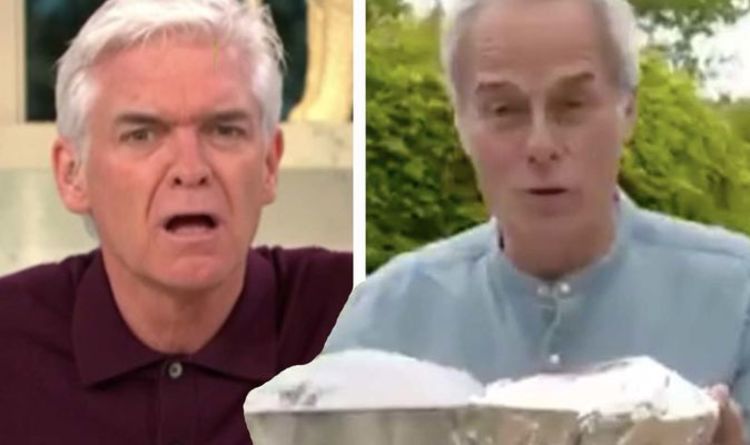 Holly Willoughby and Phillip Schofield invited a number of cooks onto This Morning today to help viewers who are locked down in their homes. But, when chef Phil Vickery, ordered a courier to deliver fried chicken to Holly and Phillip in their London studio, viewers were horrified.

Yesterday, leading chicken shop, KFC has announced their plans to expand its delivery services during the continuing coronavirus lockdown.

The fried chicken chain had already reopened 20 restaurants and says it will open another 80 next week.

Burger King and Pret A Manger have both opened the doors to some sites for delivery and takeaway in the past week while Greggs and McDonald’s are making moves to open some stores, too.

And in a homage to the fast-food restaurant coming back, This Morning decided to recreate their own fried chicken and got Phil Vickery on hand to help.

But those watching at home, following two other cookery segments whereby cookies were made and eggs perfectly boiled, some were confused as to why ITV needed to bike Phil’s chicken to the studio.

READ MORE: John Torode oblivious as kitchen ON FIRE on This Morning

Holly began by introducing what was coming up later on the show and one of those segments was chef Phil Vickery.

The host said: “Phil Vickey will be showing you how to make KFC’s fried chicken at home. Good Morning Phil.”

Phil was seen outside his house holding a package with a motorcyclist who was ready to deliver his freshly made fried chicken to Holly and Phil in London.

The chef lives in Buckinghamshire and said: “Good morning to you two. Listen, I’ve got your chicken here, it’s on a bike now so you’ll get it in about half an hour.

“No chips sadly because I didn’t have time,” but Holly interrupted.

She said: “Yeah, I know that delivery driver likes a bit of chicken so I wouldn’t be surprised if he doesn’t detour to his home.”

Phil chipped in again: “Holly there are eight pieces, just check when he gets there.”

However, those watching at home were not impressed by the idea of the courier making what they deemed a ‘non-essential journey’ during the coronavirus pandemic.

The UK is currently in its sixth week of lockdown since the Prime Minister announced the measure to slow the spread of the deadly disease and help the NHS.

UK residents are only meant to leave their homes if it is absolutely essential, and viewers of This Morning were left furious and took to Twitter to discuss.

A fourth added: “So we are told not to travel unnecessarily……but @ITV are sending a courier from Buckinghamshire to london….to deliver some fried chicken! F*** off with ya! #ThisMorning”