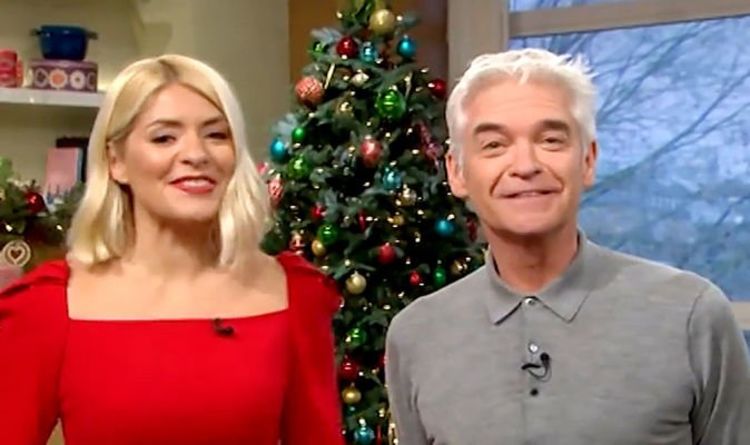 At one point Phillip, 57, could not resist a reference to the alleged war of words with their stand-ins Ruth Langsford, 59, and husband Eamonn Holmes, 60.

Holly, 38, said she was sad that she would not be on the show over the festive period, before joking: “I can stay!”

To which Phillip joked: “You could stay. Though Eamonn and Ruth would be very angry. They’ve planned their whole Christmas around this.”

Nodding in agreement, Holly replied: “I know. I know.”

Despite its light-hearted nature, the comments follow reports Ruth made a formal complaint about Phillip after he cut her off mid-air, raising suspicions that he was having a subtle dig.

Presenter Alison Hammond, 44, also joked on the show yesterday that Phillip was set to get fired in the new year, amid claims he can be difficult to work with. To raised eyebrows she said: “I’ll never see you again.”

It is believed that Ruth complained about Phillip after he interrupted her during a live link. In the clip from April, she appeared as the ITV show was finishing to let viewers know what was coming up in Loose Women later.

As she came to the end of the segment, Phillip interrupted and said: “Guys, we’re going to have to jump in there and stop you I’m afraid because we’re a bit tight for time at this end. Thank you, Ruth.”

Ruth, appearing unimpressed with Phillip’s interruption, replied: “Well I only had two more words to say,” and looked away from the camera.

Phillip did not seem to notice her reaction and carried on as normal.

The clip resurfaced this week after he had been accused of creating a “toxic atmosphere” for his co-stars, with allegations of spats.

Ruth and Eamonn host the show until Phillip and Holly return on January 6 at the new time of 10am.

Bybshilliday Halle Berry says that her boyfriend Van Hunt can vouch for how good she is in bed, after LisaRaye McCoy questioned the stunning actress’...
Read more