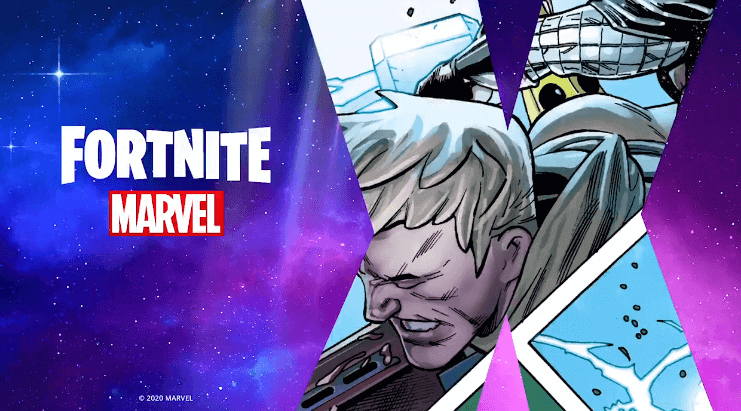 With just a few days to go until the launch of Season 4 on August 27, things are really starting to heat up.

A combination of teaser images, comic book pages and in-game events have Fortnite fans crafting all kinds of crazy theories about what is coming.

Epic have been regularly adding new pages to the comic book found in the in-game Battle Pass menu. The most recent of which show Thor fighting with a selection of Fortnite characters (including punching poor Peely in the face), before dropping his famous hammer “Mjolnir”, crushing the ground below.

This has also been reflected on the map itself. A small crater with Thor’s hammer in the centre has appeared in the area between Salty Springs and Flopper Pond.

As of now, players are unable to interact with the hammer. Some people predict that it will later become a mythic weapon. This wouldn’t be the first time we got to wield the power of Thor, last year his Stormbreaker axe was available in the Endgame LTM.

It is very possible that the land around this crater will become a new POI in Season 4. Fortnite leaker @HYPEX has already indicated that a Marvel/Thor themed location could be on the way, and this part of the map has plenty of open space.

The teaser images being uploaded to social media appear to be spelling out a word. So far we have the letters N-E-X. The final two teasers are expected to arrive at similar times on Tuesday and Wednesday, finishing the word NEXUS. This is defined as “an important connection between the parts of a system or a group of things”.

This is certainly shaping up to be an exciting season, with an old school Fortnite level of focus on the storyline.

Gamers trying to play Call of Duty Modern Warfare and COD Warzone tonight are reporting being kicked from games. This includes being prompted to download...
Read more

Brexit triumph: UK would have been 'second LARGEST contributor' to EU recovery fund

At the end of summer, EU leaders struck a deal on a huge coronavirus recovery package after four days of bitter talks. The €750billion...
Read more

The Democrat nominee for the 2020 US Presidential election appeared to misread the teleprompter during an interview. Mr Biden stated that he got to...
Read more

Strictly Come Dancing host Claudia Winkleman, 48, loves her job, and who wouldn't? Being at the very centre of one of Britain's most loved...
Read more