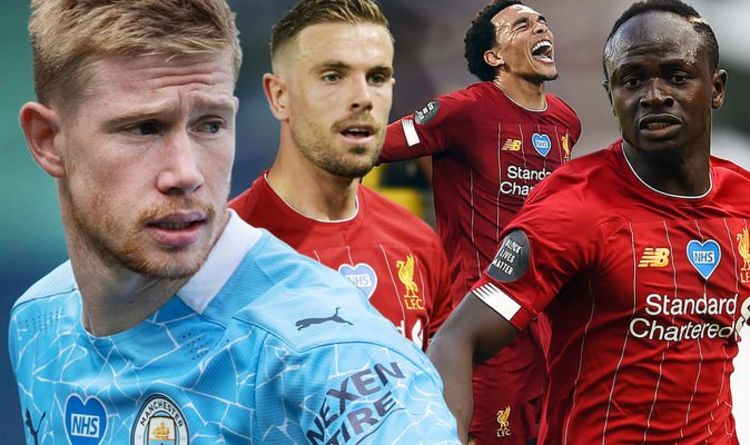 Liverpool trio Jordan Henderson, Sadio Mane and Trent Alexander-Arnold have all been named as nominees for the Premier League Player of the Year award, with Manchester City playmaker Kevin De Bruyne thought to be the strongest non-Liverpool candidate for the gong. But reigning Player of the Year Virgil van Dijk does not feature on the seven-man shortlist.

That means there are five Englishman among the seven finalists.

Not a single Manchester United or Chelsea player feature despite the the Red Devils and the Blues finishing third and fourth respectively, although six made the shortlist for the Young Player of the Year award.

Arsenal’s Pierre-Emerick Aubameyang is a curious absentee after mustering 22 goals in an underperforming Gunners team.

Right-back Alexander-Arnold is also nominated for the Young Player of the Year prize, which he is the favourite to win after a four-goal, 13-assist campaign.

But it is Liverpool captain Henderson, winner of the Football Writers’ Association Footballer of the Year, who is the favourite for the Player of the Year.

The midfielder skippered the Reds to their first league title since 1990 and contributed four goals and five assists as Jurgen Klopp’s side earned 99 points.

Nor is towering centre-back Van Dijk, who won the Premier League Player of the Year award in 2019 after Salah had claimed it in 2018.

Liverpool are looking to become the first team since Manchester United between 2007 and 2009 to have three successive winners, with Cristiano Ronaldo claiming the accolade in back-to-back years before Nemanja Vidic.

But the Red Devils’ joint-top scoring striker Marcus Rashford is left out despite a 17-goal campaign, as is Anthony Martial. Midfielder Bruno Fernandes would certainly have been a challenger had he played for United for the entirety of the season.

Instead, Leicester’s Vardy – who plundered 23 goals and added five assists – is included although the Foxes missed out on Champions League qualification due to a final-day defeat to United.

Still, Brendan Rodgers’ men mustered the second-best finish ever for the Midlands club in the Premier League.

Ings, who was one goal behind compatriot Vardy, is also a contender after enjoying the best goalscoring league season of his career to date with the Saints.

Burnley shot-stopper Pope is perhaps a surprise contender given that he was beaten to the Golden Glove award by City’s Ederson, but the England goalkeeper enjoyed a terrific campaign individually with 15 clean sheets and a string of impressive saves.

Sporting News When the Patriots got stuffed at the goal line down 35-30 with time expiring against the Seahawks on Sunday Night Football, not only...
Read more
Sports

Sporting News Seventeen-year-old Gio Reyna began his second competitive game of the season, having also started and found the net in the first round of...
Read more