Tiger King movie: Will Tiger King be made into a... 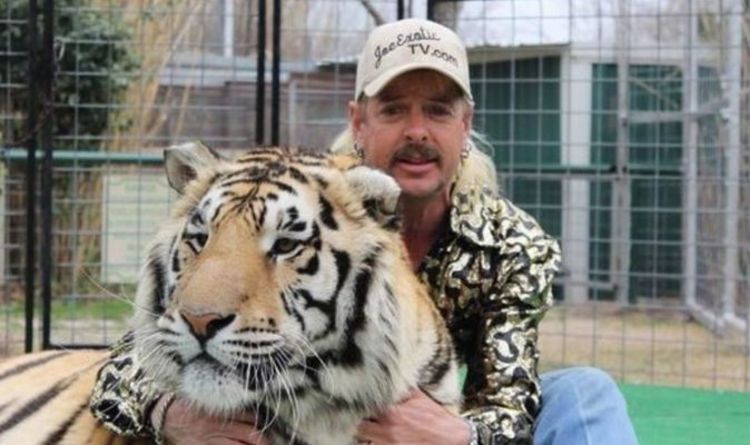 Deadline reported Ryan Murphy, the maker of Glee, is in talks to produce either a new series or a movie of the series.

There are no reports on whether it will definitely be a movie or another series as yet.

However, one name has been mooted of who may take on the main role: Hollywood hot-stuff Rob Lowe.

Teasing on Instagram, Lowe said: “Ryan Murphy and I will be developing our version of this insane story. Stay tuned!”

However, Exotic had an idea of who he would like to be in a movie about his life and sadly for Lowe, he was not in the shortlist.

Instead, funny man David Spade made the cut and, in an interview with Ellen DeGeneres, he spoke on whether he would be interested in taking on the role.

Asked about taking on the role, he said: “I don’t know. It depends. There’s [my talk] show and there’s getting time off and all that.

“Joe Exotic said me or Brad Pitt. I see Brad Pitt at auditions all the time and it’s always tense…

“But I think Joe is a little too squirrely for Brad that might be wishful thinking because Brad is so studly.”

Joe Exotic fancied Spade in the role due to the blond-mulleted janitor, Joe Dirt, who Spade portrayed in a 2001 movie, and its 2015 straight-to-video sequel Joe Dirt: Beautiful Loser.

Joe Exotic’s husband, Dillon Passage, has also been thinking about this question, and when asked by People magazine, said: “Zac Efron – I’ve been asked this question multiple times.

While Rob Lowe, Zac Efron and Brad Pitt may be names in the list to play a role in a Joe Exotic film, the bookies have placed David Spade as the most likely star.

Alex Apati of Ladbrokes said: “David Spade could be the perfect person to play Joe Exotic, and having already got the blessing from the man himself, there’s every chance he does just that on the big screen.”

Spade is currently sitting at 7/2 odds, meaning he could be the one to take on the role.

That project is likely to be based on the Over My Dead Body podcast, which chronicles the story from a different viewpoint to Tiger King.