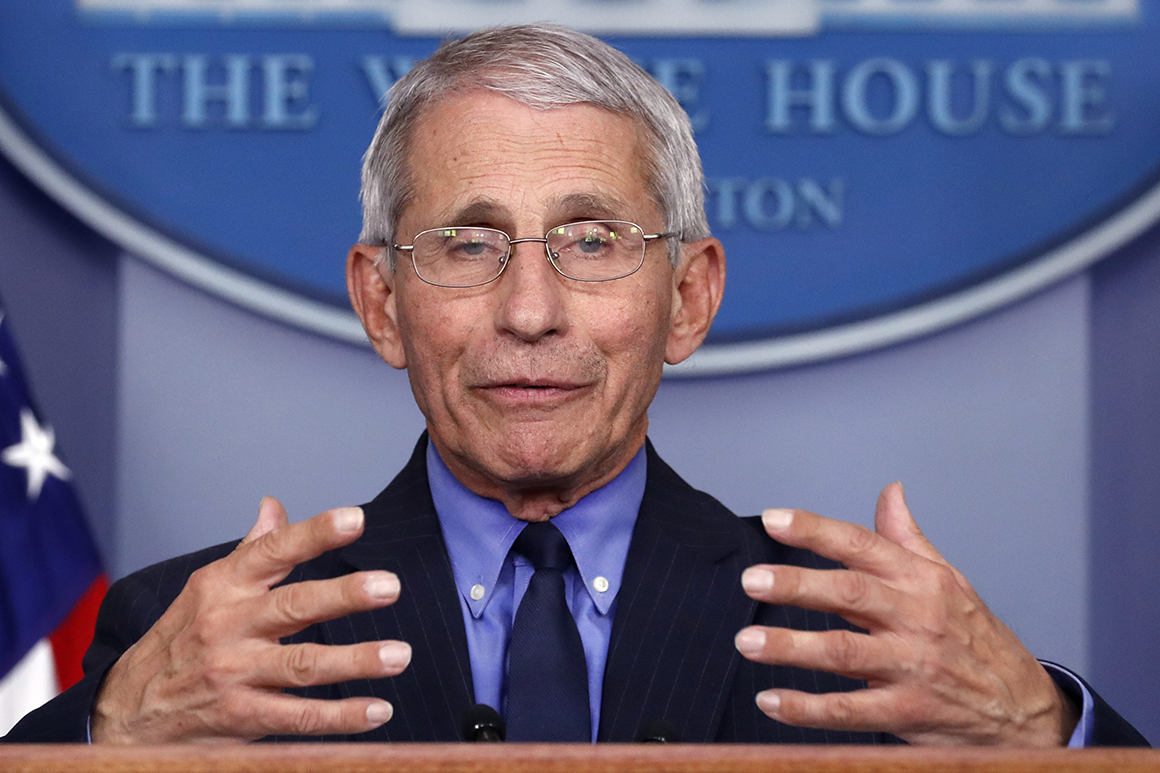 The president had just retweeted a call to #FireFauci, and activity on the @FauciFanClub Instagram account was spiking.

Donald Trump had given a presidential platform to a bellicose movement to oust Dr. Anthony Fauci, the government’s ubiquitous face of science and sober coronavirus warnings, and his detractors were coming out of the digital woodworks.

But so were the Fauci fanatics.

“I get things like ‘oh he’s a pawn of Trump’ or ‘out to destroy Trump’ … which must mean he’s doing an excellent job if even his haters are undecided about whether he wants to support or destroy Trump,” said Emily, the 32-year-old who created @FauciFanClub Instagram account and website that sells Fauci apparel, who asked that only her first name be used.

While much of the past week was focused on the Fauci haters, it also saw a resurgence of the fandom that has built up around the 79-year-old head of the National Institute of Allergy and Infectious Diseases over his ability to delicately dance around the president’s mercurial ways.

You can get Fauci’s face on almost any surface you can print on, from cakes and socks to bagged cocktails and sweaters. There are Fauci fan clubs on Facebook with tens of thousands of followers, petitions to designate him the “Sexiest Man Alive,” Fauci-loving Instagram pages. A quick search on Etsy reveals hundreds of products with the smiling doctor’s face. “Thank god the doctor is in,” reads a commemorative button.

“Here’s this guy center stage who seems to have no political agenda and has the best interest of the people at heart and he has this charismatic trustworthy thing about him. It seems really rare.”

She added: “Is there some way to nominate him for Time Man of the Year or the Nobel Prize?”

So at the same time that he has drawn the ire of those bucking the government’s social-distancing guidelines — protesters outside the Texas Capitol on Saturday were chanting “Fire Fauci” — the doctor has also sparked a cottage industry of funny and strange fan products.

TikTok, the popular video app that lets users edit together videos, images and music, has found a new star in the infectious disease expert.

Across the platform, there are 1.8 million views of content featuring his name. The most popular videos have spliced together photos of Fauci over the years — from official photos of his post at the National Institute of Allergy and Infectious Diseases, to black and white younger photos of him playing basketball and examining a beaker — set to songs like “What Makes You Beautiful,” by One Direction.

Capo, a Washington, D.C., deli and speakeasy, has been selling Fauci-themed cocktails for pickup and delivery.

The “Fauci-Pouchy,” a vodka mint concoction that features a drawing of Fauci on the front, goes for $ 14. According to Washigntonian, the deli’s beverage director Rohit Malhotra even offered the packaged cocktail to a neighbor who works at the National Institutes of Health and plans to share the cocktails at their next board meeting.

“This is the first time a nerd has become a rock star and a public icon at this level,” Malhotra told the magazine. “There’s a nerd culture in D.C. that’s embraced and loved, whether it’s politics or science or tech. But this has expanded beyond that.”

At the other end of the spectrum, inexpensive t-shirts can be found on Amazon and Etsy with slogans such as “Fauci Squad,” “I <3 Fauci” and “In Fauci We Trust.” A pop-up shop, Social Distancing, went viral for its $ 32 hats that say “FAUCCI,” in a nod to a similar style from Gucci. All the proceeds go to Meals on Wheels.

From donuts and cupcakes to pasta dishes, bakeries and restaurants across the country have given a nod to the country’s most famous immunologist with items on their menu.

Donuts Delite, a bakery in Rochester, N.Y., made donuts with an edible portrait of Fauci on top, surrounded by sprinkles. A Chicago bakery, Vanille Patisserie, has been selling out of the “Fauci stud muffin” A Melt-In Your Mouth, a bakery in North Carolina, created Fauci cupcakes and sold nearly 1,000 of them in three days, according to CNN.

On Long Island, Peter’s Clam Bar has been selling “Fauci Linguini” in celebration of Fauci’s Italian-American roots. “The linguini with white clam sauce shares origins with Fauci, as the sauce itself was invented in the Fauci Family’s native Sciacca, Italy,” the restaurant said in a press release. 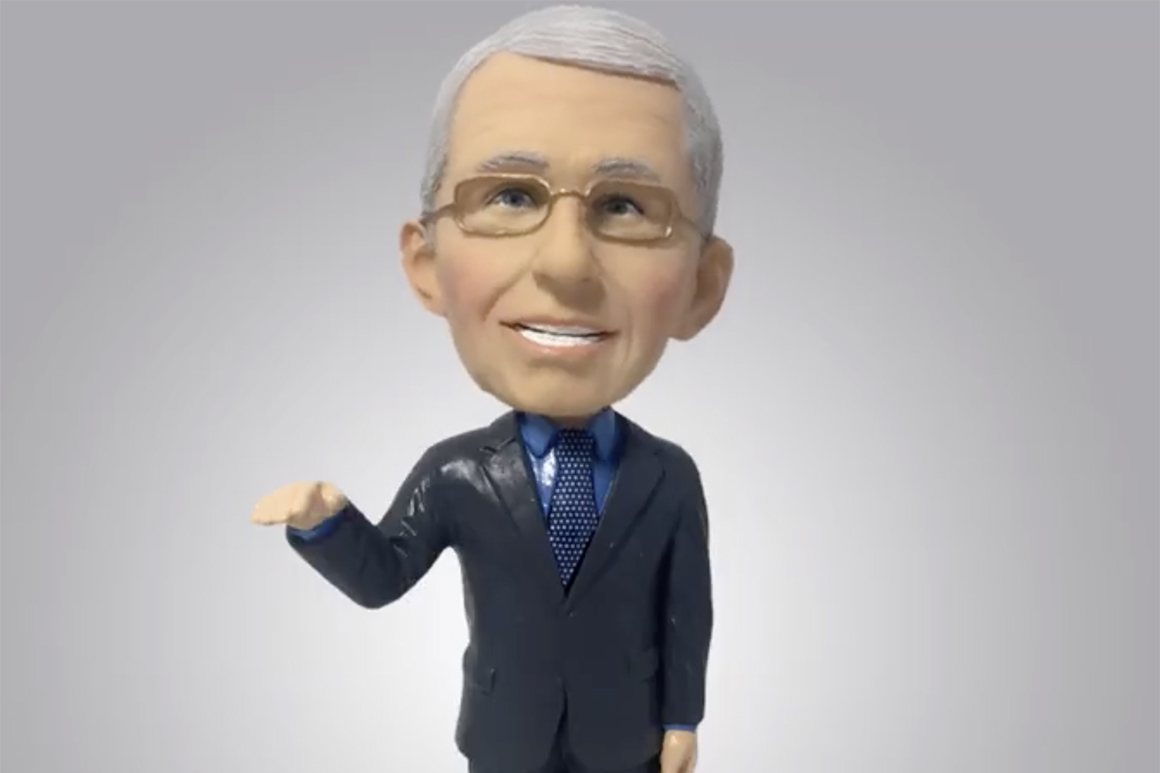 Fauci is getting his own custom bobblehead dolls made by Milwaukee’s National Bobblehead Hall of Fame and Museum.

“Dr. Anthony Fauci has become America’s voice of reason as one of the lead members of the White House Coronavirus Task Force,” the museum states on their website.

The bobbleheads have proved wildly popular, raising over $ 100,000 for the American Hospital Association’s “100 Million Mask Challenge,” which aims to marshall more resources to produce and distribute protective masks.

The museum is also making a bobblehead of Dr. Deborah Birx, a global health expert and the task force’s other prominent medical voice.