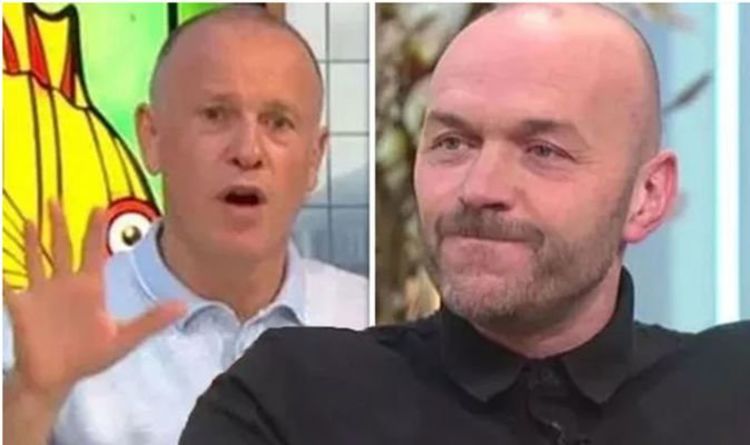 Sunday Brunch hosts Tim Lovejoy, 52, and Simon Rimmer, 56, weren’t together in the studio for the first time in the show’s history last week, as the pair hosted the Channel 4 show via video link at home. The conversation swiftly turned to what Tim would be doing once his “TV career comes to an end”.

As the presenting duo chatted, talk turned to home-schooling as Tim admitted he enjoyed teaching at home.

“I’ve been getting up and doing Joe Wicks’ workout and I’ve got to say he is a top man for doing that because it’s really good fun,” the Sunday Brunch host explained.

“Been doing it every morning and thoroughly enjoying it. “

Tim then moved the conversation on to teaching children at home and admitted it was a career he could see himself doing in the future.

Tim and Simon got onto the subject when a viewer named Darren sent in a question asking what hair products the former would recommend.

Reading out the query, Tim said: “What hair products would you recommend?

“Thanks, Darren,” he added sarcastically, while Simon burst into fits of giggles.

“The obvious question that, isn’t it?” The TV chef quipped.

Seeming less than impressed, Tim continued: “We don’t need that sort of humour, do we?

“It’s actually quite funny and why I think that’s funny is that every man gets to a certain age and their hair starts getting thinner, as you know, and then you end up panicking and going ‘Oh no, I’m losing my hair, what am I going to do now?’

“Now there’s the internet, there wasn’t the internet when you first lost your hair was there Simon?”

Fortunately, Simon laughed along with his co-host’s cheeky retort, as Tim continued: “If you Google it and search for celebrities who have lost their hair and how do I keep my hair going?

ByUs Weekly Staff A timeless beauty! Jennifer Lopez hasn’t aged a day in the past 20 years. J. Lo burst onto the scene as a Fly Girl...
Read more
Celebrity

ByJulia Teti Kelly Clarkson opened up on her talk show about what she’s grateful for and revealed the ‘learning curve’ she’s been on five months...
Read more
Celebrity

ByCelebrities are speaking out in support of Meghan Markle after the Duchess of Sussex revealed in a New York Times op-ed on Wednesday that...
Read more