To fight coronavirus, Trump and Pence lean into religion — in their own ways 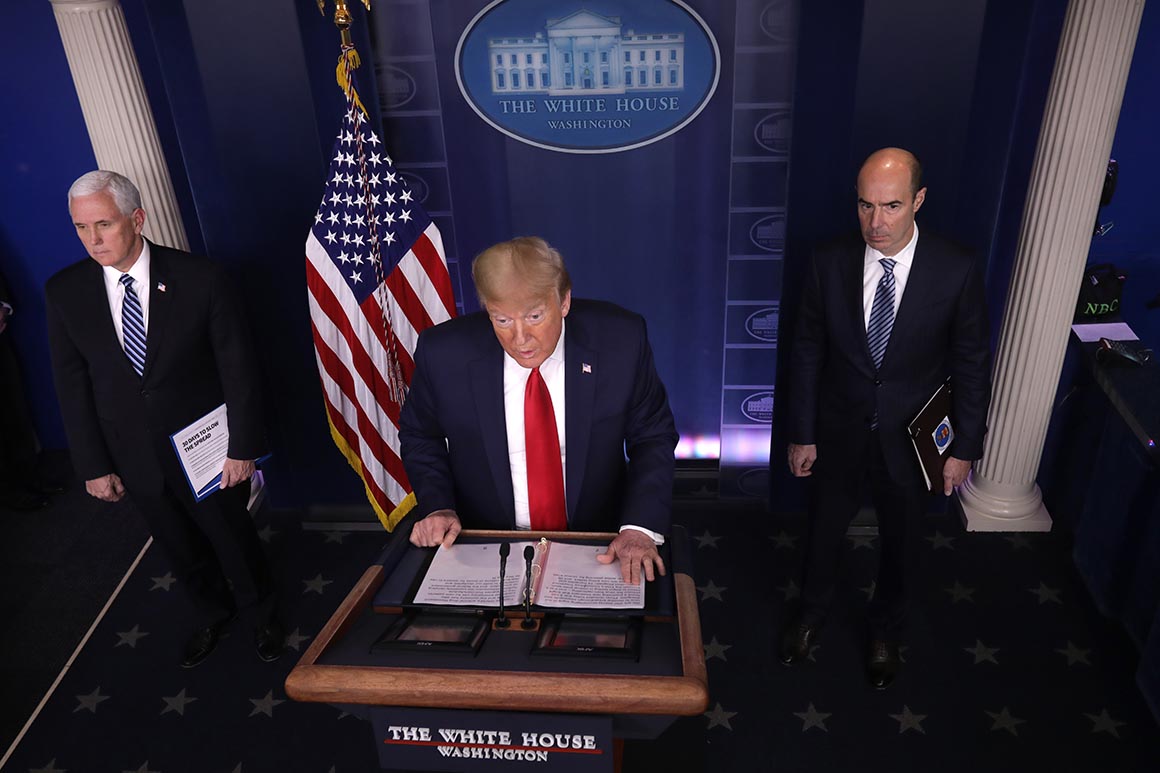 As the nation’s coronavirus death toll continues to climb, millions of religious Americans have been left to observe Holy Week in isolation: no Passover gatherings with relatives who flew in for the occasion, no “Alleluias” sung from church balconies over crowded pews below.

Some Christians will take Easter Communion at home, substituting communal chalices and altar bread with Dixie cups and homemade wafers. Some synagogues will offer curbside pickup, handing their congregants Seder meals while they remain in the safety of their cars. Even Vice President Mike Pence and his wife, Karen, both devout evangelicals, will celebrate Easter remotely — participating in a virtual worship service from their living room in Washington.

“The advantage is that we get to go to our home church in Indiana,” Pence said at a White House briefing this week, acknowledging that he — like so many others — has had to abandon traditions, adjust plans and acclimate to a new normal in the midst of the coronavirus pandemic.

Pence’s brief description of his own Easter weekend plans was a personalized version of the faith-filled message he and President Donald Trump are consistently delivering to the administration’s religious allies and the rest of the public throughout the coronavirus crisis. In private calls and televised daily briefings, they have made transcendent appeals for sacrifice and solidarity — invoking biblical values such as patience, generosity and care for the needy while imploring people to adhere to social-distancing guidelines that are meant to slow the virus’ spread and protect vulnerable populations.

“Every generation of Americans has been called to make sure it sacrifices for the good of the nation… Now, it’s our time. We must sacrifice together because we are all in this together,” Trump said during a White House briefing on March 18, three weeks before he assured Americans there will be “many Easters together in churches in the future.”

The intersection of prayer and politics in the U.S. has often been most apparent in the country’s deepest moments of crisis, when leaders employ religious rhetoric to ease feelings of instability and existential anxiety. In the immediate aftermath of Sept. 11, Bush leaned heavily on his own faith as he tried to make sense of the tragedy, telling Americans just three days after the terror attack that “God’s signs are not always the ones we look for,” but that the U.S. would persevere because its people “are generous and kind, resourceful and brave.” In his eulogy for victims of the Charleston church shooting in 2015, President Barack Obama unexpectedly delivered a personal rendition of the solemn hymn “Amazing Grace.”

Trump and Pence, who have vastly different religious backgrounds, are finding their own ways to call on a higher power for national solidarity.

In the lead-up to Holy Week, senior administration officials repeatedly took the president’s message of national sacrifice to pastors and religious organizations that are closely aligned with the White House, including some who ignored early warnings to avoid gatherings of 50 people or more. Afraid of the public relations fiasco that would ensue if some of Trump’s religious supporters reopened their churches on Easter Sunday — a date Trump had mentioned last month as his target for an economic revival — the vice president and his team organized conference calls with outside allies to stress the importance of social-distancing measures.

“I’ve been privy firsthand to what the White House and this president are doing, and he is very serious about protecting Americans and slowing the spread,” said Mark Burns, a South Carolina pastor who participated in one of those calls.

On Good Friday, Trump is expected to issue a prayer proclamation from the Oval Office. He will be joined by Bishop Harry Jackson, a Pentecostal preacher from Maryland, and together they will participate in a televised blessing while stressing the need for physical distancing over Easter weekend once more, according to two people familiar with the plan.

Trump previously expressed interest in reopening parts of the U.S. economy by Easter, but backed away from the idea after top health officials warned him of the catastrophic conditions that could unfold if Americans returned to work without sufficient testing, and after several polls found that most voters disagreed with his proposed timeline.

In some cases, the efforts undertaken by Trump to maintain his deep bond with conservative evangelicals — the religious demographic from which he draws the most support — have been overshadowed by the actions of some evangelical leaders themselves.

For instance, the president’s decision to designate one Sunday in mid-March a National Day of Prayer “for all people who have been affected by the coronavirus pandemic” was quickly replaced in the news cycle by the reopening of Liberty University, an evangelical college run by Jerry Falwell Jr., son of the late televangelist, who is close to the president and his campaign.

In another instance, Trump invited MyPillow CEO Mike Lindell to the White House for a briefing focused on private sector assistance to combat the coronavirus pandemic, but when the time came for Lindell to speak he spent most of his remarks claiming Trump was divinely appointed and telling Americans to read the Bible while self-quarantining.

Other evangelical figures, such as Pennsylvania-based televangelist Jonathan Shuttlesworth, have made headlines for promising to host large, in-person worship services on Easter Sunday — something health officials have sternly and repeatedly warned against.

In other public appearances, Trump has invoked faith when talking about the general welfare of Americans and the importance of optimism in difficult times. Speaking from the White House on Palm Sunday, Trump encouraged families and individuals who are spending more time at home to “turn to reflection and prayer” and “pray for the heroic doctors and nurses, for the truck drivers and grocery store workers, and for everyone fighting this battle.”

“I see people from apartment houses screaming and shouting and singing their praises. It’s an incredible thing. … With the faith of our families and the spirit of our people and the grace of our God, we will endure, we will overcome, we will prevail,” he said, using language reminiscent of President George W. Bush’s speech at Washington’s National Cathedral after Sept. 11.

Trump was widely perceived as the least religious of his crowded GOP primary field in 2016. But his pivot to religious rhetoric as the country battles a dire economic crisis and public health emergency is rooted in historical precedent. The difference, though, is his delivery. Between his prayer requests and discussions of national sacrifice, Trump has suggested that federal assistance to states is contingent on how “appreciative” governors are of him and he has refused to follow his own administration’s health recommendations. After unveiling new CDC guidelines encouraging all Americans to wear face masks, for example, the president on Saturday said he would not be wearing a mask.

“It’s a recommendation, they recommend it. I just don’t want to wear one myself,” Trump said, days before his wife shared a photo of herself in a surgical mask.

The actions of officials inside Trump’s orbit have also raised questions about the sincerity of his administration’s religious appeals. The same day Treasury Secretary Steven Mnuchin warned the country that coronavirus could push the unemployment rate to 20 percent, White House spiritual adviser Paula White published a video of herself asking people to “sow a $ 91 seed” to her church during what was supposed to be a coronavirus-related prayer session.

White, whom several Trump officials regard as an unapologetic opportunist, never said whether the contributions would go toward helping those impacted by the global pandemic.