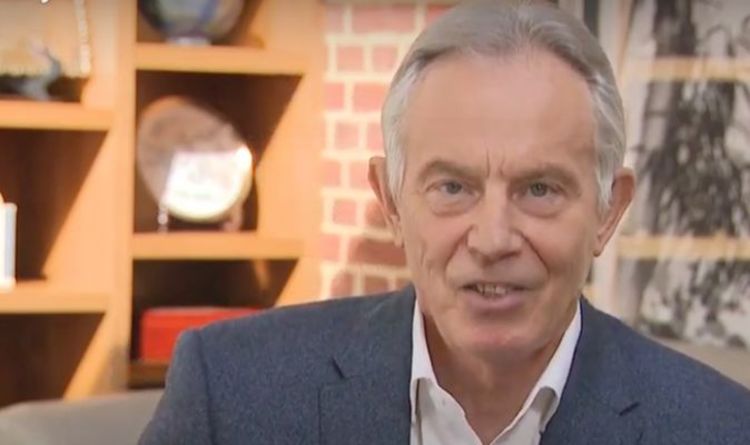 Tony Blair was asked whether it would be “fair” for Boris Johnson to face a public inquiry on his conduct during the coronavirus pandemic as he did in the aftermath of the War in Iraq. Sky News host Adam Boulton questioned the former Prime Minister as he discussed his proposals to end the lockdown Mr Johnson declared to slow down the pandemic. Mr Boulton said: “I want to ask you about responsibility.

“You, of course, with the whole post-9/11 and Iraq War, were held accountable and there was a public investigation.

The British Government confirmed on Sunday a shipment of 40,000 additional personal protective equipment (PPE) expected to arrive from Turkey on Sunday had been delayed and would only arrive on Monday evening at the earliest.

JUST IN: Captain Tom leaves GMB viewers ‘in tears’ as he addresses calls to be knighted

“And that will happen, by the way, whether I think it should happen or not. But I just think it’s important right now…it shouldn’t be the focus of our attention.

“The focus of our attention should be to make sure that the next phase of this happens in the best way possible.”

But despite his conciliatory tones, the appearance of Mr Blair on the programme sparked fury among social media users.

READ MORE: Jenny Harries hits back at BBC in press briefing ‘Let’s have an adult conversation’

Jeremy Corbyn SAVAGED on BBC Question Time over anti-Semitism – ‘Decision to ignore it!’

ByIt had estimated 85,000 deaths from Covid over the course of winter.
Read more
U.K.

ByMs Greer, author and writer for The New European, was featured on last night’s episode of Question Time and hit out at Labour following...
Read more
U.K.

The remark was made by Nick Thomas-Symonds, the shadow home secretary, during an appearance on the BBC’s Question Time show. On Thursday the Equalities...
Read more
U.K.

ByFormer BBC executive Richard Sambrook outlined a new set of rules for BBC staff in a bid to “ensure the highest possible standards of...
Read more