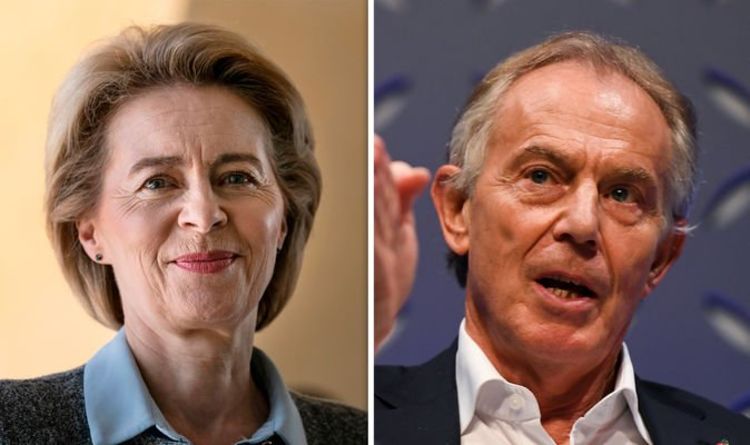 With Brexit Day in just two days, Leavers are set to celebrate the UK regaining sovereignty that has ebbed away to Brussels over the past few decades. Mr Blair, though, is among Britain’s mourning Remainers – branding it “tragic” that Brexit is now inevitable in an interview with CNN last month. However, the former Prime Minister made eerily similar points to top Brexiteers like Boris Johnson and Nigel Farage when discussing the European Economic Community (EEC) – the precursor to the EU – in the Eighties.

Leaving the EEC was the official Labour Party line in the early Eighties, which in part contributed to the ‘Gang of Four’ splitting to form the Social Democratic Party (SDP).

Mr Blair, however, not only stayed with the officially Eurosceptic party, he actively campaigned on that platform.

He first ran for Parliament in a 1982 by-election – which he lost – and in a local newspaper during that campaign, he declared that he supported the leadership on important matters including “withdrawal from the EEC (certainly unless the most fundamental changes are affected)”.

What’s more, in his election leaflet he asserted that the EEC “takes away Britain’s freedom to follow the economic policies we need” and blasted the “indefensible” agricultural policy of the bloc.

While many of Mr Blair’s pro-EEC colleagues simply stayed quiet on the matter to tow the party line, he actively voiced concerns echoed by Brexiteers today.

For example, Mr Farage urged Britons to vote Leave in the EU referendum by pointing out that the UK is a net giver to the central EU funds and that Westminster is bound by EU laws, reflecting the UK’s inability to control its own economic policies.

Mr Johnson has argued that Brexit will enable the UK to “take back control of our money, our borders, our laws” and to make free trade agreements with the rest of the world.

Mr Blair was first elected to Parliament in 1983 as MP for Sedgefield and, during that campaign, he fully supported Labour’s manifesto, famously dubbed the “longest suicide note in history”.

Later on in the Eighties, Mr Blair openly opposed the UK joining the Exchange Rate Mechanism (ERM), the precursor to the single currency.

The UK eventually did join the ERM in 1990 only to crash out disastrously two years later on Black Wednesday.

Mr Blair even appeared to predict this chaos, as he argued that entering the ERM essentially tethered the pound to the Deutschmark, potentially messing up the British economy.

The then-backbencher warned the House of Commons in 1986 that it is “important that our choice is informed and not a careless embrace of anything with the world ‘European’ in it”.

However, Mr Blair has done a complete U-turn in recent years.

In a move that political commentator Philip Johnston has branded “opportunistic”, Mr Blair has apparently switched from not even wanting to be in the trading bloc that was the EEC, to wanting to stay in the political union of the EU.

By 1989, he supported the UK joining the ERM and as Prime Minister from 1997-2007 he would lead the UK into establishing even closer ties with Europe.

It was Mr Blair that attempted to ratify the EU constitution that ended up being rejected by France and the Netherlands.