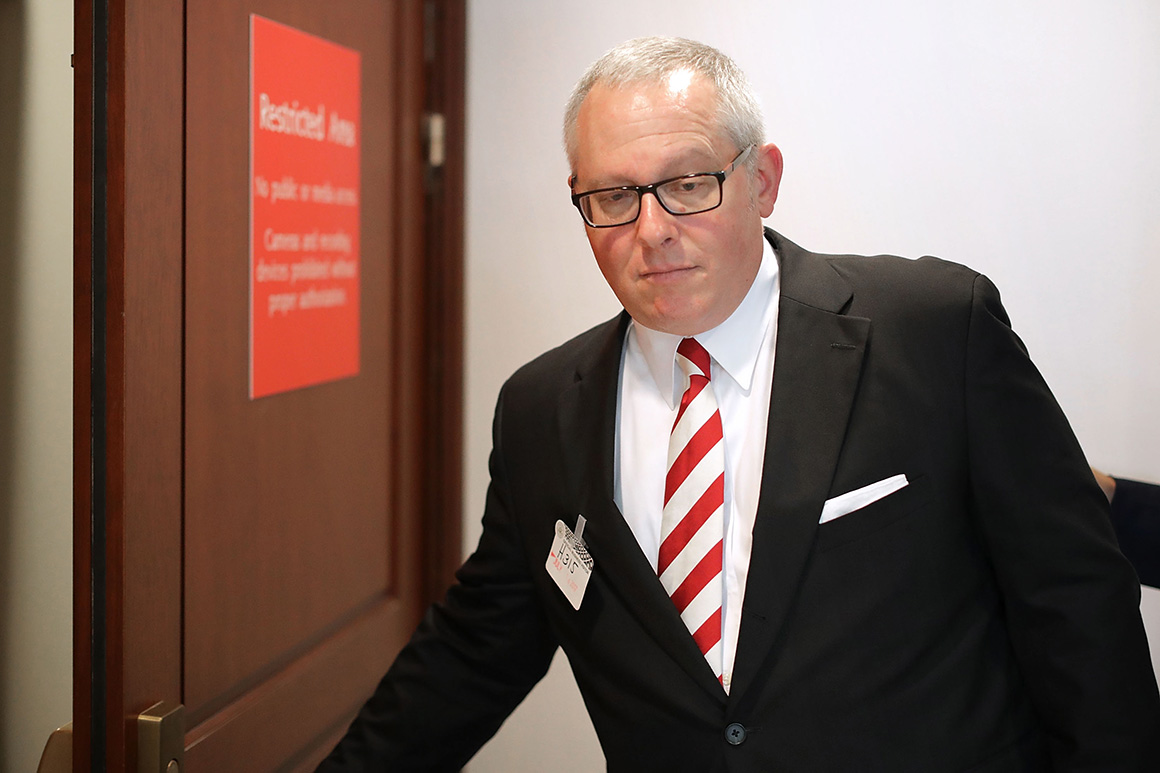 Caputo, who on Tuesday apologized to HHS staff for his remarks, confirmed to POLITICO that he is taking medical leave. In a statement released Wednesday afternoon, he said the leave would allow him “to pursue necessary screenings for a lymphatic issue discovered last week.”

Caputo added that he had put off seeing a doctor about the issue for months. “This was a mistake, and contributed to my stress level, along with the increasing number of violent threats leveled at me and my family back in Buffalo,” he said. “But every American battling COVID — in every city in every state across the nation — has been under enormous pressure. I am just one of them.”

Ryan Murphy will take over as the department’s acting assistant secretary for public affairs in the meantime, a role that he had filled prior to Caputo’s arrival in mid-April.

The move caps a turbulent past week for HHS, marked by a series of revelations about Caputo’s politically motivated attempts to meddle with the activities of its public health agencies, and his unfounded allegations on Facebook that the Centers for Disease Control and Prevention was harboring a “resistance unit” devoted to undermining President Donald Trump’s bid for reelection.

The departure of Caputo, a longtime Trump loyalist who has closely controlled HHS’ messaging on the pandemic response, could also further set back the administration’s efforts to promote its work toward a possible vaccine in the run-up to Election Day.

It’s also unclear whether Caputo will return after his 60-day medical leave, which would conclude in mid-November, two officials said. The White House declined to say on Wednesday whether Trump still had full confidence in him, with spokesperson Kayleigh McEnany telling reporters that she didn’t plan to address “personnel matters.”

The 58-year-old Caputo had been leading a $ 250 million planned publicity campaign designed to “inspire hope” about the coronavirus, a massive project awarded earlier this month to Virginia-based market research firm Fors Marsh Group.

The White House initially installed Caputo atop the HHS communications office in mid-April, amid unhappiness with Secretary Alex Azar and a desire to keep closer tabs on the department during its early efforts to combat Covid-19.

But Caputo quickly gained a reputation as a combative and erratic operative, brawling often with media outlets and courting near-constant controversy.

Within days of joining HHS, he faced a wave of calls for his resignation over a series of now-deleted tweets where he made derogatory comments about Chinese people, attacked political rivals and accused Democrats of rooting for “massive deaths” and an economic meltdown as a result of the coronavirus.

More recently, Caputo and top adviser Alexander had tried to interfere with the CDC’s Morbidity and Mortality Weekly Reports related to the coronavirus — scientific bulletins seen as a cornerstone of the agency’s public health work, POLITICO first reported.

Alexander had also also pressured top infectious disease expert Anthony Fauci to downplay the virus’ risk to children. And at the Food and Drug Administration, Caputo clashed with career officials after appointing another ally, John “Wolf” Wagner,” to lead the agency’s communications.

In his Facebook video over the weekend, Caputo alleged without evidence that “there are scientists who work for this government who do not want America to get well, not until after Joe Biden is president.” He also warned of an armed insurrection after the election, suggested he was personally in danger and asserted that his “mental health has definitely failed.”

The video prompted people both inside and outside the administration to urge Azar and the White House to address the issue, along with criticism from high-profile Democrats. Senate Minority Leader Chuck Schumer who called for Azar’s resignation and blamed him for losing control of the department.

In an emergency staff meeting on Tuesday, Caputo apologized for his remarks and acknowledged that they drew negative attention to the administration’s health care strategy. He blamed his behavior on physical health issues and unspecified threats against his family.

Caputo also spoke with Azar about his future later that day. But Azar during an appearance on Tuesday declined to condemn the comments made by Caputo, who has often boasted that his only focus is to defend Trump and that he’s retained the president’s full support throughout his tenure at HHS.

“Obviously some of those statements are concerning,” Azar told The Tennessean. “Michael Caputo has been a valued member of our coronavirus response but I’m not otherwise going to get into that.”

Following POLITICO’s Friday night report, Caputo spent the weekend sparring with critics and defiant of their calls to resign or fire his adviser for meddling with government scientists.

“What they’ve done, by coming after [Alexander], is made him permanent,” Caputo said in his Facebook video on Sunday. “I’m not letting Paul Alexander go.”

“I’m not going anywhere,” Caputo added. “You know why? Because the president of the United States supports me.”