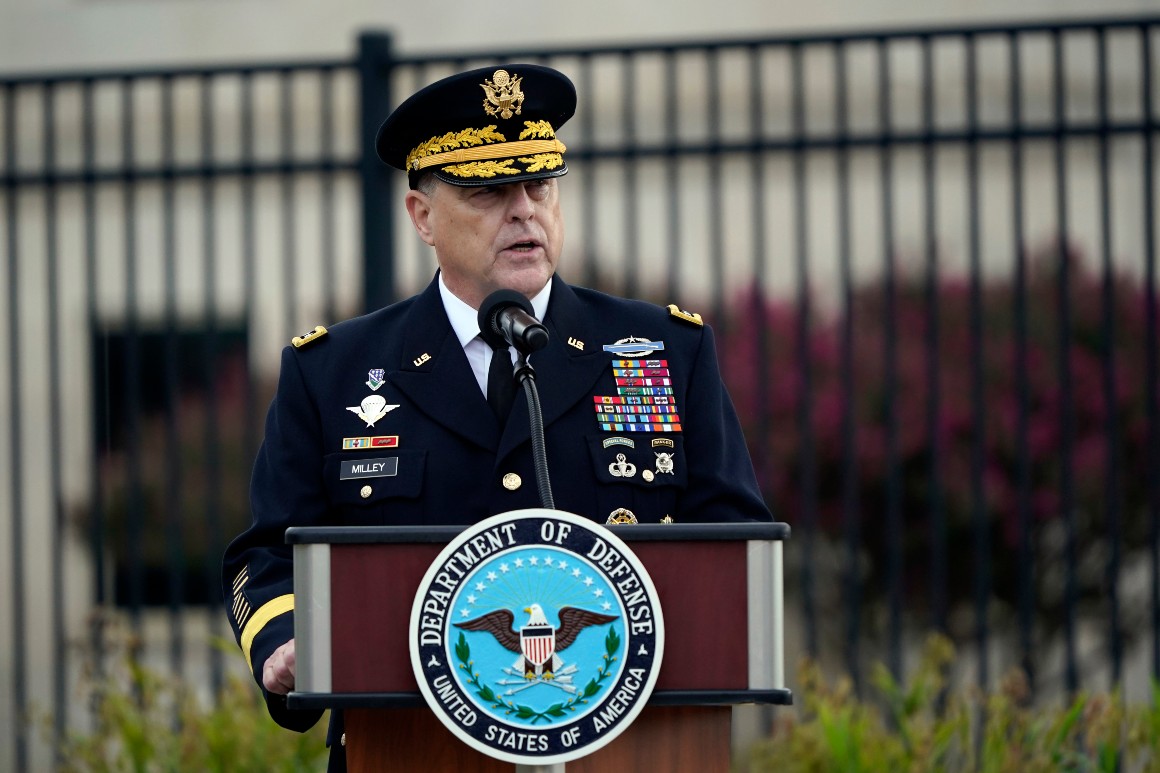 Not all of the military’s leaders are under quarantine. Marine Commandant Gen. David Berger, Defense Secretary Mark Esper and Navy Secretary Kenneth Braithwaite were traveling last week and did not attend the Pentagon meetings with Ray.

Coast Guard Commandant Adm. Karl Schultz has also been on travel and has not been in contact with Ray, spokesperson Jay Guyer said.

Beyond the Joint Chiefs, other leaders who took part in the meetings and are under self-quarantine include U.S. Cyber Command chief Gen. Paul Nakasone and Gen. Gary Thomas, assistant Marine Corps commandant, a third defense official said.

Milley and Vice Chairman Gen. John Hyten get tested “on a regular basis” for Covid-19, the first defense official said, adding that the length of military leaders’ quarantine period will be “conditions-based.”

“Anybody we know on the Joint Staff who was in contact with Adm. Ray has been tested and is observing CDC protocol,” the official said.

All of the Joint Chiefs have the ability to do their jobs from wherever they are working, the official said.

“There is no change to the operational readiness or mission capability of the U.S. Armed Forces,” Hoffman said. “Senior military leaders are able to remain fully mission capable and perform their duties from an alternative work location.”

“Our adversaries are always looking for any weakness to exploit,” Smith said. “President Trump’s pathetic attempts to exude strength aren’t fooling anyone — Americans know he is weak and so do those who wish us harm.”

In May, Gen. Joseph Lengyel, then the head of the National Guard, tested positive when visiting the White House, although a subsequent test showed he was negative.

That same week, Chief of Naval Operations Adm. Mike Gilday self-quarantined after coming into contact with a family member who had tested positive.

ByBurgess Everett Some of Pence’s aides have tested positive for the coronavirus recently but Pence has been cleared by doctors to travel as essential personnel. Even...
Read more
US

ByThe former Democratic leader of the Senate, Harry Reid, is meanwhile pressing Mr Biden, if Democrats are victorious next week, to go for the...
Read more
US

ByCaitlin Oprysko Her nomination has been bookended by coronavirus outbreaks within the Trump administration. At the first, which many have linked to Trump’s Sept. 26...
Read more
US

Senate poised to confirm Barrett to the Supreme Court

ByAndrew Desiderio The Senate is expected to vote around 7:30 p.m., after an overnight session that will have lasted more than 30 hours. Once Barrett...
Read more
US

ByWhile there have previously been signs of water on the lunar surface, these new discoveries suggest it is more abundant than previously thought. "It...
Read more