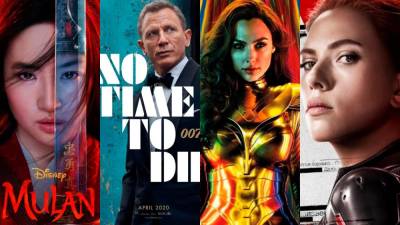 The COVID-19 pandemic has turned the world upside down, and not even Hollywood is immune as studios are scrambling to delay the release of their blockbuster movies. theSundaily takes a look at the most anticipated movies of 2020, and when we can expect to see these movies on the big screen.

The live-action adaptation of Mulan was slated for release in late March, but Disney decided to push it back. The postponement, however, came late enough that some lucky people had already seen the film at special preview screenings.

Walt Disney Studios has since issued a press release stating that it was pausing production on other live-action films.

James Bond: No Time to Die

It looks like Daniel Craig will have to wait a little longer to hang up his 007 tuxedo for good. The producers of No Time to Die were rightfully concerned about theatre closures due to the coronavirus outbreak affecting box office receipts and announced that the film will only be released in November.

After the success of 2017’s Wonder Woman, fans around the world were eagerly awaiting the sequel. Warner Bros was said to be keen on keeping to the original release date, but was inevitably compelled to delay the film.

However, fans of Gal Gadot can rejoice in the fact that the studio is committed to have Wonder Woman 1984 hit theatres in August.

Scarlett Johansson’s Black Widow set in the Marvel Cinematic Universe (MCU) has been pushed back from its Labour Day weekend release to Nov 6. Disney and Marvel took their time with the announcement as they had to rework the release schedule for the entire MCU.

Production and release dates for the next Black Panther, Thor, Captain Marvel and Doctor Strange movies have also been pushed back.