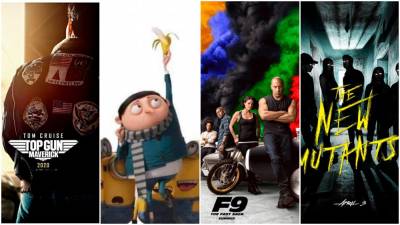 We continue with Part 2 of our list of the film releases delayed by the COVID-19 pandemic.

Tom Cruise reprises his role as Lt. Pete ‘Maverick’ Mitchell in this high-flying sequel to the iconic action film that nobody asked for. The original Top Gun was released in 1986 so what’s a few more months, right?

Minions: The Rise of Gru

Set to be released in the US on July 3, this animated sequel to the laugh-a-minute Minions movie is postponed indefinitely as Universal Pictures is adopting a wait-and-see attitude in light of the pandemic.

F9 (The Fast and the Furious)

Fans will have to wait a long to catch the next installment of the Fast and the Furious saga. F9 starring Vin Diesel, John ‘You can’t see me’ Cena and Charlize Theron was due to open in May as part of the summer blockbuster season but has been pushed back to April 2021, a date previously earmarked for the next film in the Fast Saga.

There’s no word yet on when the 10th and final film will be released.

This X-Men spinoff from 20th Century Studios and Marvel was plagued by production delays from the word go and has now been postponed indefinitely. This will hopefully be the last postponement of this Maisie Williams (Game of Thrones) and Anya Taylor-Joy (The Witch, Split) offering.