Top takeaways from Tuesday’s primaries: The left, the right, the wait 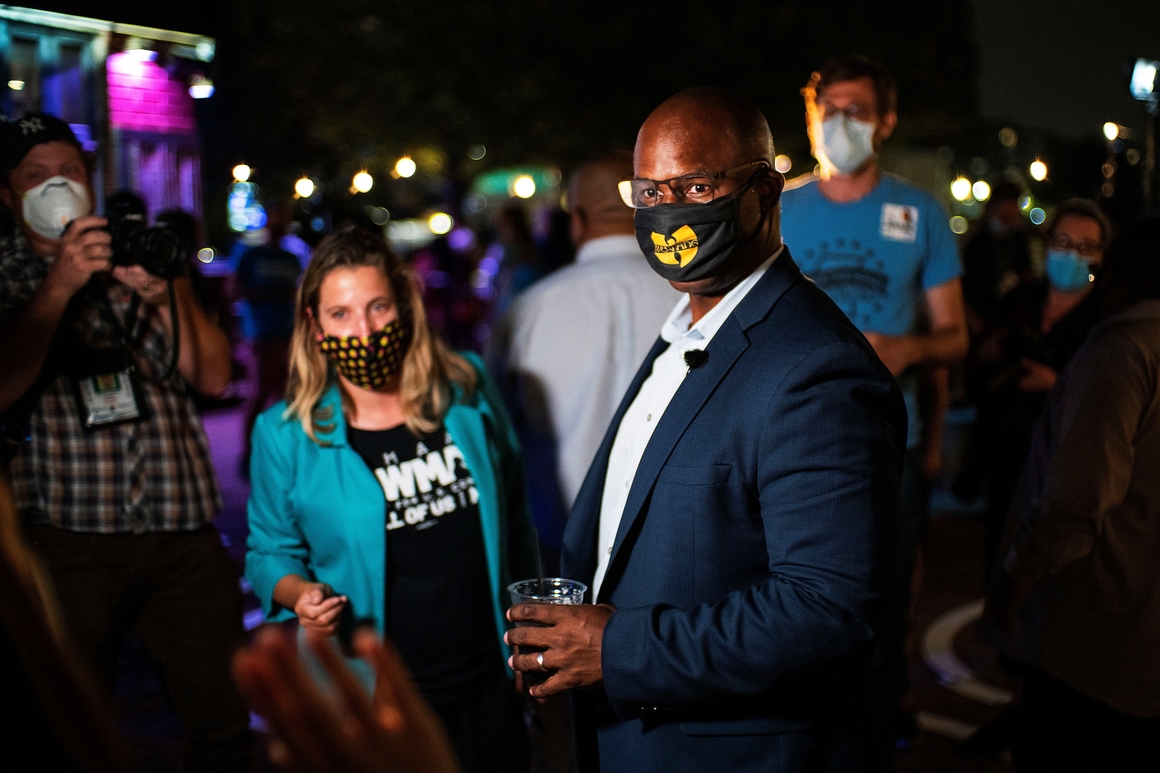 The end is near for Rep. Eliot Engel

Unless Engel’s supporters are as obsessive about mail voting as he used to be about snagging an aisle seat for the State of the Union address, his time in the House is over.

The Associated Press did not project a winner Tuesday night between Engel and middle-school principal Jamaal Bowman, but the numbers were daunting for the incumbent: Bowman led 61 percent to 36 percent, with 36,000 votes tallied so far.

In the last election, only 31,000 votes were cast in the Democratic primary in the district. And even though turnout is reported to be way up this year, Engel would still have to win the outstanding votes by a huge margin to survive.

Bowman stopped short of declaring victory in a speech to supporters in Yonkers, but said the results showed the district is “demanding change.”

If Engel loses, he will be at least the second veteran Democrat in New York City to be ousted in as many election cycles. (Rep. Carolyn Maloney is also facing a close primary in her district.) And like Joe Crowley two years ago, the end came suddenly for Engel. While Crowley was falling to Ocasio-Cortez in 2018, Engel was cruising through a four-candidate primary with 74 percent of the vote.

The president’s undefeated record in 2020 GOP primary elections came was shattered in North Carolina, and he might have his new chief of staff to blame.

Meadows’ surprise retirement announcement late last year quickly raised suspicions about whether he timed it to help Bennett, a friend of his wife’s, win the seat. He announced he wouldn’t run again the day before North Carolina’s filing deadline — but after the deadline for candidates for other offices to withdraw their petitions, meaning state legislators in the district couldn’t switch to run for Congress instead.

Wielding Meadows’ endorsement, Bennett finished first in the March 3 primary, edging Cawthorn, 23 percent to 20 percent. But she didn’t get the 30 percent needed to avoid a one-on-one runoff. Trump tweeted an endorsement earlier this month, which Bennett quickly turned into a TV ad. But it wasn’t nearly enough, and it robs Republicans of an opportunity to pad the ranks of GOP women in the House, after a recent string of victories by female candidates in Republican primaries.

Meanwhile, in Kentucky, Rep. Thomas Massie easily won his Republican primary, just months after Trump called for him to be thrown out of the GOP because Massie held up bipartisan coronavirus relief legislation. But Trump — seeing the writing on the wall — stopped short of endorsing Massie’s opponent, Todd McMurtry, who had only 12 percent support to Massie’s 88 percent in early returns.

It wasn’t a primary, but another Trump-endorsed Republican, Rep. Denver Riggleman, was ousted earlier this month in a district nominating convention in Virginia. Trump had endorsed Riggleman in a tweet late last year, but the majority of delegates picked social conservative Bob Good as the party’s candidate in the fall.

For the past few months, progressives fretted that large Democratic primary fields for two open House seats in New York would enable more conservative candidates to slip through and take over safe seats. But while neither the 15th District nor the 17th District was called Tuesday night, the left can breathe a little easier.

In the Bronx-based 15th District, City Councilman Ritchie Torres was in first place when the night ended, more than 10 points ahead of state Assemblyman Michael Blake and City Councilman Ruben Diaz Sr., a longtime antagonist of mainstream Democrats for his conservative views on social issues.

In the 17th District, in the Lower Hudson Valley, attorney and Obama-era Department of Justice alum Mondaire Jones was the leader in early returns, over self-funder Adam Schleifer and David Carlucci, a member of the breakaway faction of state Senate Democrats that kept Republicans in control of the chamber until 2018. Jones had the support of nearly every major progressive politician: Sanders, Ocasio-Cortez, Elizabeth Warren and the Congressional Progressive Caucus.

Meanwhile, while Engel is easily in the most trouble among incumbents, he won’t be the only sitting member losing sleep over the next week. Maloney ended Tuesday night with only a slight, roughly 500-vote lead over hotel executive Suraj Patel, whom she defeated in the 2018 primary.

Maloney, who took over as chair of the House oversight committee following the late Rep. Elijah Cummings’ death, had reason to worry, and she took the primary seriously. After failing to break 60 percent two years ago, Maloney went negative on Patel, running digital ads that called him “creepy.”

Faring better in initial returns was Rep. Yvette Clarke in Brooklyn. Two years after community organizer Adem Bunkeddeko came within 2,000 votes of ousting Clarke, the seven-term incumbent had a big lead in the Election-Day vote when Tuesday ended.